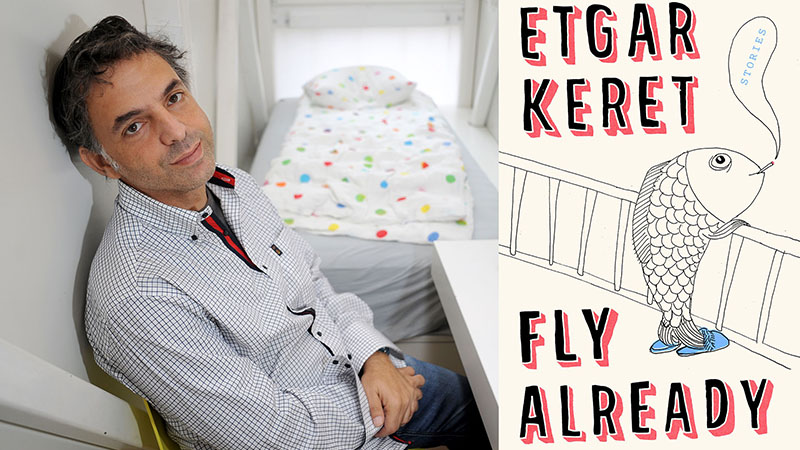 Etgar Keret on the Power Struggle Between a Father and Child

The Fly Already Author
on First Draft: A Dialogue of Writing

Etgar Keret: I partially agree with the interpretation because I think that when you tell stories it seems as if the child is in a position of power and maybe consciously does something manipulative, but I actually feel that in many of the stories both the child and the parent are lost. Even if there is this kind of the feeling that the child is leading the parent, I don’t think of it as a real sensation. I feel it more that it’s just another echo of the fact that the parent is lost.

For me, the biggest or strongest feeling that I have as a parent is that I’m supposed to function as some kind of an interface between my child and life. My child asked me, “Why do you do that?” and I say, “Oh, you do that for this and this,” or “Why do people ask me for money when I want to take a cake,” and “Ah, because we have the capitalist system, which was established in this and this year.” This is the kind of dialogue that I have with my son, and basically there was something about being a parent that kind of flashed out to me how little I know about life; both because I’m often kind of asked for explanations that I can’t give, and also, because sometimes I give those explanation and my son comes back to me and says, you know that what you said was totally wrong.

I can just give you an example. Before the American election, there was this incident when President Trump talked about women and said that he grabs them by the pussy. My son, who had seen that in the news, asked me, “What does it mean? And why does he keep showing it on TV?” I explained to him what the sentence meant, and I said to him that the man who said it was very rude and disrespectful … and now that they showed it to everybody then very few people would vote for him. He’s not going to be the President of the United States, and this was a very parental explanation that I gave in my very confident voice.

Three months later my son come in to me say, “Hey, Dad, you remember this guy you told me was not going to be elected for the President of the United States? Well, he got elected for the presidency.” For me, really, there is something about this kind of father-child relationship in the age in which we live in that … I think I understand less and less the world around me. This world keeps changing. I don’t completely get it. I’m trying to prepare my son to this world, but I guess I’m preparing him towards what was relevant 10 years ago.

These sensations … echo a lot in the stories. At the beginning of “Fly Already,” there is a father and child walking down the street, and the child recognizes a guy on the ledge of the roof of a building. While the father was thinking about committing suicide and wants to stop this guy from jumping, the child is very happy that he is going to see a guy flying from a building the way superheroes do. This kind of situation where two people are looking at the same thing, with the parent dreading and being totally scared and the child—like my son—feels this optimism about life and that everything is going to be great or become better, I think that it’s a sensation that returns in different ways in many of my stories and also in my life.

Etgar Keret is an Israeli writer of fiction, non-fiction, television and film whose work has appeared in The New York Times, Le Monde, The New Yorker, The Guardian, The Paris Review, and Zoetrope, among others, and over 40 short movies have been based on his stories, one of which won the American MTV Prize. His feature film Wristcutters also won several international awards. His short story collection Fly Already won the Sapir Prize for Literature in Israel. Some of his other titles include The Seven Good Years, Suddenly, a Knock on the Door, Four Stories, and A Girl on the Fridge. Keret’s books have been published in 42 languages in 45 countries.

The 10 Best Debut Novels of the Decade