Amid the Roman Ruins and the Search for a Lost City

VIA PEGASUS BOOKS
By Ferdinand Addis

A Roman night, February 1787. The air is clear. The full moon casts a frigid pallor over the city, striking an answering glow from the church domes that rise above the sleeping streets: the Gesù, Sant’Andrea della Valle, St. Peter’s, enormous in the distance.

It is late, and the city sleeps—laborers, shopkeepers, prostitutes behind their shuttered windows. Only towards the disabitato, Rome’s empty quarter, does any movement disturb the darkness. Out there, away from the medieval alleys and the Renaissance palaces, a curious party of travelers can be made out, picking their way across a broad patch of open space that stretches, desolate in the moonlight, out from the further slope of the Capitoline.

The campo vaccino, the Romans call it—the cow field, sometimes used for markets, a broad sweep of pasture, rutted with cart tracks, crossed by a double line of scrubby elms. The travelers step carefully in the dark, between heaps of mule droppings and cow dung that sticks to their boots. But here and there a moon-bleached outline breaks clear of the mud: to the left, the half-buried arch of Septimius Severus, a shelter for wandering goats; to the right, three columns of the Temple of Castor and Pollux—three white widows, supporting a corpse of mutilated architrave. Interred beneath this field, sunk in the black earth, are the remnants of the Roman Forum.

Here was a new wonder for the Romans to lampoon: tourists, rooted to the ground, staring in rapture at some filthy patch of muddy earth, some pile of weed-covered brick.

The travelers pass on, under the broken apse of Maxentius’s basilica, past the Arch of Titus where it sits embedded in a Frangipane wall. And now they pause. Here is the Colosseum, broken but still magnificent, its half-shattered ring of arcades rising mountainous over the wreck-strewn moonscape below.

It is quiet, but the ruin is not deserted. There is a hermit who lives under the arches, bothering the old bricks with his prayers. And some beggars too have found shelter among the vaults. They have built a fire of damp wood against the chill and, as the travelers watch, a breeze blows the smoke into the arena, seeping through holes and crannies, filling the bowl of the amphitheatre, heavy as sea mist. The beggars and their fire, the hermit and his prayers, all vanish into the cloud. All signs of life are extinguished, muffled in formless white. Only far above, the Colosseum still lofts its bulk, vast masses of light and shadow against the starry sky.

And the travelers, the tourists, are delighted. This is exactly the sort of thing they came to see.

Rome had always attracted travelers—pilgrims, lawyers, diplomats, churchmen, artists. But towards the end of the 17th century, a new idea began to take hold among the gentry of northern Europe: that a trip to Italy, and Rome especially, was an indispensable part of a noble education.

From Germany and France and Holland, and above all from prosperous Britain, a stream of young men—and a few women—handsomely equipped, heads stuffed with classical learning and apt quotations, set off southward on what came to be called the Grand Tour.

The journey was, one English clergyman wrote, like the “journey of life.” The pleasures of France were childish, of a “gay fluttering kind.” By degrees, as the tourist approached Italy, the experience became more solid and manly, culminating at Rome. After Rome, other destinations could only disappoint. The thrill of the tour declined until the traveler returned home at last with the habit of an old man: “being tiresome to his friends, by a perpetual repetition of past adventures.”

The energy of the city could be felt among the hawkers and mountebanks of the piazza, the beggars, the street performers, the puppeteers.

The Grand Tour certainly could be adventurous. The crossing of the Alps was a major undertaking on its own: the long ride upwards by precipitous roads; narrow bridges spanning torrents that crashed foaming into the abyssal depths; the bitter cold of the high passes. Then the descent, white-knuckled tourists wobbling in sedan chairs, or hurtling down by sled with their hired mountaineers whooping behind.

Italy brought its own hardships: hours rattling along in public coaches, on paving that might have seen two thousand years of continuous use. It was wise to travel armed in case of highwaymen, with a sword and a brace of pistols. Prudent travelers brought special iron contraptions to block their bedroom doors against cutthroats at the dubious roadside inns.

And what inns! “No words can express the wretchedness,” one tourist remembered: damp sheets, straw beds, “infinite numbers of gnats, bugs, fleas and lice.” The food was miserable beyond imagining: soup with bits of liver, a dish of brains, the carcass of some roadside fowl, “boiled to rags” and served on filthy pewter.

The Campagna outside Rome made a similarly unfavorable impression on traveling British squires. What had once been some of the richest countryside in Europe was now a bandit-ridden desert, scarred by centuries of despotism and war. Letters home to England are full of regretful musings on what might be achieved with such land by the application of good Protestant labor and modern agronomy.

Englishmen arriving in Rome were always struck by the backwardness of the place: Edward Gibbon, arriving in the city in 1764, remarked that the population, not more than 170,000, was “far below the measure of the great capitals of Europe.” The construction boom of the extravagant 17th century had depleted papal resources. Smoke and grime had blackened those gleaming counter-Reformation façades. Anyway, for Gibbon and his ilk, all that recent splendor only served to recall “the abuses of the government”: Rome’s palaces were “costly monuments of elegance and servitude,” of the corruption of fat cardinals and papal nepoti. The arts of architecture, sculpture and painting, all the expensive tools of baroque display, were judged to have been “prostituted in their service.”

Away from those palaces, the desperate condition of ordinary Romans assaulted the senses of northern visitors: crowds of monks and beggars, thin children, dingy houses, the ever-present smell of dung and “garlick.” Nor was the travelers’ mood improved by contact with Rome’s larcenous customs officers, headquartered in an old temple of Hadrian near the Piazza Colonna. Thither the English were conducted in their carriages, red-faced with helpless fury as their luggage was subjected to the special diligence of unbribed officialdom.

At last, after two or three hours of such treatment, the unlucky tourist might be allowed to retreat to his lodgings. There were rooms to be had around the Piazza di Spagna—the English ghetto, as it was jokingly called. Foreign artists had long haunted the area, picking up life-drawing models who touted for business on the Spanish Steps, the ornamental staircase that connected the piazza to the church of Trinità dei Monti. Now the tourists moved in: cafes on the square were loud with English voices, the clink of glasses, the clack of billiard balls. A whole expatriate society could be found there, from humble artists and architects to the most exalted aristocracy. The Old Pretender, King James III of England, as he styled himself, could occasionally be glimpsed—or, after James’s death, his son Charles, “Bonnie Prince Charlie,” defeated but still insisting on the obsolete Stuart claim.

A little of Rome’s vitality now revealed itself. The energy of the city could be felt among the hawkers and mountebanks of the piazza, the beggars, the street performers, the puppeteers. For many young tourists, Rome’s famous prostitutes were a major diversion. James Boswell, on Ash Wednesday 1765, resolved to have a new girl every day while he was in the city. Inspired by the ancient love poets of Rome, he “sallied forth of an evening like an imperious lion” to take the women of the city in his jaws.

Ash Wednesday was just after the Roman carnival, which might explain why Boswell was so overheated. To educated tourists, the antique Saturnalian spirit that animated the carnival was perfectly clear. The Romans took their carnival liberties with a confidence born of centuries of unbroken tradition. Grandees dressed up as beggars. Men dressed as young women mingled saucily with the crowd. Young women appeared at the opera dressed as military officers, flaunting their epaulettes. Priapic pulcinellas waggled their horns at Roman matrons, or fought mock battles with their rivals the quaccheri, whose costume imitated the severity of Quaker dress. Boys blew shells like horns. Lovers pelted each other with sugared almonds. Girls defended themselves with bunches of reed blossoms, gathered into a broom.

“After a sleepless night, I trod with a lofty step the ruins of the Forum: each memorable spot where Romulus stood, or Tully [Cicero] spoke, or Caesar fell, was at once present to my eye.”

The streets were filled with outlandish costumes: theatrical, mythical, satirical. One man was got up as an obelisk. Another as a crooked lawyer. Another as a conjuror. Another as a ghost, draped in a bedsheet. A particularly good joke was to adopt tourist dress: a flapping frock coat and giant artist’s pencil; an affected grimace worn under a pompous northern hat.

This was all very droll. But it was not what had drawn the tourists to Rome. “A new race of pilgrims,” as Gibbon put it, “from the remote, and once savage countries of the north,” had descended on the city, not to sample its present delights but rather to tread “the footsteps of heroes,” to see “the relics, not of superstition, but of empire.”

“I can neither forget nor express,” wrote Gibbon:

The strong emotions which agitated my mind as I first approached and entered the eternal city. After a sleepless night, I trod with a lofty step the ruins of the Forum: each memorable spot where Romulus stood, or Tully [Cicero] spoke, or Caesar fell, was at once present to my eye.

Here was a new wonder for the Romans to lampoon: tourists, rooted to the ground, staring in rapture at some filthy patch of muddy earth, some pile of weed-covered brick. Educated tourists, steeped since early youth in Livy and Virgil and Cicero, could travel to a city that was invisible to many of its own inhabitants—a lost Rome springing up before their eyes from the tumbled rocks.

Just as the tourist city was invisible to the native Romans, so the present-day reality of Rome sometimes faded from tourist sight. Gibbon describes, in a famous passage, the moment when he decided to write his Decline and Fall of the Roman Empire, “musing amidst the ruins of the Capitol, while the barefoot friars were singing vespers in the Temple of Jupiter.” But there were no ruins visible on the Capitol in 1764, when Gibbon saw it. On the contrary, the piazza on top of the hill was a very fine architectural space, designed by Michelangelo himself and surrounded by palazzi. The church of the Aracoeli, in which the friars were singing, might have had a pleasingly melancholy aspect but it certainly was not, nor ever had been, a Temple of Jupiter. No matter. For the tourist, what Rome was could never be allowed to obstruct the view of what Rome was supposed to have been. 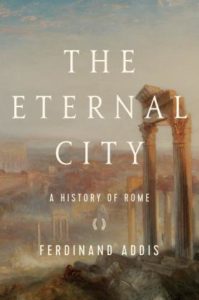 From The Eternal City: A History of Rome. Courtesy of Pegasus Books. Copyright © 2018 by Ferdinand Addis.

Ferdinand Addis read classics at Oxford, before embarking on a career as a journalist and author. Following three short books for Michael O'Mara, Rome: Eternal City is his first full-length work of non-fiction. He lives in London with his wife and daughter. 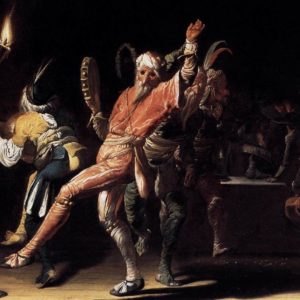