Ashley Hay on the Scandinavian Concept of Vardøger

My writing has a lot to do with walking. Often, the simple act of stepping away from my desk helps me to start things or finish things or frees new things up. I’m fond of Rebecca Solnit’s idea that the speed of thought is roughly pedestrian—around three miles an hour—but I’m not sure if it’s that velocity, or the fact of any motion in a sedentary job, that allows me to feel like I’m still writing as I’m on the move. I used to walk along the coast when I lived in Sydney. These days, living more than 600 miles north in Brisbane, much of my walking occurs between our house and our son’s school, a scant mile away.

The road beyond our place splits into a complicated geometry. The main road runs in two directions divided by a neatly clipped median strip, while a brushier strip divides this busier route from another that runs parallel. The roundabout further on has five feed-ins—it’s a bugger to navigate by foot—beyond which, these fractured roads fracture again.

On a map, it’s a sailor’s knot of complicated forks, divergences and intersections.

Few things are more habitual than recovering a small person from school. Almost every afternoon, in my son’s earlier school days, I passed another small blonde boy walking home down the hill as I went walking up. He had the look of first-year high school—his bag a bit too big; his face a bit too young above the crisp white maturity of his uniform shirt. After we’d passed once or twice, I smiled at him, and he smiled in return. Good manners on his part, I reckoned. But I was smiling for another reason too.

The thing was, he looked profoundly like my son—a twelve-year-old version, say, of the six-year-old I was walking to collect. Right hair; right smile; right level of bounce. We passed each other, we smiled hello. It was so perfect a coincidence, I could never have made it work in fiction.

There’s a funny thing that happens sometimes when you’re writing fiction. The covert—or overt—transfer of life into art is well-known and well-documented. A piece of the real world might be moved onto a page to populate a fiction, recast slightly, greatly, or not at all. But sometimes it feels as if the transfer can happen in the other direction as well, from art into life, so that something fabricated for the page manifests—surprise!—in the novelist’s real world. In the novel I was conjuring as I went up to school and back, I was working with a creature called a vardøger, a Norwegian idea of a premonition, a future version of yourself doing what you will do, some way off.

I’d found these vardøger in the most 21st-century way. I needed a not-quite doppelgänger—an other that invoked alternatives and untaken options, or selves that were just up ahead—for the book I was spelunking, and so I typed up exactly that search. Not only did the algorithm present me with this Scandinavian solution, the earliest explanation I read of this phenomenon was also uncannily close to what I was making my character go through. Imagine you are waiting for somebody to come home. You hear them come through the gate; you hear them walk up the stairs. Then they are not there. But ten minutes later, you hear the same sequence of sounds—and there they are, coming in through the door.

A vardøger: not quite a double, but an anticipative self.

There weren’t many references to vardøger in other literature. They cropped up in an encyclopedia or two and some books of myths and legends, and there was a paper in the Journal of Scientific Studies by someone who’d experienced this syndrome twice themselves. At my desk, I sat and worked up this idea to gift it to my character, Lucy Kiss. On the road, as I passed this young, blonde schoolboy, I wondered if the world—or one of its synchronous, trickier realms—was giving me a sort of vardøger of my own. I took him for an iteration of my boy, safe and sound in the years to come.

And Lucy Kiss’s story—the novel that became A Hundred Small Lessons—did end up quite busy with vardøger. It’s concerned with some of the people we don’t quite become, the alternative selves that spill out when we encounter what the Australian novelist Julienne van Loon so wonderfully describes as “that moment of pause—because the decision you have made has implications for so many things that will follow.” The “people we mistake for ourselves,” as John Burnside calls these beings in his poem “III. De Libero Arbitrio.” I’d imagined this line as the novel’s epigraph from the first moments I’d spent in its space.

Around this time, in the first half of 2014, I wrote a piece for a Women of Letters salon in Brisbane. These events have hosted readings of hundreds bespoke letters (ours had to address “a fork in the road”) for more than seven years in various Australian cities as well as the UK, Europe and, now, monthly, in New York. And as I thought of forks, I thought about the tangle of roads I walked on each day—more like a messy drawer of cutlery—and this premonitory boy who I met there. I thought of what must be one of the most universal desires of motherhood, anywhere and any time, to know that your child will travel well and be ok. I wrote a piece, “Walking Towards the Future,” to read to a room of several hundred people on the first day of that year’s southern winter. “To see you on this road,” I wrote, “sometimes passing me, sometimes already on another one of its branches: these moments give me a small snuggle of ease.”

And after the reading, that was it. My slightly bigger blonde-haired boy disappeared.

It was as if he’d dematerialized: I simply never saw him on my weekday afternoons. I scanned other footpaths; I started checking driveways, front yards. I had a terrible suspicion that by putting him into the world, by talking about him, I’d unmade him somehow.

I worked hard on reasonable explanations: he had a new schedule; he had a new house; or he was playing extra sport now, after school. It was hard work not to mind. But then I got lost again in the novel, and I stopped checking for him in cross-streets as I walked.

Earlier this year, heading out to collect my now-eight-year old boy, I looked up from the path—and there he was. My boy’s vardøger. Older. Easier. With a scruffier hairdo and a skateboard tucked under one arm. I smiled; he smiled. Our trajectories clicked back in step. When I got home that day, the first finished copy of A Hundred Small Lessons was sitting, waiting, at my door.

These moments of synchronicity, when the real world manifests something so perfect it feels like it has to be fiction—and manifests a thing that I’ve made up: they happen more often than I can fathom and they always make me smile. I took this one as a small nod to the completion of the book.

“When will I get a skateboard?” my own son might ask, and I might say, “when you’re that big”—pointing to the boy I’ve cast there as an older incarnation of him, and knowing that my real boy will never quite catch up to where his other is. These vardøger, these doppelgängers: these stories make us feel we’ve got some knowledge of the future. They make us feel we know what’s coming from the other side of the hill.

And any mum I know wants some of that.

A Hundred Small Lessons is available now from Atria/Simon & Schuster. A version of Ashley’s first essay about vardoger was included in Signed, Sealed, Delivered, the seventh collection from Women of Letters, edited by Michaela Maguire and Marieke Hardy (Penguin/Viking).

Ashley Hay is the author of the novels The Body in the Clouds and The Railwayman’s Wife, which was honored with the Colin Roderick Award by the Foundation for Australian Literary Studies and longlisted for the Miles Franklin Literary Award, the most prestigious literary prize in Australia, among numerous other accolades. She has also written four nonfiction books. She lives in Brisbane, Australia.

Some Baffling Omissions From the NY Times' 100 Notable Books List 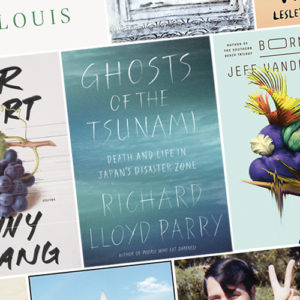 Some Baffling Omissions From the NY Times' 100 Notable Books List

Earlier this week, the New York Times unveiled its annual list of 100 Notable Books. As was the case last year, some clearly...
© LitHub
Back to top