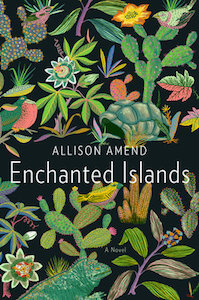 The following is from Allison Amend’s novel, Enchanted Islands. Allison Amend, a graduate of the Iowa Writer’s Workshop, is the author of the novels A Nearly Perfect Copy and Stations West, which was a finalist for the 2011 Sami Rohr Prize for Jewish Literature and the Oklahoma Book Award. She is also the author of the Independent Publisher’s Award-winning short story collection Things That Pass for Love.

You’re not allowed to read this—I’m not even really allowed to write it. But now that Ainslie is gone and I will surely follow before too long, I don’t see that much is the harm. I suppose the government will censor what it will.

A curious effect of childlessness is that your story disappears with you. Of course, everyone’s does eventually, but the suddenness with which my history will be extinguished causes me much consternation. I am of the generation who came of age in the new century, though my formative years were spent in the last—I am therefore pulled between the past and the present.

That my life will be of interest to readers I dare not assume. But it is an unusual one, and for that reason alone record should be made of it.

It is the usual manner with these memoirs to begin at the beginning and head toward the end, so I will start with my name: Frances Conway. It was not always thus. Still, this is the name you will read on the placard that is outside my room. I was born on August 3, 1882. I will save you the math—I am eighty-two. It is only thanks to Rosalie’s largesse that I can spend my last years in relative comfort in a private “retirement home” rather than one of those paupers’ adult day cares.

At mealtimes I am supposed to go to the dining hall where the Mexican nurses serve food that is inoffensive to any palate, which is to say, offensive to all. They are surprised that I speak Spanish. I am in complete possession of my faculties, as much as I ever was. It is merely the corporeal situation that is in disrepair—my hands twisted like muyuyo branches and my back as bent as a burro’s. I have to wait for someone to push me in my wheelchair if I want to go anywhere, and that stands in contrast to my days in the Galápagos when it was nothing to walk three or four hours for a chat or to get the mail.

Rosalie is already waiting for me at our table, her walker at attention like an obedient dog beside her. She has started on her soup, and I can hear the slurping from here, an annoying habit she picked up after getting dentures. She waits for me to get situated, but I can tell she has something to say. Her head is cocked toward me, her eyes unnaturally bright.

Lourdes puts an identical plate of soup in front of me, but then, seeing the glare I give her, takes it away.

“Listen, Fanny, you’ll never guess, but there’s a ceremony for me!” “What kind?”

Lourdes returns with a plate of what must be food, though its origins are mysterious. Chicken? Potatoes? I pick up my fork and poke at it.

“I’m to be honored.” Rosalie has a bit of soup on her chin. I motion to her to wipe it and she does so, without breaking her story. “Hadassah of Northern California. They want to celebrate my war work.”

“War work?” I ask. I never knew that Rosalie ever worked, especially not for the war.

“It’s the twentieth anniversary of the end of the war. Can you believe it? Twenty years already.”

“What are they honoring you for?” I ask.

“Fanny, pay attention!” Rosalie drops her soup spoon into the bowl. It clatters, causing those with the mobility to swivel their heads in our direction. “Do we need to get you an ear trumpet?”

I frown at her. “But I don’t understand what you did in the war that deserves honoring.”

“You were there,” she says. “You were there at all those fund-raising parties for Israel. Do you think that state just appeared out of thin air?” I put down my fork. I’m not going to eat this mush.

“Throwing parties is war work?” I see Gloria making her hobbling way toward our table.

“Who?” Rosalie leans toward me. Her vision is not the greatest. “Gloria.”

“Oh Christ.” Rosalie sighs. “We’re waiting for Jemmie, tell her.” “You tell her,” I whisper back.

“Huh?” Rosalie says I need an ear trumpet, but it’s her hearing that gets worse at convenient times.

“Gloria,” I say, “so nice to see you. Sorry you can’t join us. We’re supposed to have a meeting with Jemmie.”

I feel a bit bad for Gloria as her face falls in disappointment. But I can’t sit through another meal with her dribbling food into her lap and hearing about her successful grandchildren who are always planning to see her but then never quite make it. Here in the retirement home we are nearly all women. The few men in residence are even more decrepit than we old hens. They are cocks of the walk. The younger women mill about, fawning over these toothless skeletons as though they were meat worth catching.

“A meeting for what?” Gloria is from New York, and sounds like she’s a carnival barker.

Rosalie has turned back to her soup, leaving me to deal with the consequences. “For the . . .” I rack my brain. “Rosalie, what’s the name of it again? My memory fails me.”

“Oh, the CFC. The Condolence Flower Committee.” Rosalie has always been good with a quick lie.

Gloria has already begun to turn away, a process not unlike that of a giant tortoise, as she says, “Well, I’ll leave you to it.” No one wants to be on any committee that has the word condolence in it. Not in Chelonia Manor.

We call it that because the first day, after witnessing the interminable shuffle to get to the dining hall, I said, “It’s a chelonian stampede.”

Rosalie thought this was hysterical, and from then on we lived at Chelonia Manor.

When Gloria’s finally out of earshot, Rosalie giggles.

I shush her. “What if she hears? Now we have to form a Condolence Bouquet Committee.”

“Flower,” Rosalie says. “No we don’t. She’ll forget. Can you please pass the bread?”

Rosalie has become quite plump since we moved in here. I, on the other hand, am my usual skin and bones and tendons. The last time I saw Rosalie heavy was when we were children. Since then, she’s always been vain about her appearance.

I take a piece of bread for myself. It’s a generic white biscuit, but I’ll put some butter on it. Unsalted butter, of course.

“Ay, Señora Conway, pero, no come nada!” Lourdes says to me in mock concern. I tell her my plate is still full because the food is tasteless, artificial, though it pains me after those years of near starvation to waste even a morsel. She tells me in a stage whisper that they have beans and rice in the kitchen for the empleados. She brings me a plate. It is not in the style of Ecuadorian food, but at least it was growing recently, and it is nice and salty.

“No se lo diga a nadie,” Lourdes warns. Really, who cares if someone my age eats salt or doesn’t?

Rosalie and I have lived at the Chelonia in Los Gatos, California, near San Francisco, for two years. We both survived our husbands, though mine was more than a decade younger than I. When Rosalie fell and broke her hip, her son insisted she move in here. So I did too.

It is one of nature’s great injustices that once you have carried out your purpose on earth you are not worth feeding anymore. We saw this daily in the Galápagos, where animals gave their elderly parents no more thought than the bones of the animal they’d just licked clean.

I don’t want to let Rosalie’s announcement go. “I didn’t see you do anything during the war that you weren’t already doing before the war or that you didn’t continue to do after the war.”

“Then you weren’t paying attention. Clarence and I brought over several refugees from Europe. And I knitted. I was constantly knitting.”

I have no memory of Rosalie knitting. I do have a memory of helping her and the maid put up bunting for VE Day, which apparently is twenty years ago next month.

A belch of jealousy burbles up inside me. Rosalie is to be honored. It was always thus, that Rosalie was in the spotlight while I sat in the wings, but this in particular galls me. I am the one who truly served my country during the war. I am the one who stayed in a marriage for the sake of my country, who came close to losing my life for it. And I can tell no one.

“Congratulations,” I say. “Is it a party?” I suspect that Rosalie hears the green-eyed monster in my voice, but she has seventy-five years of practice ignoring my uncharitable sentiments.

“A ceremony at the synagogue. They’re sending a car for me. I hope it’s a limousine. I’d love to see these old biddies’ faces when I drive off in a limousine.” Actually, I’d like to see that too. I had no idea that a nursing home would have more cliques than a middle school. “Of course you’ll come, Fanny. I’ll insist. They wanted me to give a speech, but I told them I couldn’t possibly. They nearly insisted until I explained I can’t stand for long because of my hip.”

“You’re not that hip,” I say, and Rosalie, quick as ever, laughs at the joke.

From ENCHANTED ISLANDS. Used with permission of Nan A. Talese. Copyright © 2016 by Allison Amend. 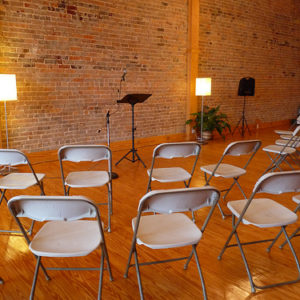 A Literary Folk Hero is Born: The Tale of Merrijoy and the Empty Chairs Five years ago, I gave my first reading as a published novelist. It… well, it didn’t go as planned. Only two people showed...
© LitHub
Back to top