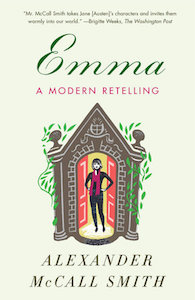 The following is from Alexander McCall Smith’s novel, Emma: A Modern Retelling, now available in paperback. Alexander McCall Smith is the author of the No. 1 Ladies’ Detective Agency series, the Isabel Dalhousie series, the Portuguese Irregular Verbs series, the 44 Scotland Street series, and the Corduroy Mansions series. He was born in what is now known as Zimbabwe and was a law professor at the University of Botswana. He lives in Scotland.

Emma had given some thought to how she might invite Philip Elton and Harriet Smith to tea at the same time without making the invitation look suspicious. She wondered whether she could persuade Harriet to join her on a small, impromptu committee to raise money for a suitable charity, and then ask Philip to address them on the relative merits of the various local charities. As a vicar, he could be expected to know all about charities, even if, as Emma suspected, he was not excessively charitable himself. That would bring the two of them together without raising Philip’s suspicions; if Harriet herself suspected anything, that would not matter—her compliance, Emma thought, could be assumed: Harriet was not one, she thought, to make any sort of fuss.

Of course, she had already lost one valuable opportunity for this particular piece of matchmaking. This had come at her dinner party, at which they had both been guests, but at that stage her plans for Harriet had been inchoate and the seating plan had not brought them directly together. She tried to remember whether the two of them had exchanged any words at all that evening, but she could not recall seeing them talking to each other. He must have seen her, though; no man could sit near Harriet Smith at a dinner table and fail to notice that he was in the presence of exceptional physical beauty. And if he had noticed her in that way—which he must have done—then she would not have much work to do. All that would be required of her was the facilitating of a meeting; nature, passion—call it what you will—could be expected to do the rest.

Emma decided not to bother with a pretext; she would simply invite both of them to tea, though not at exactly the same time—Harriet would be invited slightly early, so that certain ideas might be placed in her head, and then twenty minutes or so later Philip Elton would arrive. If either felt manipulated, then so be it; resentment would in due course be replaced by gratitude as each of them realised what the occasion had led to. In Philip’s case this would be an introduction to a young woman far more attractive than he could normally have expected to encounter; Philip, for all his interest in Byzantine history and his good looks, was not exciting company, and his boring conversation and irritating views would limit his social opportunities. So he would be grateful, thought Emma. And then, as far as Harriet was concerned, the financial problems that so constrained her would be convincingly solved: Thailand, India, and indeed all those places in which well-funded gap years might be spent, would suddenly be open to her, along, of course, with rather better clothes—and shoes, it must be said—than she had been up to now been able to afford. Many people made such a bargain and endured the consequences stoically and with good humour, putting up with tedious and opinionated men in exchange for material comfort. Emma would never do that herself, of course; but she had no need to—she was well off; so well off, in fact, as not to require a man at all.

“Oh, I’d love to come to tea with you, Emma,” enthused Harriet over the telephone. “It’s just what I need. We’ve just said goodbye at Mrs. Goddard’s to a whole lot of students and I’m feeling a bit flat.”

“Off to the railway station?” said Emma. “Well, at least they’ll know how to ask the way.”

“Ha!” said Harriet, and then, after a short pause, added,” I hope they do. I’m a bit worried about some of them. One of them couldn’t get the hang of the future tense and spoke entirely of the past. I’m really worried about him.”

“It could be difficult,” agreed Emma. “He probably won’t get very far.”

“Yes. I never really found out much about him. We had lots of conversations, but I’m not quite sure whether he was talking about things that he had done a long time ago or whether they were things that he wanted to do.”

“In your Mini Cooper?”

Harriet was excited. “Oh, that would be so nice, Emma. I’ve never been in a Mini Cooper.”

“Well, now’s your chance,” said Emma, rolling her eyes at her friend’s naïve enthusiasm; she was just like a ten-year-old schoolboy eager for a ride in a fast car. “I’ll come over to Mrs. Goddard’s at three.”

“You know where it is, don’t you?” said Harriet. “At that disused airfield. There’s a sign that says Hangars and then there’s one that says Mrs. Goddard’s Academy of English. You follow that road. I live with Mrs. Goddard in the building that’s labeled Principal’s House. It used to be the officers’ mess in the days when the RAF were here.”

Emma looked thoughtful as she put down the phone. If she had any lingering doubts about her intervention, these were now dispelled by the thought of Harriet’s current circumstances. To be living on a disused airfield—what a fate for anybody, even if it would be precisely the sort of domestic circumstances to secure a place at an ancient university. And the company . . . Presumably when the students went away, as they had just done, Harriet was left alone with Mrs. Goddard, with whom she would have to make conversation in the evening over dinner. There was no Mr. Goddard, as far as Emma knew, and she imagined the two of them sitting at the table, facing each other, searching for subjects to talk about while swallows and house martins, tiny Spitfires perhaps, dipped and swooped in the dusk about the eaves of the old officers’ mess and the crumbling control tower.

From EMMA: A MODERN RETELLING. Used with permission of Anchor. Copyright © 2016 by Alexander McCall Smith.

Can the "Literary" Survive Technology? 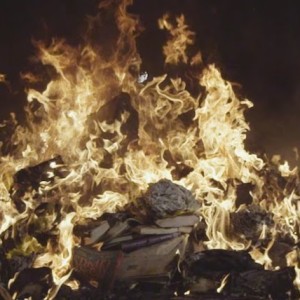 Can the "Literary" Survive Technology? Speaking at the Lahore Literary Festival early in 2014, Pakistani novelist Mohsin Hamid, author of The Reluctant Fundamentalist...
© LitHub
Back to top