The following is excerpted from Kim Thúy's novel, Em. As well as being a writer, she has degrees in translation and law and has worked as a seamstress, interpreter, lawyer and restaurant owner. Her debut novel Ru received a Governor General's Award in 2010. Fischman is the award-winning translator of some 150 contemporary novels from Quebec. In 2008 she was awarded the Molson Prize in the Arts. She is a Member of the Order of Canada and a chevalier of the Ordre national du Québec. She lives in Montreal.

The Servant Girl and Alexandre

Alexandre’s servant had waited more than two decades before rising to the position of nanny when Tâm was born. She was the only one to have survived the storms, outside and inside, the boundless despondencies, the senseless excesses of her employer. She could read the worries in the sound of his heels on the tiles. She alone sensed the burden of his homesickness and his resistance to putting down roots in Vietnam. In the beginning, he had worn his jacket and behaved as an engineer in front of his predecessors with their shirts half-open, wrinkled, and soiled. He forced himself to sit up straight in his chair to avoid developing the loose tongue of his compatriots. Unlike the older owners, he plunged his hands into the red earth to feel it at the same time as the natives. But slowly, perniciously, his body began to resemble that of his counterparts. Unconsciously, he had little by little let his hand come down on the backs of his coolies’ necks, blaming them for a drop in production instead of inspecting the poisoned roots of his trees. He became an old warrior worn down by monsoons, by financial uncertainties and disillusionment, resembling the other owners more and more.

At the age of fifteen, a single mother separated from her child, the servant girl became his employee. She started as the maid of the maid of the head maid. She was the last to eat the remains of meals—even if it was she who had plucked the chicken, scaled the fish, and minced the pork. On the day her immediate superior left, she inherited the cleaning to be done in Alexandre’s bedroom: in other words, it was up to her to see to her employer’s well-being without attracting notice. Studying the folds in his sheets, she could tell on what nights his worries had frozen Alexandre on the edge of his bed, head between his hands. Noting the presence of ebony hairs and the places where they were found, she could almost describe the choreography of his love-making. The years spent in Alexandre’s wake taught her his logic when it came to hiding some of his savings. She became the guardian of a great book emptied of its pages and packed with bundles of bills and gold rings strung on a chain that was also twenty-four carat gold. She checked the stiff cover every day to erase the marks of Alexandre’s fingers. This would make it hard for thieves to distinguish the volume from the others on the shelf. She was the shadow that followed Alexandre’s shadow. His guardian angel.

The Nanny and Tâm

Tâm’s arrival allowed the servant to take on the more maternal role of nanny, to rediscover the smiles she’d missed after leaving behind her own son with her mother in My Lai. Now the employees called her Chị Vú, or “big sister breast.” Rich women sometimes hired a young mother to breastfeed their child, so as not to deform their own breasts. The Vietnamese language is very modest, but the word breast is uttered with no hesitation or embarrassment, as breasts suggest no eroticism in this context. Since female employers rented the breasts of Chị Vú women, they were able to treat them as objects, demanding that they nurse the employer’s child exclusively. Some Chị Vú tried to run to their own offspring at nightfall, risking retaliation and dismissal. Most became attached to the infant they fed, because their own, to whom they’d given birth, lived fifty, or a hundred, or five hundred kilometres away. Employers relinquished their maternal privilege in the name of beauty, never suspecting that their children would become more attached to the scent of their Chị Vú than to that of the imported eau de toilette they sprayed on their skin.

The nanny did not breastfeed Tâm. She raised her, running after her with a spoon, transforming mealtimes into a game of hide-and-seek between two friends.

Tâm and the Lycée

In My Lai, Tâm’s nanny carried her on her bicycle, pedalling for kilometres to take her to piano lessons. She mended her pants dozens of times, rather than open the book full of rings and money that she’d made off with when they fled. During the day, she encouraged Tâm to take a seat on her school bench; at night, she protected her from curious gazes by having her lie down between herself and the grandmother.

To respect the wishes of Alexandre and Mai, she sought help from the region’s teachers to fill out the forms that would allow Tâm to take the admission exam for Saigon’s most prestigious school. The Gia Long Lycée had survived resettlements, occupations, and changes to its mission while still preserving its reputation. At the time it was founded at the beginning of the twentieth century, when it was called the College for Young Native Girls, the French language was compulsory, except during the two hours per week when Vietnamese literature was taught. A few decades later, teaching in the Vietnamese language was included in the courses, soon followed by English. Each year, only ten percent of the thousands of girls who arrived from all over to take the exam were admitted. The competition attracted the best because the graduates could marry well and, coincidentally, become activists or even revolutionaries.

The nanny was of the opinion that Tâm should leave My Lai for the city of Saigon, which would offer every opportunity, unlike the village that obliged her to be submissive, to hunch her shoulders in order to deflect the ugly words of gossips.

The day before their long bus trip, the nanny stayed awake all night to chase away mosquitoes and keep Tâm cool, gently waving a fan over her back; when the girl woke, a bánh mì with pork sausage, cucumber, and fresh coriander was waiting. She had also prepared sticky rice balls with fresh peanuts, wrapped in banana leaves. Then she had made packages of dried cuttlefish to give to the Saigon innkeeper, a former plantation worker.

The street in front of the lycée was teeming with mothers, aunties, women. During the two-day exam, the nanny obsessively rolled her rosary beads between her fingers. Needless to say, neither God nor Buddha could answer the prayers of all the people on the sidewalk, as they were hundreds of times more numerous than the available places. The nurse pleaded then with the soul of Mai, who ought to know the answers to the exam, since she had already passed this test.

When Tâm’s name appeared on the list of students admitted to the lycée, the nurse knew that Mai’s spirit had been watching over her daughter.

From Em by Kim Thúy, translated by Sheila Fischman. Copyright © 2021 by Kim Thúy. Excerpted with permission from Seven Stories Press.

Once There Were Wolves by Charlotte McConaghy, Read by Saskia Maarleveld 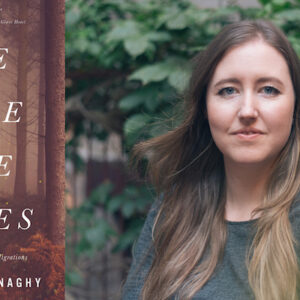 Once There Were Wolves by Charlotte McConaghy, Read by Saskia Maarleveld Every Monday through Friday, AudioFile’s editors recommend the best in audiobook listening. We keep our daily episodes...
© LitHub
Back to top