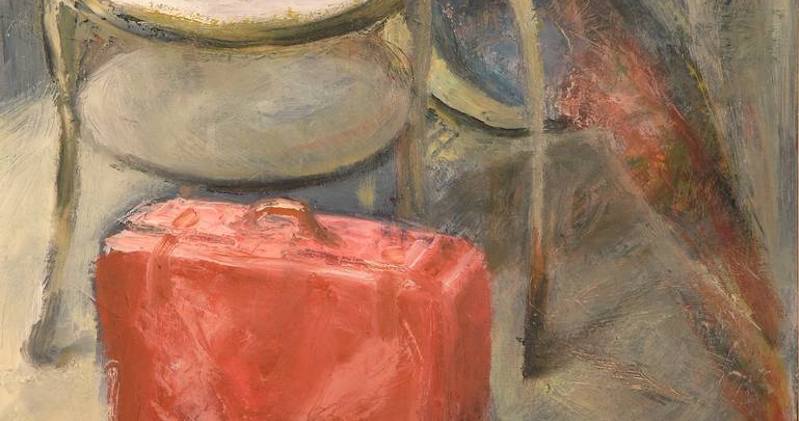 A Writer in Search of "the Tyranny of Inspiration.”

The beloved Brazilian poet Ana Cristina Cesar (1952–1983) lived in England between 1979 and 1981. During this time, she befriended the Brazilian artist Bia Wouk (my mother), who lived in Paris. The two women exchanged many letters during this time, and Ana C. (as she is known) sent Bia early drafts of a book of prose poetry that she was working on, called Kid Gloves.

Like much of her other writing, Kid Gloves reads like an intimate conversation or diary. In one letter to Bia, Ana C. confides that the book “is filled with clin d’œil, private jokes and a particular desire” and gives “the impression of a highly edited notebook (which is actually true, but I don’t say for the sake of fiction).” Along with this letter, she sent an early (slightly different) draft of the book’s “Epilogue,” which describes the narrator opening a suitcase packed with postcards from around the world. The scene recalls Ana C.’s own life of travel and passionate correspondence with friends.

After living in England for two years, in 1981, Ana Cristina Cesar moved back to Rio de Janeiro, where she was from. She immediately got to work on a new collection of poetry, titled At Your Feet. It’s considered her most important work and was the last collection she published in her lifetime (in 2018, Parlor Press published an English translation by Brenda and Helen Hillman with Sebastião Edson Macedo, edited by Katrina Dodson).

Ana C. continued to write Bia, describing moving into her “first house” in Brazil and sending a poem, “Vacillation of Vocation,” dedicated to Bia, that she will include in At Your Feet. That poem, about the “need to work,” echoes what she wrote to Bia in a letter from England in August of 1980: “I’m jealous of your discipline and sense of structure that came from before—I sort of remain under the tyranny of inspiration.”

Num minuto vou passar para vocês
vários cartões-postais belos e brilhantes.
I am going to pass around in a minute some lovely, glossy-blue picture postcards.
This is the leather suitcase that contains the famous collection.
Notice my hands, empty.
My pockets are also empty.
My hat is also empty. Look. My sleeves.
I turn my back, I spin completely around.
As all can see, there is no trick, no hidden trapdoor, nor any deceiving light games.
The suitcase rests on this chair here.
I open the suitcase with this master key in ceremonies like this, if you allow me such a game.
The first thing we find in the suitcase, on top of everything,
is—guess—a pair of gloves.
Here they are.
Kid gloves.
A fine thing.
I put on the gloves—left hand… right hand… perfect… cut.
That reminds me…
A young artist lost in the elegant Berlin of the Belle Époque, alone, looking in vain for pleasure. A clamorous group of skaters pass by, and a woman in white drops her glove, a glove with six padded buttons, white, long, perfumed. The young man runs, picks up the glove, but reluctant as to whether he should accept the challenge or not. In the end he decides to ignore it, keeps the glove in his pocket and goes back walking to his hotel through poorly illuminated streets.
But I’m digressing from my purpose tonight. Later, if there is time, I will conclude this fantastic story, in which even a Neptune carriage, a giant bat that smiles and always runs away, and an ocean of foliage make a cameo.
Who knows if this is not exactly that glove? However, we don’t have just one here, but the pair; it’s very delicate and contrasts with this black suit.
Will the leather valise contain various toiletries?
No, my friends.
As all can see, by gently rotating the chair on which it rests, the valise only contains paper… cards… dozens, maybe hundreds of postcards.
Strange valise!
And now, attention.
With my gloved hands—one moment while I button up one of them… and then the other… carefully… there’s no trickery here… I adjust my wrists, like this…—now with these hands, at random, I pick the first postcard, which I contemplate for a moment under the light… there’s a reflection… but I see here a woman drowned in reeds… I hand the first card, please pass them around… the second card: the Atlântica Avenue… go on passing them… Cadillac in Acapulco… Carmen… Pompidou Center… church in Alabama… castle seen from the Orient… two cupids in sunglasses… the jewelry thief and the duchess… and this one here, Fred Astaire in Lady, Be Good, or don’t misbehave, girl… nostalgic… and a Marilyn, and here the beach in Clacton with bingo and fish and chips… the Air France Boeing… the cable cars climbing the hill in San Francisco… a polar bear in the Barcelona zoo… Salomé… London… another Salomé… go on, go on passing them.
My friends, this is a valise, not a top hat with bunnies.
We have enough cards for the entire night.
Alexandria… Beirut… Prague…
Be mysterious, a painting by Paul… Gauguin, followed by What, are you jealous?, a trick question in a deceptive tone, as though sunbathing on the beach.
And from other museums here:
The eye, like a bizarre balloon, makes its way to infinity;
In the horizon, the angel of certitudes, and in the somber sky, a questioning eye;
The dame in despair;
The blood of Medusa;
The wicked mothers;
I lock the door on myself;
The kiss;
Another kiss;
Jealousy once again,
and now the true Moor of wuthering heights, followed by a curious sporty competition, and by some pornography, and by a father Cícero.
My friends, I don’t know where we’ll stop.
I continue passing around the cards more quickly. Look at these little stacks held together by a rubber band, and by the way I keep forgetting to say, you can and should confirm if on the back there are scribbled words, this one for example, “When will our next exquisite hours be?”, esquisita with an x, or this one here, “Copacabana Post 6, where I spent my childhood and adolescence, how it’s changed!”, or this other one, listen to this, “I keep trying to send you a little piece from where I am but something is always missing.” And one in very fine handwriting: “I calmed myself down, distracted myself, I don’t think so much, penso a te.” I think the end is in Italian. Go on reading, go on reading, most are blank anyway, excuse me.
I need to leave but I’ll be back soon.
A speck of dust in my eye, a small speck of dust; on the way back I keep removing cards from the suitcase, and who knows, at the right time, I’ll tell the rest of that true story, but before leaving I take off the glove, I leave it here on the back of this chair. 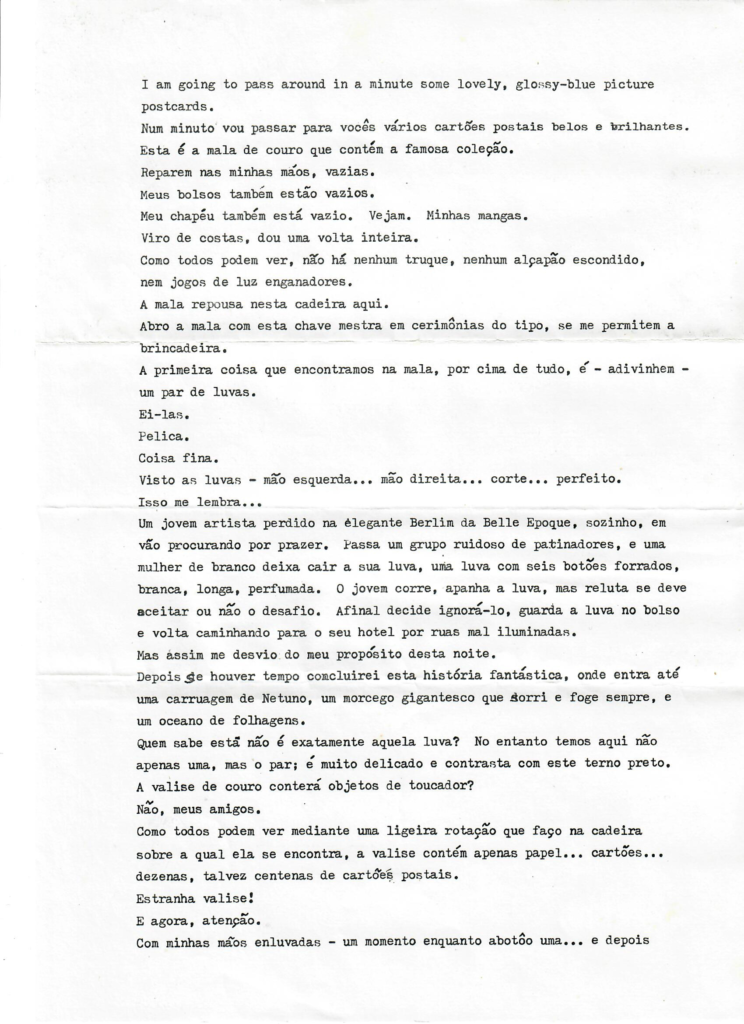 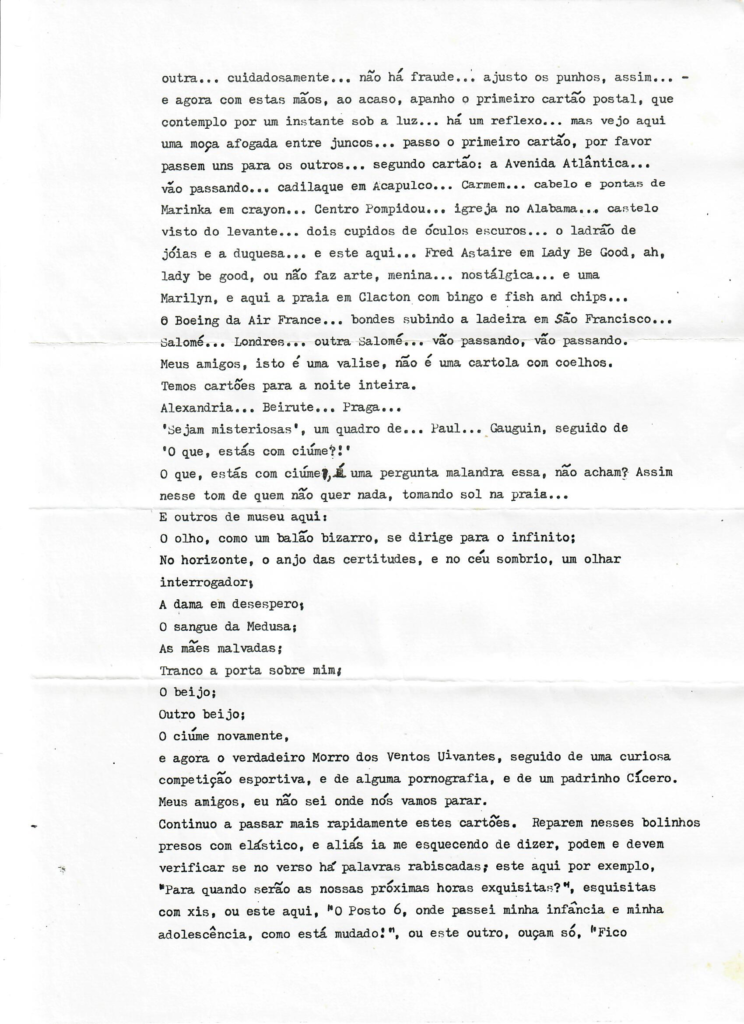 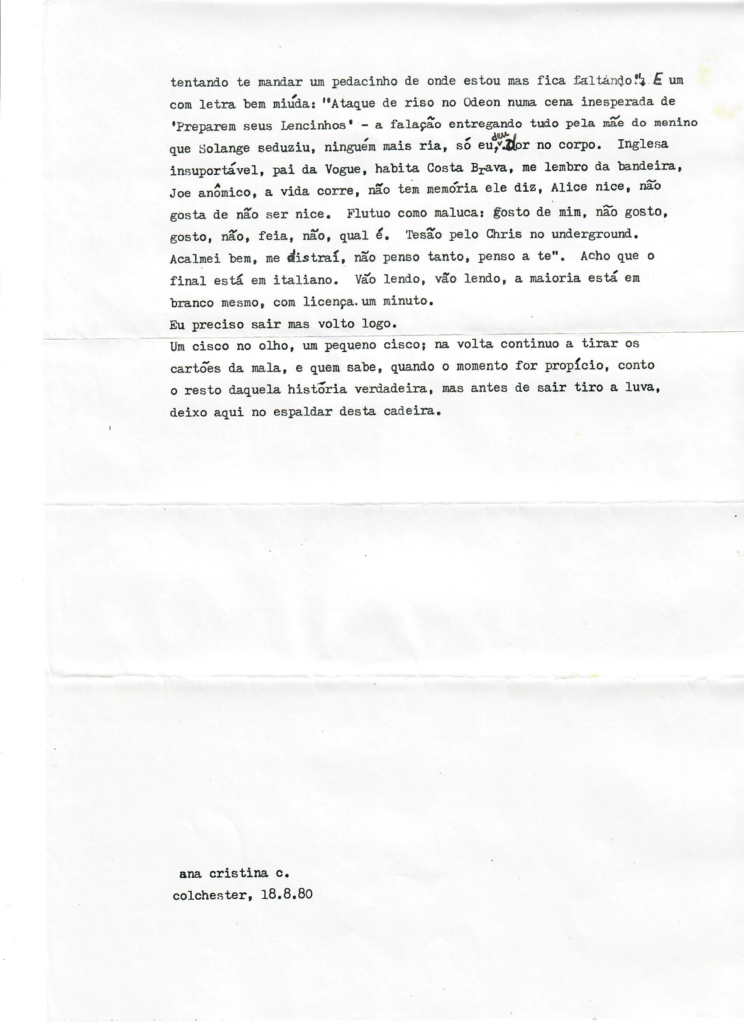 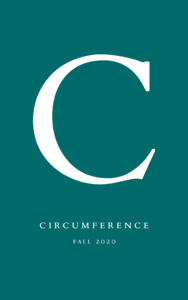 “Epilogue” appears in the Fall 2020 issue of Circumference, a journal of translation and international culture.

Elisa Wouk Almino is the translator of This House by Ana Martins Marques (Scrambler Books) and is a senior editor at Hyperallergic. She was a 2020 fiction judge of the Best Translated Book Award. Her translations and essays have appeared in the Paris Review, Lit Hub, NYR Daily, Asymptote Journal, Words Without Borders, and other places. 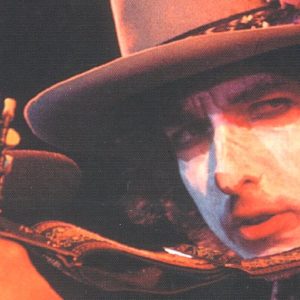 A while back I produced an album for an artist who recorded a cover of “Tangled Up In Blue,” an epic Bob Dylan song spanning...
© LitHub
Back to top
Loading Comments...