One of my earliest memories is of Grandma melting pieces of lead in a tiny pot and then pouring the ash-gray liquid into a bowl of salted water. A sizzling sound. A strong smell. I held my breath, waiting without knowing for what, overwhelmed by both excitement and fear.

Each time she did this the melted lead would assume a different shape. Grandma would study its form in silence, her face pure concentration.

I was scaring what exactly? The water? The molten metal? Some- one’s destiny? Or an invisible djinni hopping and dancing around us in the room? Grandma did not care to answer. Then, a bit later, seeing my puzzled face, she called me.

I sat on her lap, inhaling the scent of rose water, crushed cinnamon and toasted sesame that emanated from her clothes. Cautiously, I squinted into the bowl, just as I had seen her do a hundred times. I tried to get a good view of the mysteries bubbling and swirling in there. I saw nothing.

I had started school that same autumn, and although I already knew how to read, it soon became obvious that writing would be   a massive challenge. There was a problem: I was left-handed. Our teacher had told me—in front of all the other children—that if I wanted to get a red velvet ribbon like everyone else, I’d better send my left hand into exile. I had never heard that word before, “exile.” Where was this place? How could I go there? And, more important, how was I to send a part of me into exile while keeping the remaining part here? Little did I know that it was possible to be torn, to be fragmented, to be divided like that, and to become an insider-outsider, to feel like a stranger in your own motherland.

At the time all of that was unknown to me. Sending my left hand into exile meant keeping it under the desk all day long, and relying on my right hand for everything—writing, holding a book, putting my hand up. The left hand was reserved for dirty things, the teacher had explained. Since time immemorial, the left hand was for sinners and for sinning.

As a result, I started using my right hand and I ended up hating my own handwriting—a feeling that still continues. I did not want to hold a pencil and whenever I had to do so, I would squeeze it so hard between my fingers that it would break into two. What a strange feeling it was having so many things to say but being unable to put them into writing.

So now, as I pointed at the bowl, I made sure to do so with my right hand. “Grandma, what do those holes mean?”

“Those”—she paused, her sea-green eyes lighting up—“Those holes mean if you don’t eat your vegetables, and keep rejecting my stewed okra, there’s no way you can grow up!”

We were very close, my Grandma and I.

I was born in Strasbourg, France, though both my parents are Turkish. My father, a dedicated academic, was completing his PhD at a French university. My mother, however, had dropped out of university and followed him, thinking love would be enough. But the marriage would not last long and a few years later my mother and I would take a one-way train to Turkey.

“I remember sitting by the window, looking outside at the turbulent world where my mother was studying, working, struggling to find her way and her freedom.”

One morning we arrived at Grandma’s house in Ankara. Only later would I come to understand this was a very conservative, patriarchal, middle-class Muslim neighborhood.

Having made the terrible mistake of getting married at the tender age of 19, my mother had now become a young divorcée. She had no diploma, no money, no career. Immediately our prying neighbors began looking around for a suitable husband for her. But my Grandma intervened. “I believe my daughter should go back  to university,” she said. “She should have a diploma, a career. She should have choices.”

When the same neighbors reminded Grandma that my mother had a toddler to take care of and could therefore not become a student, Grandma said with a shrug, “I’ll raise my grandchild. Meanwhile my daughter is free to do as she pleases. She’s young. She can build her life anew.”

Thus, my mother went back to university to finish her degree and then to build a career.

As for me, I was raised by Grandma, whom I sometimes called “Annemim” (my Mama-ma). And my own mother I usually called “Abla” (big sister). The logic behind this labelling was a bit confusing to everyone else, but somehow crystal clear to me.

Every morning after breakfast Grandma would prepare a cup of bitter coffee for herself and a glass of honeyed milk for me. When she finished her drink, she would turn the cup upside down, wait until it cooled and then peer inside. She didn’t watch the news, she didn’t read the newspapers; she read coffee grounds instead.

Around midday neighbors and strangers would knock on our door, asking for help. They would all be served tea, a constant tinkling of silver spoons against glass echoing in the house. People with skin diseases, mood disorders, chronic fatigue or depression were among Grandma’s regular visitors.

For she was a healer, my Grandma. There were things she could do, and things she couldn’t. She was a healer specialized in certain fields. Should anyone try to make a payment or offer a gift, she would refuse it firmly. When I asked her about this, she said you were given knowledge so that you could pass it on to others. How could you demand money for something you did not own in the first place?

I remember sitting by the window, looking outside at the turbulent world where my mother was studying, working, struggling to find her way and her freedom. I would worry endlessly about the bombs and the conflicts and the violence. Meanwhile, another part of me would listen to the murmurs in the house, my Grandma’s soothing voice. How could these opposite forces inhabit the same world—my world, that is? The political and the surreal, the public and the deeply personal, my mother’s resistance and my grandmother’s acceptance . . .

On Sunday mornings, the only days I would see them spend free time together, they would place large, round trays on the table and start making dolma, stuffing spoonfuls of rice and meat and wild herbs inside little green peppers. They didn’t talk much, their movements deft and practiced. But their silence was a peaceful one. A harmonious one. A mutual recognition of their different personalities, a sisterhood of sorts. I would prick my ears trying to catch what went unsaid, and open my eyes trying to observe what remained invisible, obsessed with solving the puzzle that they were to me. I was certain they were full of secrets, these two women. What exactly were they hiding from me?

And when the dolmas were ready my Grandma would say, playfully, “Stop watching us as if we were TV. Whatever you see in us is present in you. One day, you’ll know. But now, come and eat, sweetheart. Come and eat.”

The preceding is from the Freeman’s channel at Literary Hub, which features excerpts from the print editions of Freeman’s, along with supplementary writing from contributors past, present and future. The latest issue of Freeman’s, a special edition gathered around the theme of power, featuring work by Margaret Atwood, Elif Shafak, Eula Biss, Aleksandar Hemon and Aminatta Forna, among others, is published October 17th.

Elif Shafak is an award-winning British-Turkish novelist and the most widely read female author in Turkey. She has published seventeen books, eleven of which are novels. Her work has been translated into 50 languages. Her latest novel 10 Minutes 38 Seconds in this Strange World was shortlisted for the Booker Prize and RSL Ondaatje Prize, and selected as Blackwell’s Book of the Year. Her previous novel, The Forty Rules of Love was chosen by BBC among 100 Novels that Shaped Our World. Shafak is an honorary fellow at St Anne's College, Oxford University. 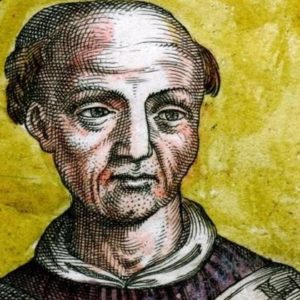 Worst Pope of All Time? ". . this monster without one single virtue to atone for his many vices." –The verdict of the bishops convened...
© LitHub
Back to top
Loading Comments...