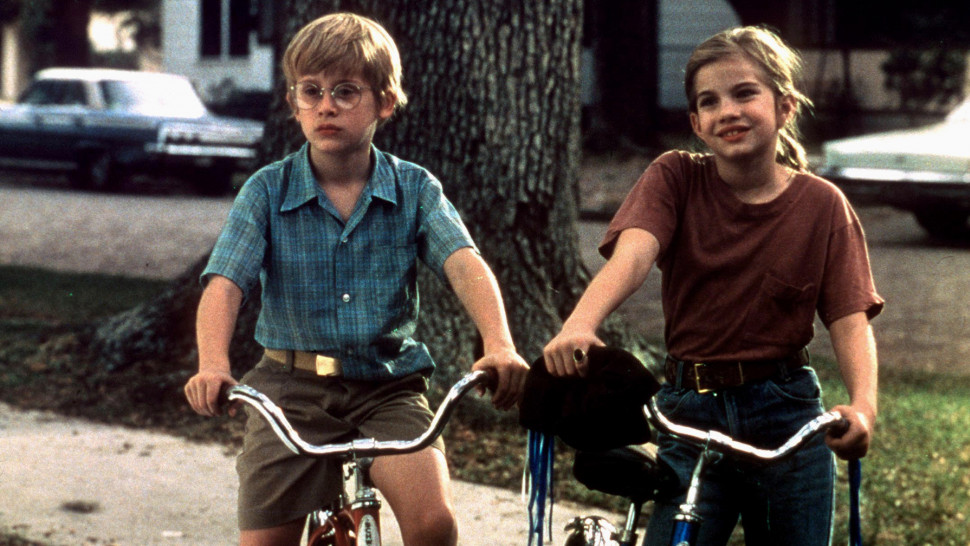 Tree Abraham Remembers a Childhood Spent on a Bike

I had longings for a childhood like Vada Sultenfuss’s in My Girl. I longed to ride down Main Street through back alleys under tree-lined sidewalks to the dock beneath the willow, side by side with a best friend turned boyfriend. Small-town America was always presented as an idyllic playground for latchkey kids to romp around unsupervised.

My suburbia lacked the charm and amenities of a quaint historic film locale. The neighborhood was sun-bleached from saplings in lieu of the forests cleared to build it; services were packaged in box-store oases surrounded by parking lot deserts; and whatever utopic delusions once lulled parents into negligence had been obliterated in the wake of missing kids on milk cartons and sensationalist news coverage of guns, drugs, and peanut allergies.

Self-referential encoding—the mentation that marries our environment with our identity—is made possible through entering default network mode, wherein the body is on autopilot and the brain is at wakeful rest, lost in daydream and wander. I enter this mode most often when cycling. The bike becomes a telekinetic apparatus, effortlessly channeling creative epiphanies from the world into my mind.

The farthest I ever habitually veered from home as a child was on bike rides with my father. Dad towed my sisters in a bike trailer and I followed on my two-wheeler. I tried to retrace our standard route on a map of Hunt Club—the network of suburban streets and parks in the south end of Ottawa, Ontario, Canada, that was encircled by linked pathways. We rode by my elementary school, which was visible from my house, onward past familiar backyards of school friends toward Greenboro Park. I went to a Catholic school. My best friend, who also lived on my street, went to the public elementary and secondary schools farther on.

The only time I saw those schools was on this bike ride. It helped me visualize the setting of her stories. Her schools had the same initials: R.B. One named after a female astronaut and the other after a painter. At the park, we would do all the same things we could have done at the parks by my house, only it felt special because we were somewhere else—two miles away (a twelve-minute ride for an adult). We played on the play structure, which was different, because each play structure is always slightly different enough to excite a child. We were spun on the tire swing. We attempted baseball, Frisbee, football, or soccer. There was a patch under a tree where four-leaf clovers could be found (I was a wanter of wishes—ladybugs and eyelashes on fingertips, shooting stars, birthday candles, and pennies heads up). There were sprinklers to run through on hot days. Maybe if we were lucky, on the way home we would stop at the Quickie convenience store for a Freezie. Maybe.

Greenboro Community Centre was where my Brownies (“Girl Scouts” in America) chapter met once a week. In our groups (I was a Nymph), we paid our dues (25 cents) and then . . . made friends? Learned something? Fashioned pizza ovens out of tinfoil . . . mastered knot tying with licorice laces . . . those are my only lasting takeaways. My parents didn’t keep us long enough in any one organized activity to reap the benefits of fellowship and praxis. I don’t believe I ever earned a badge. I tried embroidering my own. 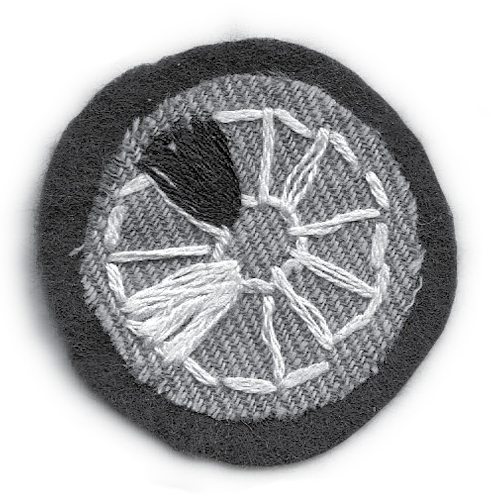 This one resembles the actual Cycling Merit Badge. To earn it, Scouting for Girls: The Original 1920 Girl Scout Handbook states one must:

1. Own a bicycle, and care for it, cleaning, oiling, and making minor repairs, readjusting chain, bars and seat.

3. Demonstrate the use of a road map.

4. Demonstrate leading another bicycle while riding.

5. Know the laws of the road, right of way, lighting and so forth.

6. Make satisfactory report to Captain of a bicycle Scouting expedition as to the condition of a road with camping site for an overnight hike.

7. Pledge the bicycle to the government in time of need.

I am far from achieving any of these requirements. But the symbol reminds me of Buddhism’s Noble Eightfold Path, which I think I am more likely to achieve in my lifetime. 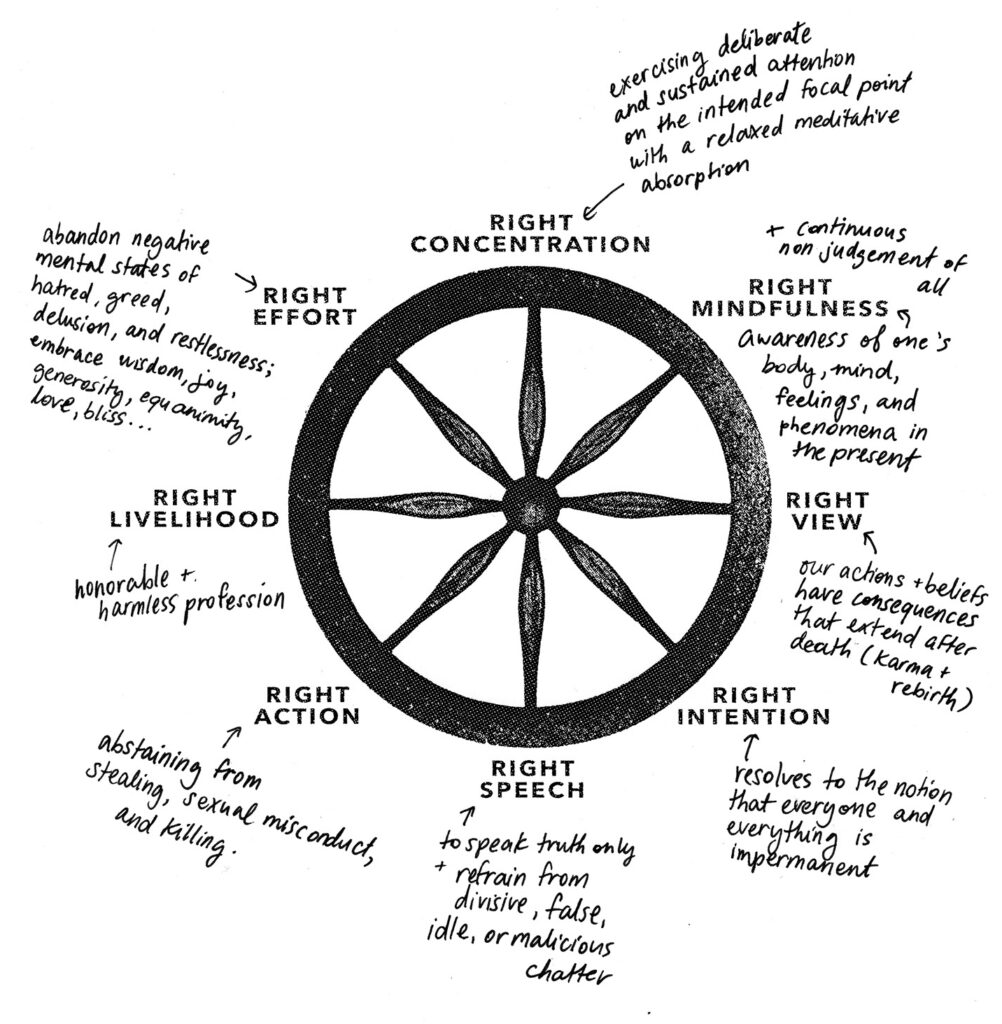 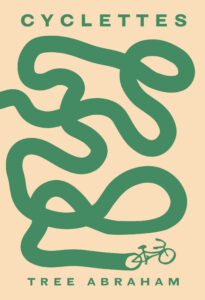 From Cyclettes by Tree Abraham. Copyright © 2022. Used with permission of Unnamed Press.

Tree Abraham is a book designer for publishers in Canada (where she’s from), the UK (where she studied), and the US (where she lives). She is currently a senior designer at Bloomsbury in New York. Her best ideas come while swimming or reading the dictionary. When not designing, she can be found traveling to unmarked places, digging in dirt, and writing unsolicited manuscripts. 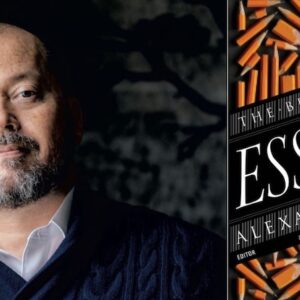 Before settling into a role once held by Gay Talese and Susan Sontag, by half a dozen Pulitzer Prize-winners and a succession...
© LitHub
Back to top
Loading Comments...