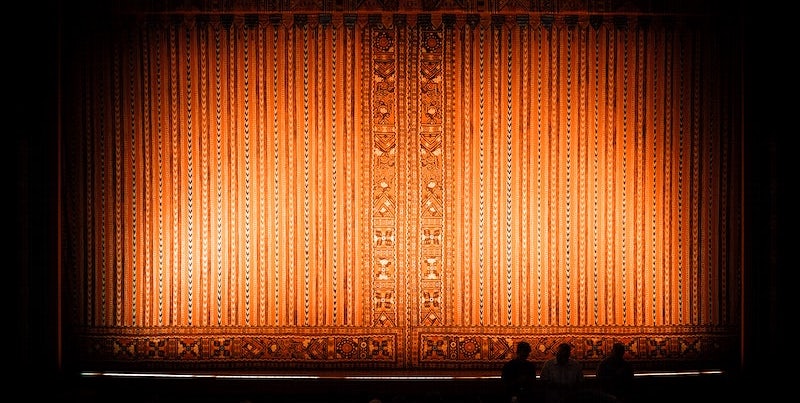 “The effects are created by means of claustrophobia:
you can’t get out.”

The following is excerpted from Isherwood on Writing and first appeared in Lit Hub’s The Craft of Writing newsletter—sign up here.

The thing that I learned from working in what one might call the professional theater—the theater of the good playwright, of the craftsman, as opposed to the theater of the expressionist, of the poet—was that the thing that matters supremely is not plot or situation, but it is character. The great vice of the professional (one might almost say the representational) theater is neatness: the danger that you tie up the whole thing too neatly, that it adds up like a sum and is balanced, and there’s something about it, a kind of coldness and artificiality in consequence. What rescues this is character. If you can put a character on stage, if the character having been put on stage is marvelously acted also, then you have something which takes a great deal of destroying.

Once an audience is really interested in the character, the audience will forget about the weaknesses of the structure of the play. I noticed this very much in the case of this play of ours that what really mattered was Julie Harris. In London the part was played with equal brilliance in another manner by Miss Dorothy Tutin, and it also ran a long while. I noticed very much that as long as Julie Harris was on the stage, the audience was happy, and that this was, in itself, satisfactory.

Now I’ve deliberately sketched over the merely historical account of my relations with the theater before going back to the question of theory, and the question of approach, which is what I really want to discuss here. The theater is a box, a place of imprisonment in which the audience is shut up with the actors. The effects are created by means of claustrophobia: you can’t get out. Of course, you can get out, and if you do you break the spell, not only for yourself but, if enough of you go out, for everybody in the place.

But this simple fact of imprisonment in a box applies to all kinds of theatrical representation, including such a thing as this lecture. I’m really here, and you are really there, and we are all inside this building, and this lecture is a means by which we all get out of it. That’s to say, if I can navigate it to the end, then the doors will open and we can all be released. Similarly, a play is a way in which one is allowed to leave the theater at the end. This is the fundamental difference between the play and the cinema: the cinema being not a box, and not claustrophobic, but a window through which you look outside. The frontal human drama of really having live actors on the stage is something in which the cinema does not and cannot attempt to deal.

I think that a certain irresponsibility in the theater is very exciting and desirable.

When Auden and I became interested in writing for the theater, we had very much criticized the conventional play of that time because we said that there the actors were unnecessarily divided from the audience. In our 1930-ish way, we equated this with the undesirable separation of the private life from the life of the common good, and we equated the audience as it were with the great mass of society, and the actors with the people of the ivory tower. However much nonsense this may have been, the fact remains you could make such remarks in 1930 without the audience throwing anything at you. It was taken as being probably true, or at least worth discussion.

So we said what we want to do is to liberate the actors from the confinement of the stage, and hence we were very much in favor of all those devices which, goodness knows, even in those days were not at all new: the device of having people get up in the audience and yell out, the device of having people rush down runways to and from the stage, the device of having no scenery but maybe showing the bare back of the theater or a cyclorama on which lights are thrown. In other words, to exchange the atmosphere of conventional theater for that which much more resembled a kind of animated political meeting.

Now of course in saying all this we were really not changing the fundamental fact at all. If you break down the barriers between the stage and the audience, you are heightening the sense of claustrophobia, increasing the involvement of everybody inside the box with each other, and so in that sense not being at all revolutionary. When we first came to New York, we were taken by our publishers to see a performance of a review which we immediately realized was the great masterpiece in our sort of playwriting—a reaction which shocked the publishers very much, because the review was dreadfully uncultural and was called Hellzapoppin’ with Olsen and Johnson.

Olsen and Johnson produced the sense of claustrophobia, the confinement in a box, to the greatest conceivable extent by means of sound effects and tarantulas that were supposed to be passing under our seats. At one notable moment in the performance a very large gorilla seized a girl out of the audience and began climbing up the side of the boxes—either Olsen or Johnson or both drew automatic pistols and fired repeatedly at the gorilla, but missed. Finally, Olsen remarked, “Well, I daresay they’ll be very happy,” as the gorilla with the girl over his shoulder disappeared through the entrance to one of the boxes. So this was in fact the sort of theater that we were interested in at the time we were working together.

There is another thing that one learns from being in the theater, and particularly from being in the theater of poetry, the theater of expressionism, and that is the enormous importance of speech, of sound, of what is said. This again is a fundamental difference between the theater and the films, in my opinion. In the theater, you can dominate by sound, by speech, just as on the film you dominate by image and movement. In the theater you can remain perfectly still and deliver speeches which cover four or five pages, and, if you know your business as an actor, and if the speech is of real quality, people will listen to you. I always imagined that if you said more than two or three lines and didn’t switch to another character, people would leave the building. Not a bit of it.

Now just as the characteristic danger in the professional theater is neatness, a too cut-and-dried, too mechanical plot, so the great danger in the theater of poetry and expressionism is double-talk. We have seen a great deal of that nowadays among dramatists, many of them French, who have played such a large role in the life of our theater during the last ten years. You all know those tremendous utterances by one of the characters which sound pretty good, but you spend the rest of the night wondering what it meant. I was trying to parody such an utterance the other day and thought of this: a character says, “No, Prince, ’tis not the birds that fear the sea, it’s the sea that fears the birds.”

This kind of line is absolutely usual and is accepted in good part by the audience and is thought to be necessary to the sense of mysteriousness which such a play endeavors to create. Auden and I were of course also guilty of double-talk in this respect from time to time. We were often accused, and I have thought about this very often since, of not taking the theater seriously. I think this was both good and bad insofar as it was true. I think that a certain irresponsibility in the theater is very exciting and desirable. The only trouble is that one is so apt to get carried away by it.

But there is no doubt that we did exhibit an enormous amount of irresponsibility, and even a certain faint sadism toward the audience as much as to say I wonder if they’ll stand for that. Without the least reason to say this, without the advantage of knowing Samuel Beckett, I have often felt that he is working toward such effects in another way. Beckett’s provocation in a play like Waiting for Godot (1953) is extraordinary. Remembering that the whole point of the play is that the people are in the theater and cannot leave until they have been dismissed by the working out of the play itself, remembering this, think of Beckett’s extraordinary use of pauses. Think how he brings the whole action on the stage to an absolute standstill, and with incredible daring confronts the two characters. There are places in Godot where such remarks are made as “Well, say something.”

And the other looks and says, “I’ve got nothing to say.”

And the first one says, “Neither have I.”

And then there follows a pause which is technically of enormous interest. When I first saw Godot, I hadn’t read it, and I really wondered if somebody wasn’t going to scream or rush out of the theater. And yet one saw that this use of pauses was deliberate, exceedingly effective, and that it created a certain psychological situation which corresponds absolutely with situations in our daily lives, and that the play seems full of meaning and relevance, and was in fact very moving. 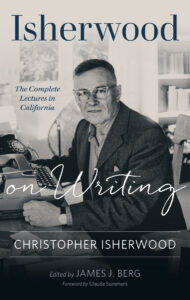 A major figure in 20th-century fiction and the gay rights movement, Christopher Isherwood (1904–1986) wrote many books, including A Single Man and Down There on a Visit. 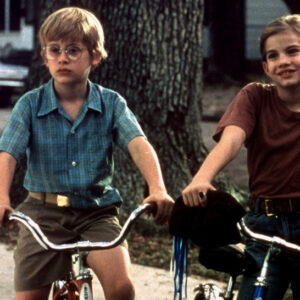 I had longings for a childhood like Vada Sultenfuss’s in My Girl. I longed to ride down Main Street through back alleys...
© LitHub
Back to top
Loading Comments...