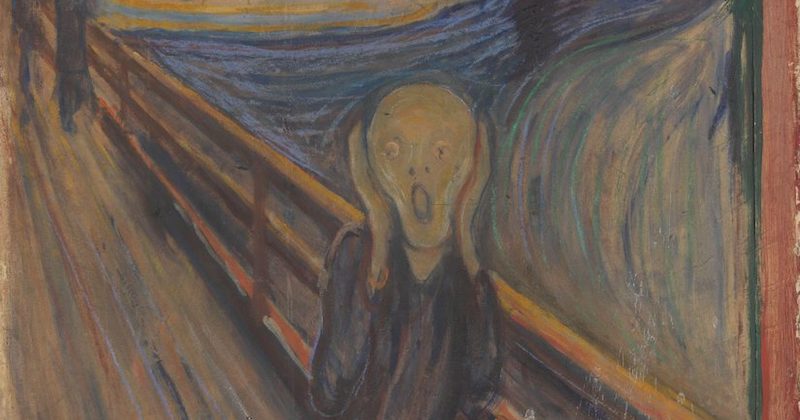 Edvard Munch taking criticism badly is all of us.

If you’ve ever gotten a bad critique in workshop and thought about it for, well, years, you’re in good company: the company of The Scream artist Edvard Munch. We’ve known for a while that a pencil inscription at the top left-hand corner of the painting reads, “Can only have been painted by a madman.” Rude! But, as Artnet News reported the other day, that comment was in fact written by . . . Edvard Munch.

The inscription was added years after Munch finished the painting, so many believed it was the work of someone else, and possibly an act of vandalism. Said Mai Britt Guleng, curator at the National Museum of Norway (where The Scream will be exhibited in 2022), “This inscription is not an explanation about the motif . . . this is a comment about the painter’s mental health, something an art critic would never expect an artist to make himself.”

But, using handwriting analysis and infrared technology to compare the writing with Munch’s handwriting samples, experts have arrived at the conclusion that Munch actually did write it himself. Art historians now believe Munch wrote the inscription in response to critiques the painting received when it was exhibited for the first time in 1895; critics who were unsettled by the work made public assumptions about Munch’s mental state, essentially saying he was insane—even at a discussion where Munch was in attendance.

Munch’s notes and letters reveal a preoccupation with this critique, which likely led to him scrawling the inscription on the painting as a way to take back his power. Said Guleng, “[Munch] wanted to provoke but he also wanted to be respected. It was important for him to take control of the story about Munch both to himself and to the public . . . it is both a sore and sarcastic comment.” Sore and sarcastic, but understandable; it’s the old-school equivalent of tweeting about a bad review of your book or a critique you disagree with, an attempt to telegraph “I know what you’re all saying about me . . . and I’m ABOVE IT!” And subtweets, however embarrassing, are cathartic. But if you choose to do it, just keep in mind that in a century, you might be studied by some expert Norwegians.