Edmund White on Stonewall, the ‘Decisive Uprising’ of Gay Liberation

At What Point Does Resistance Become the Only Choice?

Via Penguin Classics
By Edmund White

There’s something wonky and inappropriate about nearly every major protest event in history. The British inspired the Boston Tea Party because they wanted tax revenues to pay for battles they’d fought on behalf of their American colonies. When the French revolutionaries destroyed the Bastille, there were only seven prisoners in it, most of them aristocrats who came with pets, their own furniture, and hundreds of books. The Stonewall uprising protested a police raid on a Mafia-owned gay bar and dance spot that had no running water, where glasses were “washed” in filthy suds and reused, and which was “protected” by straight, extortionate Mafia goons.

But each of these uprisings came along at the right historical moment. Americans were fed up with taxation without representation. The French were protesting rising national debt, extremes in wealth and poverty, expensive foreign wars, and an autocratic government. And gays, who’d almost never resisted arrest, stood up for themselves at last.

There were many causes of this historic resistance. Throughout the early 1960s the city had shut down gay bars out of deference to tourists visiting the World’s Fair, which was mainly designed to showcase American business; the power behind it was the Tammany Hall mayor Robert Wagner. But at the time of Stonewall, in that pre-internet age that was the main place for queers to meet, it seemed gay and lesbian bars were being left in peace. Everyone assumed Mayor John Lindsay was a nice guy because he looked like Kennedy.

The clientele of the Stonewall had gradually changed from white to black and Hispanic, kids who were used to fighting the cops. And then it was very hot outside. And Judy Garland, the Pasionara of gay men, had died on June 22, 1969, from a Seconal overdose at age forty-seven and lay in state in Manhattan’s Frank E. Campbell funeral home. The Stonewall riots began June 28 at three in the morning. They went on for three days and at times the whole of Sheridan Square was cordoned off. Most important, the sexual revolution, Black Power, and anti-Vietnam War demonstrations had shown the efficacy of protest.

The United States had gradually shifted from espousing a morality of duty to a newfound yen for self-fulfillment. Gone or going were the days of sacrificing one’s own pleasure for the sake of conventional values; typical of the 1960s were “alternative” publications such as Screw and Hustler, which urged their readers to indulge their secret desires. The Kinsey Reports had already reassured people, straight and gay, how many adults had at least experimented with non-procreative sex—even kinky sex! Black Power had replaced the class analysis of the left with the race analysis of the civil rights movement. War protesters in the days of the universal obligatory male draft had inspired the majority to oppose a war we apparently couldn’t win, that didn’t serve our national interests, and that had become the “killing fields” of thousands of soldiers. And we were seeing how effective those protests could be. The burgeoning women’s movement was showing that “sisterhood is powerful,” a preview of coming attractions in our American dialogue. Women prisoners locked up in the Jefferson Market prison (since razed) were shouting down their encouragement to the Stonewall protesters resisting the police.

Many if not most historians would argue that major events such as gay liberation are not sudden but gradual, incremental; as someone who lived through Stonewall I would claim that the uprising was decisive. Although there were small gay-rights groups such as the Mattachine Society (which first met under the name of Society of Fools—mattacino is the Italian word for a masked harlequin), most gay people (including this one) had hardly heard of them. Before Stonewall the prevailing theories of homosexuality—even among queers—were that we were sinners, criminals, or mentally ill. There was a certain moment at a gay cocktail party in the 1950s, for instance, when we would all put down our martinis and sigh, “Gosh, we’re sick!”

I spent some twenty years on the couch trying to go straight and was assured by my various shrinks that homosexuality was just a symptom of a deeper disorder (oppressive mother–absent father was a favorite, or being arrested in the “anal-aggressive stage”). Almost no one could see queerness as something along the normal spectrum of human (or animal) behavior. The Mormons were making deviant boys look at homoerotica and then submitting them to shock therapy. Priests were listening to tearful confessions before “consoling” their little sinners. Many Protestant sects were sending their homosexual minors to boot camp for “conversion therapy.” Three states still ban all forms of sodomy (including oral and anal sex), even among heterosexuals; a 2003 Supreme Court decision decriminalized homosexuality even among consenting adults in fourteen states.

The Stonewall uprising changed attitudes, first among lesbian and gay people. In January 1970 I moved to Rome for six months, and when I came back cavernous gay dance clubs, complete with go-go boys in white towels under black light, had suddenly sprung up.

The Gay Academic Union started in 1973 and lasted four years. Gay political groups formed. Pride marches were held in scores of cities on the anniversary of Stonewall (as I write, we’re approaching the fiftieth anniversary). Same-sex civil unions and then marriages were legalized. Openly lesbian and gay volunteers were accepted into the armed forces. In many places discrimination against lesbians and gays in the workplace and in housing became illegal.

These rights are precious and were hard-won by generations of activists. But the change in attitudes is parallel and nearly as important. I was engaged twice, hurt my fiancées, doubted all my impulses, feared a bitter and lonely old age (predicted on every side). Even today well-meaning heterosexuals lament that I’m considered a “gay author.” (Would they be equally shocked by a Jewish or African American writer? Oh, no, sorry. Philip Roth and Toni Morrison are “universal” authors.) When I was a kid I knew very few gay couples, and no one would have sided with queers who wanted to adopt. When I worked for Time-Life from 1962 to 1970, I had to refer to my boyfriends as women; otherwise I would have been fired. My dad fired an employee because he was unmarried at thirty and wore cologne.

I suppose the horror stories bore everyone. I just want to finish with one observation: Because of the Stonewall uprising, people saw homosexuals no longer as criminals or sinners or mentally ill, but as something like members of a minority group. It was an oceanic change in thinking. 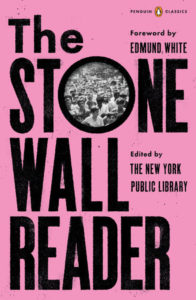 From The Stonewall Reader edited by the New York Public Library, published by Penguin Books, an imprint of Penguin Publishing Group, a division of Penguin Random House, LLC. Foreword copyright © 2019 by Edmund White

On the Literary Pitfalls of Writing About the Young and Rich

The 16 Best Book Covers of April 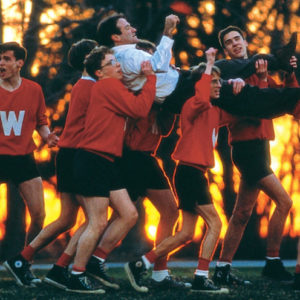 On the Literary Pitfalls of Writing About the Young and Rich A confession: I did not go to boarding school. I have, however, long been intrigued by the boarding school novel as a kind...
© LitHub
Back to top
Loading Comments...