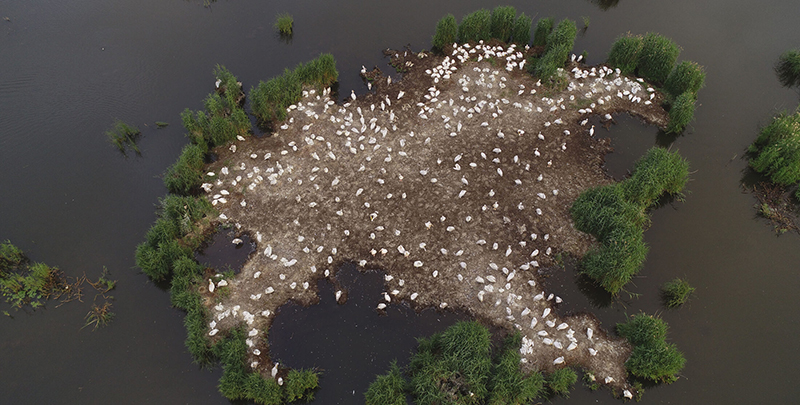 Ecosystem in Decline: Finding the Spirit of the Dalmatian Wetlands

This Week from the Emergence Magazine Podcast

Emergence Magazine is an online publication with annual print edition exploring the threads connecting ecology, culture, and spirituality. As we experience the desecration of our lands and waters, the extinguishing of species, and a loss of sacred connection to the Earth, we look to emerging stories. Our podcast features exclusive interviews, narrated essays, stories and more.

From the shores of the Prespa lakes in northern Greece, Julian Hoffman witnesses the drastic decline of Dalmatian pelicans as they succumb to the recent outbreak of avian influenza. As the wetlands fall strangely quiet, he senses the porous boundaries between our health and that of the ecologies we inhabit.

THE ISLANDS are mantled with dead pelicans, like a late fall of snow. In the low light of a March afternoon, I’m standing on a small hill that commands clear views of the wetland and its dense reedbeds. By now, the great surging clamor of the world’s largest colony of rare Dalmatian pelicans should be in full swing: birds continually lifting from the lake waters or lowering on vast wings through the thin mountain air to jostle for space on the increasingly crowded isles. Instead, the dark water is whitened by a mass of floating carcasses. And the islands of detached reedbed on which some 1,400 pairs of this remarkable species typically breed are saddled with slack birds. They seem strangely flat from a distance, as though life has been pressed out of them by a great, immovable weight.

When the first dead Dalmatian pelicans were discovered on Lesser Prespa Lake in northern Greece, they numbered only 11. A large enough figure to take note of but not be unduly alarmed by, given that deaths from natural causes are a common fact of life in busy wetland breeding colonies. That was February 17, 2022. A week later, mortalities had reached 209. By then, tissue samples gathered from the original pelican carcasses had revealed the cause of death as H5N1, or highly pathogenic avian influenza (HPAI). On March 9, just three weeks after the first deaths had been recorded, the figure had rocketed to 1,003. Witnessing the terrible trajectory of these numbers, it was hard not to draw parallels with the early days of the Covid-19 crisis, when mortality figures rose with staggering exponentiality. And as with the pandemic, the rising death toll on the Prespa lakes from avian influenza wouldn’t stop there.

Through my telescope I scan the wetland, where movement is largely limited to the more secluded parts of the dispersed colony. Panning from left to right, I eventually land on an islet entirely wrapped in dead birds. But there’s a single living Dalmatian pelican too, starkly alone and standing on the curving white summit of its deceased kin. Up close through the lens, I linger on its tousled head feathers and the sword-like beak, whose pouch has turned strikingly brick-red for the breeding season; I see how its eyes are the color of old ice. Several minutes later, I realize that I’m still focused on this one pelican, motionless on its mount.

I’m not sure why it’s absorbing so much of my attention except that in standing alone it has become more symbolic, emblematic of wild resilience or fragility. Or perhaps I’m subconsciously projecting onto it the role of witness to the devastation. But then it hits me with sudden force why I’m so fixed on this particular bird—it’s because in all likelihood it’s already been condemned to join those beneath it in a heap. Without a radical change in circumstances, it’s unlikely this bird will survive the coming days, because the persistently cold temperatures and scant light of late winter this year have conspired to make conditions ideal for the transmission of avian influenza. By staying true to a lake that’s encoded as home in its tissues and bones, it’s almost certainly doomed to die. And it’s heartbreaking to be privy to such grim inevitability.

FOR MORE THAN two decades now I’ve lived alongside the pelicans of the Prespa lakes in northern Greece. These birds are—for so many, residents and visitors alike—simply an astonishing and seamless part of being here. There is no Prespa without pelicans. In summer, the skies brighten with their flights, as hundreds of birds, their wingspans as great as three and a half meters when fully extended, catch warm thermals generated by the earth, tracing rising circles into the endless blue above.

Or they’ll skim so close to the lake that they’re doubled as if in a mirror, held there by a phenomenon known as ground effect, when an invisible cushion is created by air flowing into the space between a bird’s wings and the surface of the water. Even when you know the science behind what holds them in place, the sheer poetry of the motion feels like they’re suspended solely by a spell.

But pelicans weren’t always considered so convivial and wondrous a neighbor here. There was a time when the Greek government offered a bounty on them—50 drachmas for a dead bird and 5 for an egg—in the mistaken belief that pelicans competed directly with fishermen for the same quarry. The fishermen of Prespa, living a long way from the nearest municipal offices where they could easily deliver their proof, often just broke up the nests and smashed the eggs and any young birds instead.

But the fortunes of the Dalmatian and great white pelicans of Prespa began to slowly and unexpectedly change in 1971, when Greece’s right-wing junta regime, which had claimed power in a coup in 1967, granted the region protected status as a nature reserve precisely because of the significance of its waterbird colonies. The declaration was, in part, an attempt by the military dictatorship to gain credibility with European governments by casting themselves in a favorable light at a time when the regime’s horrific human rights abuses justly garnered most of the international attention, but primarily it was a testament to the formidable resolve and persuasion of the Swiss conservationist Luc Hoffmann.

Hoffmann was drawn to the Prespa lakes when French biologists in the late 1960s finally identified the remote basin as the home of pelican colonies long speculated about by European scientists. By then, Hoffmann, a founding member of the World Wildlife Fund and the Ramsar Convention on Wetlands, had already begun making a positive impact on international wetland preservation, using his ornithological training and considerable wealth to help protect places of significant biodiversity by encouraging local conservation initiatives through a mixture of scientific study, community involvement, and awareness-raising. It was these efforts of his and fellow conservationists that led not only to the declaration of Prespa as a protected area, a status that was upgraded to the level of national park in 1974, but to the eventual founding of the Society for the Protection of Prespa (SPP) in 1991, a nonprofit environmental organization dedicated to the preservation of the lakes’ natural and cultural wealth.

The Prespa lakes, shared by Greece, Albania, and North Macedonia, are among Europe’s oldest bodies of water, dating back some 3 to 5 million years. Given their antiquity, it only seems right that these lakes should be a haven for pelicans, one of the most ancient families of birds still in existence on the planet. Fossil finds in France have shown that the skeletal structure of pelicans has remained virtually unchanged over the past 30 million years of evolutionary adaptation, explaining why the eight modern pelican species scattered across the globe today share the same fundamental morphology as that of their earliest ancestor.

And for those who visit the colonies, seeing these birds soaring on wings so large that they eclipse the sun when passing in front of it, their bayonet bills strangely archaic for such elegant fliers, a deep-time association often surfaces swiftly. It’s like watching dinosaurs, you’ll hear them say by the water, their eyes turned upwards, lost in the slow passage of these immense and extraordinary beings.

Encountering the colonies for the first time in the late 1960s, those visiting French biologists estimated that there were about 100 pairs of both Dalmatian and great white pelicans nesting here, restricted to just two isolated corners of Lesser Prespa Lake: an inner lagoon within dense reedbeds in Greece and an area of reeds in the lake’s border zone between Greece and Albania. While the great white pelican’s occurrence in Europe is noteworthy, it’s a species that’s found in such large numbers in Africa and Asia that it’s considered to be of “least concern” in conservation terms by the International Union for Conservation of Nature (IUCN).

The Dalmatian pelican, however, is far rarer. While its colonies can be found from Southeastern Europe right across Central Asia to Mongolia and Eastern China, the Dalmatian pelican’s need for extensive, undisturbed wetlands means that its presence is largely scattered and scarce—especially since the cumulative pressures of habitat loss and persecution in the eighteenth and nineteenth centuries drastically reduced its global numbers—making this remote community of birds all the more significant. This pair of ancient Balkan lakes, formed when movements in the Earth’s crust created a place for water to swell, hold something of rare and incalculable value.

Julian Hoffman is the author of The Small Heart of Things, winner of the AWP Award Series for Creative Nonfiction, and Irreplaceable: The Fight to Save Our Wild Places, a Highly Commended Finalist for the 2020 Wainwright Prize for Writing on Global Conservation. His writing has appeared in Lush Times, EarthLines, Kyoto Journal, The Redwood Coast Review, and Southern Humanities Review. He lives in a mountain village beside the Prespa lakes in northwestern Greece.

Why Can’t America Escape Its Racist Past?

Lessons on Community From a Father Reading Dostoyevsky 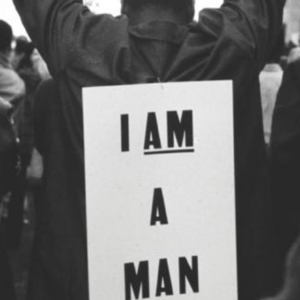 Why Can’t America Escape Its Racist Past?