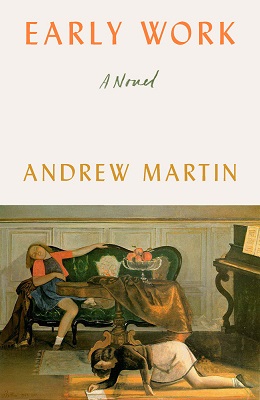 The following is from Andrew Martin's novel, Early Work. As Peter Cunningham looks for inspiration for his novel in the "foul rag and bone shop of the heart," he strikes up a charged friendship with Leslie, a writer and sexual adventurer. Andrew Martin's writing has appeared in The Paris Review, The New Yorker, and The New York Review of Books, and elsewhere. Early Work is his first novel.

When Leslie was twenty-five, she lived in New York and, for longer than she should have, dated Todd. Todd was a playwright and actor who held down a day job at an investment firm, the one that prided itself on hiring artistic types for their ability to “think outside the box.” Maybe unsurprisingly, given the amount of work he was expected to do, Todd was deeply reliant on Adderall, and, in the quantities he took it, combined with never eating and also drinking a great deal, he became, not infrequently, an insane person. He wasn’t terrifically pleasant to begin with—that wasn’t the attraction, exactly—but by the end of a week in which he’d worked five ten-hour days at the office and then stayed up most of the nights writing and snorting speed, he was demonic, insisting he was imbued with powers greater than those of “lazy, weak-minded hipsters.” Never mind, or perhaps take into account, the fact that he was five foot eight and rail thin, a bald, chain-smoking skeleton.

His play about “the shadow cabinet” of George W. Bush, in which the torture victims of history (early Christian martyrs, Armenians, Cambodians) assemble in the Situation Room to approve war crimes, was kind of funny, mostly disturbing. Todd himself played the president, though he spoke in his own voice and didn’t wear a suit, instead sporting a white undershirt with “prezident” scrawled across it in Sharpie. Leslie attended a weekend’s worth of performances of this play only a month after meeting him, and even though the show was pretty awful, she saw the potential, or was at least willing to see where things went. It became clear to her that first weekend that he and his female producer Katie were also sleeping together, but it didn’t overly bother her. She knew from a brief college career acting in an anything-goes Shakespeare troupe that theater people were going to do what they wanted, common decency be damned. There was no stopping what happened backstage.

Sex with Todd was a mess. Between the drugs and his anxiety and his selfishness, there wasn’t a lot to work with. He wanted to be “the dominant one,” a preference with which Leslie was happy to comply, though the fact that she was taller, heavier, and stronger than him created something of a sight gag when she mentally removed herself from the scene, which happened frequently during the periods in which she was nominally restrained in some way and he was trying to get an erection by stringing together long sequences of vulgarities and slapping himself in the face. When she was allowed to take control of their sexual activities, ordering him to do this or that, he came almost immediately, which was unfortunately more a source of shame and disappointment to him than pleasure. The only times she got to come were when she “made him” go down on her, which he did reluctantly and badly. And yet, he still turned her on, somehow, at least in principle. When they were apart, she sometimes touched herself thinking about him. The idea of him, not him him.

Him him told her that a short story she’d written was “a really nice first effort” and that she should come back to it once she’d read some of the books he thought she’d find useful. (She had not, at this point, made it very far in Mason & Dixon.) She got drunk for courage and emailed the story anyway to a friend who worked at an important magazine, asking him only to tell her she wasn’t crazy for thinking it wasn’t bad. In response, she got a note from the fiction editor a week later, saying that the story was “brilliantly conceived, if not entirely emotionally coherent,” and that while they couldn’t take it, they’d be interested to see more work in the future. It shook her so deeply that she didn’t write a word of fiction for over a year. She didn’t tell Todd about any of it.

“When they were apart, she sometimes touched herself thinking about him. The idea of him, not him him.”

One night, she and Todd and his producer Katie were out late at a bar near Katie’s apartment in Park Slope, drinking endless whiskeys and taking turns doing Todd’s cocaine in the bathroom. Katie had the open, helplessly expressive face of a Northern Renaissance Madonna, sad and shining with inner knowledge. While Todd was occupied with his drugs, Katie nuzzled her head against Leslie’s shoulder.

“You should stay over my place tonight,” she said. “It’s gonna take you forever to get home from here.”

“Would that be okay?” Leslie said. She hated paying for cars, on principle, and couldn’t really afford them, either. Ride-sharing was still but a glimmer in a young misogynist’s eye.

Katie lifted her head from Leslie’s shoulder and nodded solemnly.

“I want your company,” she said. “’Cause I’m a sad and looonely girl.”

“What happened to what’s-his-name? Charles?”

“Hey, did you and Todd ever, like, date date?” Leslie said.

“Nooooo, no no,” Katie said. “I mean, we have history, certainly. And I love him to death. But I couldn’t deal with that, like, consistently. Not that you shouldn’t.”

They watched him walk across the room, stopping at the bar to order another drink.

“He is charming sometimes,” Leslie said.

Leslie, seized by some combination of relief, despair, and desire, leaned over and bit Katie on the neck, twisting her mouth as she disengaged to leave a mark.

Leslie made a low growling sound, like a dog.

“You be good,” Katie said, petting Leslie’s hair. Leslie was panting and holding her wrists limp like paws when Todd returned to the table.

“One thing you can never have too much of?” Todd said. “Whiskey and cocaine.”

Leslie leaned over the table and licked his face in a long slurp.

“Now that’s the kind of affection I’m looking for,” he said. “Just bypassing cerebral consideration and honing right in on the salt of human skin.”

Leslie gave a demure howl and finished her drink.

From Early Work. Used with permission of Farrar, Straus and Giroux. Copyright © by Andrew Martin.

How to Copy Your Favorite Authors' Best Beach Looks 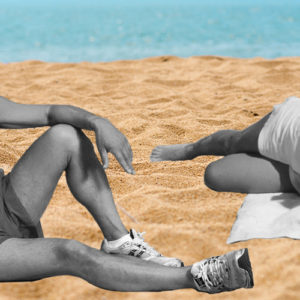 How to Copy Your Favorite Authors' Best Beach Looks Sun, sand, and surf: better than desk, pen, and ink any day. Or at least any day in the summer, when the beach beckons. To get you through...
© LitHub
Back to top