The New York Times dropped jaws with a tea-spilling article detailing an ongoing six-year dispute between a white writer who donated a kidney and a writer of color who wrote a short story inspired by the donation. Dawn Dorland and Sonya Larson now find themselves deep into contentious litigation with no end in sight.

At the heart of their dispute, Dorland says Larson’s story impermissibly incorporated a letter that Dorland had written to her kidney recipient. Dorland’s suit included two claims that seek monetary damages. The first alleged that the incorporation of her letter, which Dorland also shared on Facebook, violated copyright law; the second alleged Larson intentionally caused Dorland emotional distress.

Intentional Infliction of Emotional Distress (IIED) is a civil claim that provides compensation for the intentional infliction, by extreme and outrageous conduct, of severe emotional distress. In these claims, plaintiffs, like Dorland, must prove that the defendant’s conduct “goes beyond all possible bounds of decency, and is regarded as atrocious, and utterly intolerable in a civilized community.”

In textbooks and treatises, modern IIED claims involve the most vile and shocking misbehavior. Police deceiving a mother that her seven-months-old child suffered critical injuries in an automobile accident, so that police could trick her into visiting the hospital, where officers committed her to a mental-health ward. Ford Motor Credit Company convincing a grandmother that her grandchildren were hurt in a serious car accident, so that she’d provide contact information for the children’s father, who was delinquent in his car payments and had evaded debt collectors. A female shoplifter escorted into a backroom where a male employee, threatening to press charges and blocking her escape, compelled her to perform sexual acts on herself.

These examples reflect the shocking behavior required to prove a modern IIED claim. It hasn’t always been that way. Scholars note that IIED lawsuits have historically protected upper-and-middle-class white women against anything that threatened their reputations, wounded their honor, or harmed their dignity.

Who first harnessed instruments of the law to threaten or compel compliance from others? Or, put simply, who first lawyered up and fired a shot across the bow?

Here’s a classic example: a white mother and her children visited a train depot’s segregated waiting room, where a black woman worked as an attendant. One child knocked over a cup, allegedly enraging the attendant. The attendant allegedly accused the child of intentionally knocking over the cup when the child knew the cup contained water. The “very angry” attendant allegedly told the mother, “If you say the child did not know that the water was in the cup you are a liar.” The attendant, “looking angry and vicious,” allegedly continued, “I am used to your kind. I meet up with them every day.” The white woman, who was “not accustomed to be[ing] treated this way by colored people,” allegedly endured such “abuse and ill-treatment” for five minutes. The woman later claimed that “she could not close her eyes without that angry, threatening negro arising before her and murdering [her in her] sleep.”

Today courts would dismiss this claim. I hope. But in 1905 the courts expressed outrage. “What could be more humiliating to a frail, delicate, sensitive woman, with a babe at her breast and her other little ones around her, than to be pounced upon, vilified, and traduced by a negro servant in a railway depot.” An all-white, all-male jury awarded $2,500 in damages, roughly $77,000 today.

One scholar observed that, during the first half of the 20th century, whites regularly availed themselves of IIED claims to reinforce racial segregation and white privilege. Meanwhile, the scholar wrote, “the mantle of respectability that allowed some white women to claim protection against emotional distress was typically denied to women of color.”

One must ask in which category does Dorland’s IIED claim fall. Does the claim reflect the shocking behavior that modern caselaw requires? Or does the claim appeal to a civil system that historically protected white women from people of color who caused the slightest perceived offense. If it helps, the judge dismissed Dorland’s IIED claim, holding, “At worst, Larson took advantage of Dorland’s trust in order to use Dorland’s personal and somewhat intimate story for Larson’s own benefit.”

Dorland reminds everyone that Larson initiated litigation. But “who filed suit first” feels an arbitrary place to identify who threw the first punch in this legal brawl. Law schools teach that litigation should be the last resort. The better question is: Who first harnessed instruments of the law to threaten or compel compliance from others? Or, put simply, who first lawyered up and fired a shot across the bow?

Court records suggest Dorland. Her lawyer wrote the Boston Book Festival to initiate settlement talks. The letter accused Larson and BBF of violating Dorland’s copyright. It demanded that BBF cease and desist any printing, copying, or distribution of Larson’s story. The lawyer ominously warned, “do not test our resolve,” threatening to pursue statutory damages of $150,000. To be clear, a different attorney now represents Dorland.

Strangely, this first shot may have been a bluff. It’s unclear that BBF would’ve had to pay a penny. In copyright claims, a successful plaintiff can choose between two categories of damages. Statutory damages are an often-generous prescribed amount in cases where the financial harm is hard to estimate. Actual damages, on the other hand, are trickier because the copyright owner must prove the dollar amount lost due to infringement.

For actual damages, Dorland might show that she lost profits from the infringement, a challenge considering she posted the letter to Facebook for non-commercial purposes. Dorland’s lawsuit also requests “Larson’s past and future profits.” Who knows how much that might eventually be? Larson’s affidavit states her story has earned, in total, $425.

Further, whether Larson violated copyright law is far from settled. Several experts have explained that Dorland has a tough fight ahead. The judge has ruled that Larson’s defense of fair-use—which grants writers limited rights to incorporate copyrighted materials in select circumstances—should be decided by the jury.

All of which questions Dorland’s lawsuit. Her IIED claim dismissed. Her iffy copyright claim, with iffy potential for damages, in question. Maybe she’ll receive non-monetary relief like an order prohibiting Larson from infringing again. So, given that Dorland has spent thousands on attorneys, one must ask: what does Dawn Dorland want?

Steven Wright teaches law and creative writing at the University of Wisconsin-Madison. His novel, Coyotes of Carthage, is a 2021 nominee for the upcoming Hurston/Wright legacy award for debut fiction. 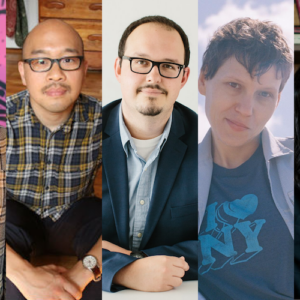