Donald Trump Will Never Understand the Pain He Has Caused

Sometime in the night there’d been rain, a cold front in from the Atlantic. But by morning all that was gone. The clouds thinned into a blue unbroken chain, and the sunrise came on, first in the Washington Monument and then against the Kennedy Center and the Capitol dome; a swift, intermittent dawn that brightened the Potomac with clear winter light.

Since daybreak I’d been standing at the foot of the Navy and Merchant Marine Memorial on the Virginia side of the river. Snowplows blocked the bridges. The National Mall and surrounding streets were closed. 25,000 soldiers patrolled everything. Two weeks earlier, on January 6, a crowd of white supremacists, QAnon conspiracists, militia, misogynist brotherhoods, and other Trump supporters had led an insurrection against Congress—attempting to silence the votes of 81 million Americans with violence—and even though I’d witnessed it firsthand, I still found myself marveling daily at its aftermath.

This morning I was waiting for a helicopter—the President’s—but, as usual, it was late. Even on a day like this, Donald Trump refused to function on time. A half-dozen curious onlookers had also braved the morning chill, including a few cameramen with the local NBC affiliate.

I hopped in place, one eye to the sky and the other glued to CNN, which was playing on the phone in my freezing hand.

At last, the white-topped military helicopter came into view, descending in an arc down behind the low facade of the Executive Office Building, its sea-green nose angled up for the landing.

Mr. and Mrs. Trump departed the White House and climbed on board. She wore dark sunglasses and carried in her arms a $70,000 crocodile-skin handbag. He touched a palm to his belly, his elaborate combover made precarious by the wind. “It will take them to Joint Base Andrews,” Jake Tapper explained, “where he will give an ad-libbed speech… One can only imagine what he will say.” When I looked up again, it was already trailing flatly through the sky; it passed before the Washington Monument, and circled back once more over the city.

Trump was successful at hurting so many people because he couldn’t and would never see the harm that has accompanied his actions.

The small crowd around me whooped. A man in a bike helmet danced ecstatically, kicking up his knees. “He’s gone!” someone shouted. “It’s over!” yelled someone else. Suddenly, as the rotors winked against the city’s glare and the helicopter turned east, I was hit by a sinking feeling, which caught me off-guard.

I’d come out here on this cold Potomac morning with my own expectations of how things might go. I had imagined the catharsis of an interaction that I knew now was not possible, and could never be, based though it was on a similar moment from the past.

On August 9, 1974, after he’d resigned the presidency in disgrace, Richard Nixon had said to his staff, “Others may hate you. But those who hate you don’t win unless you hate them… and then you destroy yourself.” And, in tears, he’d left this city, making no pretense about his disgrace. But I realize now that Nixon retained a capacity to glimpse, at the pinnacle of his decades-long pursuit of power, the true shape of the terrible things he’d done to the Republic, to us, and to himself. I think that this is a very basic and human thing, a sort of instinct, but what makes it admirable (even in Nixon) is that I have now seen what becomes of a man beyond its reach, and what becomes of those who rely upon him once he is elevated to power. I had longed for the moment when Trump might see, and when we might watch him see, all he’d done. I wanted this realization to somehow strike him in full view of his supporters. But where was it?

I suppose the events of this past year—not to mention the horror of the last few weeks—should have prepared me for its absence.

Donald Trump couldn’t even pretend to act like a human being. And really, what’s so complicated about that? Which is to say: I guess if I’ve learned anything after these last four years it’s that evil is uncomplicated.

There were no great schemes behind the big lie. The 45th president of the United States was a greedy little man. You could build outward from there however you’d like, but in the end what separates him from more familiar presidential villains is simple. Trump was successful at hurting so many people because he couldn’t and would never see the harm that has accompanied his actions, large and small, from the start.

A few minutes later his helicopter finally climbed out of sight. It was done. The president and his wife had left the White House. Around me the small crowd broke up. The cameramen packed his things. Without paying much attention I followed a pathway through some bare-limbed trees, listening on my phone for the arrival at Andrew’s, where Trump would give one final speech to the crowd gathered there before departing for Florida.

I had tried to secure a ticket to attend this send off. A friend who works on the other side of the aisle said he could set it up. The White House, according to him, was desperate for meat in the room, so desperate that each official guest was allowed to invite five others. And I’d felt sure he could pull it off… until he told me that the Lincoln Project would report on all those who RSVP’d, looking to depress the already sparse attendance.

Now CNN was announcing that the time for this send-off had arrived. Against a backdrop of Air Force One Trump stepped to the podium.

The speakers belted out “Gloria” by Laura Branigan: “Why isn’t anybody calling / You don’t have to answer / Gloria!”

He cocked his head at the crowd. “I want to thank everyone very much,” he said. The same wind that was whipping through the tidal basin lifted and pulled at his coat. His voice echoed thinly. It was a short speech, uncharacteristically direct. He talked up his accomplishments: tax cuts for the wealthy, three justices confirmed to the Supreme Court. He mentioned the Covid vaccines, the rising stock market, “a new force called Space Force,” and “beautiful vets.” And he blamed China for the hundreds of thousands of deaths the country has suffered from the pandemic. He predicted that any future success by the new administration would be because of him: “I’m looking at elements of our economy that are set up to be a rocket ship… up!”

Old LBJ: now here was a villain for all seasons, as complex and doomstruck and tragically flawed at the end of his life as he had been from the very start.

At one point the audience broke into a familiar chant, “U-S-A,” but you could barely catch it over the roar of idling engines. Then, halfway through, the camera pulled out to reveal the size of the crowd: about five people deep and fifty wide. It was embarrassing: a paltry mix of super donors, old friends, established Republicans, and a few unfettered superfans snapping selfies together.

Trump looked out at them, face-to-face with the absence of the people he’d for so long grown accustomed to seeing. In the end he cut his unscripted comments short. “So have a good life,” he said abruptly. “We will see you soon.”

A few minutes later Air Force One departed for Florida. The CNN feed cut back to Washington, DC. I looked up from my phone. How long had I been listening and walking? I felt lost. Up ahead, the path rose to a monument I’d never before seen. Around me the trees had been densely planted, their branches crowding out the blue morning light. The wind kept kicking everything up, throwing shadows across the pale grass. I made my way past a public bathroom cordoned off with yellow tape. TOMORROW IS OURS TO WIN OR LOSE, the memorial’s stone placard read. At its center: a large, rough, Idaho-shaped obelisk. It seemed to be salmon-tinted, about ten feet tall. At last, looking closer, I understood. In front of me was a monument I’d heard about but never before visited: The Lyndon Baines Johnson Memorial Grove.

Old LBJ: now here was a villain for all seasons, as complex and doomstruck and tragically flawed at the end of his life as he had been from the very start.

The grass at its base was overgrown and dense. A crumpled can of Arizona Iced Tea had been left to roll alongside the park benches, which, shabby from neglect, tilted unevenly in the high weeds. Along the walkway surrounding the obelisk was a series of quotations, etched into the glittering concrete, but many of the letters had taken on the same pinkish color of the stone from tarnish, and I could only manage to make out a few lines which I read to myself now, alone.

It was a quote from his 1969 State of the Union. In six days Nixon would take his place, and in another four years he’d be dead.

I hope it may be said, 100 years from now, that we helped to make this country more just. But I believe that at least it will be said that we tried. 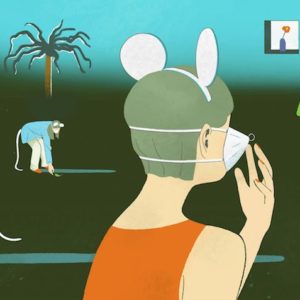 Ard Su’s colorful, stylized illustrations have accompanied fiction by Lorrie Moore in The New Yorker and interviews on NPR NextGen....
© LitHub
Back to top