Roxana Robinson on the Reclamatory Power of the Women's March

Donald Trump, a man not widely known for his intellectual contributions, must be credited for making a substantial change in the language of political discourse. This change was vividly on display during the Womens’ March.

Last fall, a video of Trump appeared, showing him getting off a bus and talking dirty. On the first day of the story, the word for the body part that Trump claimed to grab was printed as “p—-.“ The actual word was considered too graphic and too coarse for release.

Serious journalism has always honored its own standards of decorum, eschewing language that is coarse, sexist, racist or abusive in other ways. These standards are meant to keep the discourse articulate, intelligent, and respectful. The press offers a shared collective vision of discourse, but popular culture rubs against it constantly, and it changes with the times.

Within three days, “p—-“ had been replaced in the mainstream newspapers with the whole word, “pussy.” Editors may have argued against a slang word that was vulgar, contemptuous and sexist. But the horse was out the barn. The video was quickly too widely-known for print editors to conceal the word from the public. And some editors may have wanted to use the actual word, because it’s such a powerful revelation of character. (It is impossible to imagine Barack Obama using this lewd and insulting phrase, even in private.)

So the word came out in print, and with this exchange, potty-mouthed Mr. Trump has changed the nature of our discourse. It’s probably not intentional, (little of what he does seems intentional, since he seems incapable of foreseeing the consequences of his actions,) but this change is big, wide-ranging and significant: he has introduced the word “pussy” into the national dialogue.

The consequences of this were evident at the Womens March in Washington. The mood there was peaceful, and women acted as women are expected to act: friendly, cooperative and tidy. It was a communal effort rather than one led by a visionary. The marchers were considerate: “Watch the step!” “Sorry!” “Excuse me!” There were few trash cans, but people didn’t drop things carelessly on the ground. There were little heaps of trash at the base of a tree, or the corner of a fence, so they’d be easy to clean up later. People smiled, talked, made eye contact. They were friendly, helpful, courteous, empathetic and considerate.

With one big exception: the language had changed. The Mouth had opened, bigly. A joyful raunchiness had been released.

For years, many women protesters have spoken in voices that were dignified, controlled and courteous. But Trump’s use of vulgar and derisive language has changed all that. The signs at the March was a gleeful declaration that this man could no longer expect women to follow traditional rules of public discourse.

One of the things that have always frightened men about women was the fact of their secret organs, their fluids, their hidden, esoteric reproductive processes. These are things about which men knew little and wanted to know less. The women on the March made clear that these frightening secrets would not only be revealed but weaponized. Words and images that men didn’t want to know about would be used in political confrontation.

Trump’s childish sexual slang has produced an exuberant tide of response, making himself the target of coarse, crude, graphic and physiological images, revealed in artful and sometimes hilarious detail on the signs of the marchers.

The pussy, of course, with its various meanings, was ubiquitous. “Paws Off My Body” was illustrated by the silhouette of a seated pussycat. “Pussies Grab Back” was illustrated variously by snarling, clawing cats; “Pussy Power” needed no illustration. What appeared to be a big man in drag, with elaborate maquillage, wore a huge garden hat and a long white satin dress. His sign read, “Go Ahead, Grab my pussy.”

Many signs referred to a woman’s control over her body. “Don’t forget where you came from,” was accompanied by the image of a uterus. “Don’t tread on me,” showed a uterus and ovaries. “My Body My Choice: Get Ovary It!” In case you were not familiar with women’s reproductive organs before the March, you would been so by the end of it. One pair of young women walked through the crowd side by side, each holding on her chest an abstract drawing of a naked breast.

Other signs were more graphic, more indignant: “Tits for Taxes,” one sign read, “You release yours and I’ll release mine.” “Keep your Laws off my (image of a seated cat): In your guts you know he’s nuts.” “Patriarchy is for dicks.” “Grab the patriarchy by the balls,” and “Electile dysfunction.” It seemed that nothing was out of bounds. If Mr. Potty-Mouth was going to talk about private parts in public, then so would they. “Make America Menstruate Again,” was a reference to Trump’s campaign slogan. “Build a Uterine Wall” was a sign held by woman dressed as a vagina – or maybe a uterus – anyway something rounded and pink and layered, probably a reference to Trump’s preposterous promise about the Mexican border. “My Favorite Position is CEO,” said one sign, a jab at the glass ceiling of the business world. Other signs were rebuses: Tiny (image of hand) Can’t grab this (image of seated cat) #grabback.” The somber “Never Again,” written along the bottom of the image of a coat hanger, was a reminder of the punitive abortion laws, and the deaths of an earlier era.

But the main message was the women’s exuberant awareness that they could say what they liked. And what they liked saying was unprintable, or would have been before the rules were changed. Trump himself pretends to abide by the very rules he has violated. At a recent press conference he pointed aggressively at a reporter who was politely asking a question. “Don’t be rude. Don’t be rude,” Trump said. It’s Trump himself who has introduced a strain of profound rudeness into the public discourse. He has no one to blame but himself for the raunchy, joyous exuberance of the pussy-hatted women who responded. And it doesn’t look as though they’ll stop anytime soon.

Paul Auster on Activism, James Baldwin and the Horrors of Trump 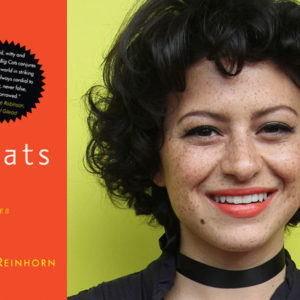 The following is from the audiobook recording of Holiday Reinhorn’s short story collection Big Cats. Each story is read...
© LitHub
Back to top