When a Writer is Inextricably Linked to Place

Donald Hall was Eagle Pond Farm. He was born in Hamden, Connecticut, but he was destined to live in the New Hampshire farm that his great-grandparents bought in 1865. He spent childhood summers there with his grandfather, and first hayed with him in the summer of 1939. Hall was nearly 11, and his family “made it a ceremony.” They ate sandwiches and hard-boiled eggs. For dessert: custard pie and coffee. After lunch, his grandfather “lay on the grass under the apple tree and closed his eyes for a minute.” Then they got back to work: his grandfather making piles with the horse-drawn rake, and young Hall walking, pulling the bullrake behind his steps.

He began writing poetry on that farm the next summer. He was a child among adults there. He was alone, and his imagination came alive: “I wandered through the fields by myself, I daydreamed, I let my soul loose from my body and floated in the air.” Because he was in New Hampshire, but not of it—back home, Hamden was a suburb, “among blocks of similar houses”—the mundane summer world was charged with fascination. In those woods, Hall found “ruins everyplace—especially cellarholes, sometimes sheds, abandoned wells, the rusted machinery of a maple syrup operation, the debris of a sawmill.” He made poems out of those ruins.

In 1975, Hall left his tenured position at the University of Michigan, and moved with his wife, the poet Jane Kenyon, to Eagle Pond. “For me it was coming home,” he wrote, “coming home to the place of language.” He lived there until he died. For 23 years, he has lived there without Kenyon—the same length of time as they were married. Her death at 47, from leukemia, fractured a life of shared rhythms. They wrote poetry. They read aloud to each other. They “played scoreless ping-pong.” They loved. They went to South Danbury Christian Church, where, the first Sunday, the minister quoted Rainer Maria Rilke. Church “started with community, and extended itself to communion.”

All of those were what Hall called “third things.” “Third things are essential to marriages, objects or practices or habits or arts or institutions or games or human beings that provide a site of joint rapture or contentment.” Eagle Pond Farm itself was also a third thing; it was the “house of love and grief; the house of solitude and art; the house of Jane’s depression and my cancers and Jane’s leukemia.”

And then she was gone. “Every day of her dying,” he wrote, “I stayed by her side—a year and a half.” He hasn’t left. His work, about her or not, has remained tinged, or perhaps illuminated, by elegy.

Hall has always been prolific. His freelance journalism was a source of “pride.” He wrote essays for Sports Illustrated, The New Yorker, Poetry, Playboy, The American Scholar, and elsewhere. He wrote textbooks; he wrote reviews. He wrote poetry, of course—he was the U.S. Poet Laureate from 2006-2007.

His prose had to be fast, but his poems simmered. He was a poet of patience. He did not necessarily love needing such patience: “Too long! I wish I did not take so long.” Hall said that his poems took hundreds of drafts: “Most of my poems spend time in some dark drawer . . . You cannot bully [a poem] into excellence by staring at it every morning! You have to give it time to change itself deeply, which is accomplished only by not-looking at it. When a poem is in a drawer, that drawer is a kind of metaphor. You are putting the poem back into that sleep-place, so that dream and daydream can work it over. You are ‘forgetting’ it, putting it in the oubliette.”

In recent years, Hall lived in prose—poetry was a past relic. Carnival of Losses, his book of new essays, will publish soon. Death had been on his mind, and in his work. “I write letters, I take naps, I write essays. The people I love will mourn me, but I won’t be around to commiserate. I become gloomy thinking of insensate things I will leave behind. My survivors will cram into plastic bags the tchotchkes I have, expanding a landfill.”

What concerned him most was Eagle Pond Farm. “My kids and grandkids don’t want to live in rural isolation—why should they?—but it’s melancholy to think of the house emptied out.” He hadn’t been to the pond much since his wife died, but it is so clear in his poetry as to feel transcendent: “At the pond’s edge / old life warms from the suspense of winter.” We move closer with him, to a place he has known since childhood, the place where his poetry was born:

Fish hover
under the corrupt surface of April ice, and everything
trembles in the moment’s skin and surge: grasping
nothing, wishing only to fall as the stone wishes,
or to rise with the wash of fire, I separate
into sky as a bird, into water as a fish,
or as water itself, or as weeds that waver in water.

Writing With and Through Pain 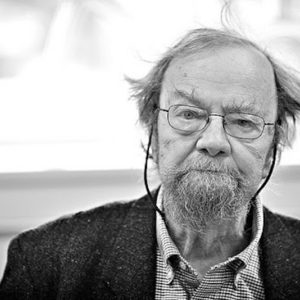 In 1985, when I was a graduate student at the Iowa Writers’ Workshop, my best friend Lucy and I would become obsessed by what...
© LitHub
Back to top