Donald Antrim’s Book Speaks Directly to Those Suffering With Depression

Donald Antrim’s new memoir, One Friday in April, is available today, so we spoke to him about world-building, Lord of the Rings, and who this book is for.

Donald Antrim: This book is unlike any other that I have written, insofar as it is meant to be read by people who might need it, people in a bad place with depression and suicide, their caretakers, maybe their doctors. I’d not ever written this way before—toward utility rather than art—and I had a sense of mission and privilege during the writing. I hope that the book will help people going through what I went through.

DA: The first book I fell in love with was Tolkien’s Lord of the Rings trilogy. I was fourteen. I had been reading science fiction—H.G. Wells, Arthur C. Clark, Philip K. Dick—in a methodical and orderly way, like a kid preparing to be a writer. This was when I was living in Miami, Florida. Modern Books, in South Miami, had a good selection of what I needed, and I used to go in and check out the Tolkien, a slightly expensive purchase. It was important to me to get the whole set, and when I finally did, I treasured it. What a world it makes—what worlds! I couldn’t stop reading. I took my time, carrying the volumes around, reading at talking speed, and at night my parents had to order me to turn out the bedroom lights. But I wouldn’t, and at some point I began reading under the covers with a flashlight. Things at home weren’t good at that time, and the Tolkien was a great escape.

DA: I have writer’s block, or something like it, when I’m feeling low, though writing is also one of the great mood elevators. Typically, I sit it out and try not to worry. During this time, I fidget on the computer, or take naps—I have never found any particularly good routine for getting going again. Sometimes it seems to me that the time off from actual writing (as opposed to waiting to write) is useful. When I do finally make it back, after a few days or maybe longer, I may have something new—a new word, a new thread, some piece of dialog, etc.—and things may pick up from there, and writing might take off, at least for a while. Then I’m back in the doghouse, as a rule, and the waiting process resumes.

I just try to remember to trust the world, to trust that things will come through, as it were, and that the book or the story will unfold. It’s not usually until very late stages in the writing that I feel as if I know where I’m going. Until then, until the closing, it’s all stopping and starting.

DA: I like to start in the morning, mid-morning, with coffee and the day ahead of me. If I’m struggling with my mood—I have a history of mood disorders—then this might not be easily possible, and I’ll spend the part of the day poking around at the manuscript, rereading, editing. But when things are going well, and writing is proceeding from day to day in an even and fluid manner—that’s the best. Then I can write late into the night, quite happily. If only it were always that way! 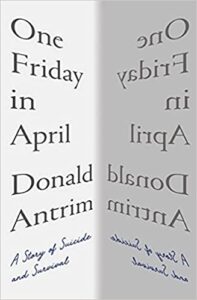 One Friday in April by Donald Antrim is available now from W. W. Norton & Co. 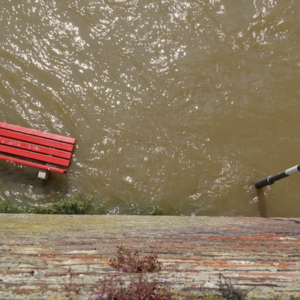 As remote work policies kicked in during the pandemic, Manhattan’s financial jet set wasted little time in snapping up beachfront...
© LitHub
Back to top
Loading Comments...