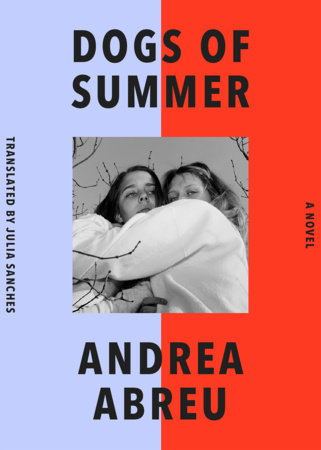 The following is from Andrea Abreu's debut novel Dogs of Summer, translated by Julia Sanches. Abreu was born in 1995 in Tenerife, Spain. In 2021, Granta named her one of the best Spanish writers under the age of 35. Dogs of Summer will be translated into 13 languages and adapted for the screen by El Estudio.

Navy blue, pink, yellow, more yellow, burnt yellow, fried-yolk yellow, and red. That’s what the houses in the neighborhood were like, bright and colorful, like the squares on a Ludo board. They came in all kinds of colors and were either half-started or half-done. At any rate, none of the houses were finished, they were all imperfect monsters. Nearly every house had at least one bit left without whitewash, the exposed cinder blocks stained with mildew and rising damp. Nearly every house had been built by the people who lived in them. Stone by stone, block by block. Nearly every house had been built without a permit. Nearly every house belonged to a single family: the Smokes family, the Tussler family, the Pickers, the Mourners, the Horse family, our Chinese friends, the Scrubs, our Black friends. Like birds that set up their nests right next to each other, one on top of the other, to keep safe.

And all at a slant. A vertical neighborhood on a vertical mountain crowded with low-bellied clouds and sliced through by a long, wide cave-like tunnel that went from the tip-top of the mountain all the way to the ocean, like the mantle in the song about the Virgen de Candelaria, the prettiest saint, the one with the darkest skin. So vertical that sometimes it seemed like the shiny bee-em-dub-yous would skid all the way down, music blasting. That they’d grow wings and fly us to San Marcos beach. But that didn’t happen, it never happened. Instead the drivers would set their handy-brakes and shift into first gear, then cross themselves as they burned rubber uphill. They always crossed themselves when they passed the church of the Virgen del Rosario.

There were two kinds of houses in our neighborhood, and they were all jumbled together. Some were old, like Doña Carmen’s and my nana’s. Those ones were stone and had small inner patios with bedrooms laid around them. Patios with roofs made of wriggly tin that my nana called wiggly tin and that people had started saying gave you cancer. A patio that let in a light so bright, a light stored for so many thousands of years, that it set all the canaries aflutter in their cages and had them singing out of control— peepeepeepeepeepee—from the first glow of day until nightfall. And the ferns and the bougainvillea that crept through the gap between the front door and the wiggly tin roof were out of control too. When the light hit them, the plants shot up so fast it was like they were walking up the walls, like they were dancing on the walls.

Then there were the other, more modern houses. The ones that belonged to the younger people who worked in the South in construction and cleaning hotels, the ones with the shiny bee-em-dub-yous in metallic blue, metallic red, and metallic yellow with carriages that hugged the ground, so low that when they drove up through the neighborhood they left half their car bits behind them, and played “Pobre diabla” at full blast and “Agüita” and “Mentirosa” and “Una ráfaga de amor” at full blast and “Felina” a gazillion times at full blast. Those ones, the new houses, were two stories tall and had a load of windows and banisters and a gate, most of all they had a gate, a real big one, a huge one, an enormous one that could let in a truck the size of a pine tree, all fuzzy with pine needles, filled with bananas and tomatoes and presents like Babybjörns and Barbies dressed up as nurses. Those were the most colorful of all the houses—pink, yellow, even yellower, and fried-yolk yellow. Venezuelan-style, they said. Like the houses in Venezuela, dafuck.

The topmost houses grew up from the ground like desert truffles under pine needles when the rain got the earth damp. The first houses in the neighborhood grew up from the earth next to a skirt of pine trees at the foothills of the vulcano—vulcano my nana called it, and she always said skirt like the vulcano was Shakira. There were pine cones all over the roof tiles and roof terraces of the topmost houses in the neighborhood, and a lot of the time they looked less like houses built by humans than places where witches and elves might live. As for the rest of the neighborhood, everything but the houses was dark green, the color of the forest. On clear days you could see the vulcano. It almost never happened, but everyone knew that behind the clouds lived a giant who was 3,718 meters tall and could set fire to all of us if he wanted.

My house was a mountain of houses built on top of my great-grandma Edita’s house, the only one with a permit, the only one that had a number on it. Since my house was made up of a bunch of other houses, we had to coordinate whenever we wanted to watch TV or cook food. If we turned on two ovens at the same time, the power blew. If Ma and Dad and Nana and Nana’s brother Tío Ovidio and me, meaning everyone who lived in that house, turned on every TV at the same time, I’d feel like the house was exploding and I was flying up, up in the air.

Below our house was Juanita Banana’s and below his the Cueva del Viento, and farther down from the cave lived a German woman who’d give me skipping ropes as presents, and below her you had the house of a man called Gracián whose eyebrows were like two centipedes sticky-taped to his face, and below him lived this girl called Saray, who was two years older and sort of our friend except she acted like she was this big-deal celebrity because her parents ran a bar, and below her house you had Eulalia’s place, where the women in the neighborhood got together to peel taters and yak about the fact that Antonio’s girl Zuleyma was getting kind of chunky, and about what’d happened the day before on El diario de Patricia, and below that lived a girl who went to university in La Laguna and when she came home on weekends said things like my friends yea beer yea my cousin yea panties yea, and my ma would turn round and ask me if uni made people stupid. And below that you had Eufrasia’s house, and below her lived a cousin of Nana’s whose house was surrounded by grapevines and orange trees and who people said kept two women under his roof, his wife and her sister, who was like their servant, because his sister-in-law took care of the property while his wife just sat around all dollied up, and below that you had Melva’s house, and then the gayhouse, and then Conchi’s house, and right below Conchi’s was Isora’s minimarket, and opposite the minimarket was the cultural center, and below the cultural center was the bar, and below the bar was Doña Carmen’s house, and beyond that I had no idea, because as far as I was concerned Doña Carmen’s house was the end of the world.

First lines of classic novels, if no one had childcare.

August Kitko and the Mechas from Space by Alex White, Read by Hayden Bishop 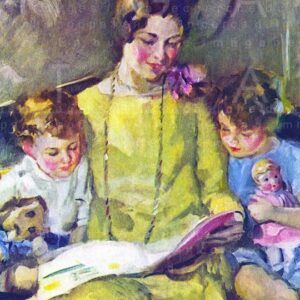 First lines of classic novels, if no one had childcare. Mrs. Dalloway Mrs. Dalloway said she would buy the flowers herself, but when she tried to get her kid to put on pants he said...
© LitHub
Back to top