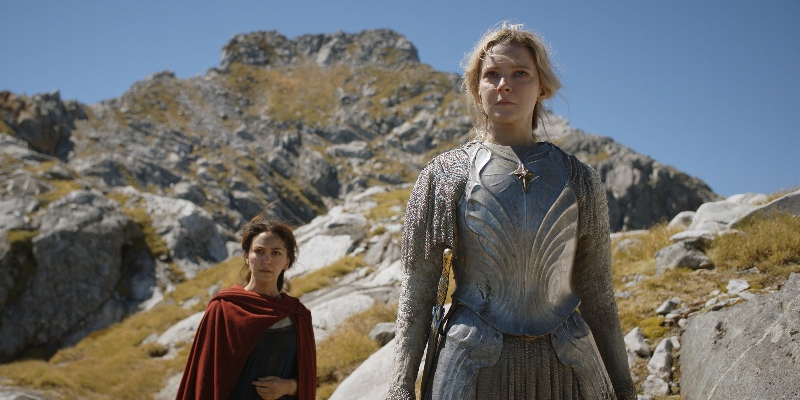 Do the Rings of Power Creators Care About the Original Text at All? (Should We?)

Disclaimer: No marriage was harmed in the making of this recap.

DYLAN: We’ve reached the penultimate episode of The Rings of Power’s first season, an entirely watchable television show that, somehow, has become the single greatest threat to our marriage.

JENNA: I’m not the one making a notation every time you sigh.

DYLAN: You and I try not to talk during the show and take individual handwritten notes so that we can save our conversation for these recaps, but about three times per episode I hear you bite back some exclamation and then scribble madly in your notebook, and (for purely professional reasons and not because I enjoy getting your goat) I usually write down “Jenna is mad about [magic rocks / missing husband / et cetera] for some reason.” When the episode’s over, I usually ask you to explain why you’re so miffed, after which I still mostly don’t get it. Is this what going to Batman movies with me is like?

JENNA: No, because you like the Batman movies. You’ve explained to me (exhaustively) how, say, the last 30 years of comics—

JENNA: —have been completely ignored by basically all film adaptations, and I’m sure that’s frustrating to you. However, all of those movies seem to have at least some kind of affection for the source material… whereas with Rings of Power, at this point I truly cannot detect a single crumb of interest in the text from the creators. It’s the most flavorless kind of fanfiction, which is a comparison I hesitate to use because fanfiction tends to have real passion for exploring a character or a theme or a “what if,” even when they’re only loosely couched within the larger property.

I truly cannot detect a single crumb of interest in the text from the creators.

The Rings of Power writers’ room has, in contrast, strip-mined the Appendices for names and hodgepodged them together with new characters and a random assortment of badly paced original plot machinations, without any concerns for pesky things like theme or tone. Its sole purpose seems to be to pump the IP for money and make people who watched the movies feel like they’re getting to see how all of their favorite people and places came to exist. (That’s not what they’re seeing.)

Whether it’s Galadriel mentioning Celeborn to Theo only to set up a love triangle in a future season, a big Balrog reveal that’s simply a frame-for-frame recreation of the much better scene from The Fellowship of the Rings, or a whole fraught ISILDUR IS DEAD arc rendered completely toothless from inception because anyone who watched Fellowship knows he’s alive, it’s all so coldly cynical.

DYLAN: Let’s get into the nitty-gritty of it, then, with some recap for those readers who don’t watch the show but just enjoy our bickering. Even for me, there is a lot to harp on this week. “The Eye” picks up in the aftermath of Adar successfully transforming the Southlands into a desolate, ashen wasteland that is renamed Mordor via a truly cringeworthy on-screen chyron. The human forces of the Southlands and Númenor have been absolutely wrecked, with hundreds dead or wounded. Naturally, the only named protagonist who’s killed is Ontamo (Anthony Crum), a young soldier of Númenor who announced his retirement moments before Mount Doom erupted.

As Jenna pointed out, we’re led to believe that Isildur (Maxim Baldry) has been crushed to death in a collapsed building, but we all know better. Queen Regent Míriel (Cynthia Addai-Robinson) has been blinded, but swears that Númenor will return to Middle-earth in force to fight against Mordor alongside the elves. While Miriel’s forces are away, Commander Galadriel (Morfydd Clark) will return to Lindon to face royal judgment, escorting the wounded King Halbrand (Charlie Vickers) to the elvish healers who can do something about that nasty infected cut on his thorax.

The conflict within the Dwarvish royal family is genuinely compelling.

JENNA: And that’s just a third of the episode’s plots, taking us from the streamlined focus of last week back into the mire. Over in Khazad-dûm, Elrond (Robert Aramayo) humbly asks for access to the mithril mine and King Durin III (Peter Mullan) turns him down, leading Prince Durin (Owain Arthur) to defy him and break through to the main mithril vein. (This being a deep chasm really undermines the whole “they delved too greedily and too deep” thing, since this is instead “they delved at all and found a hole,” but I digress.)

DYLAN: Yeah, if Khazad-dûm dooms itself because Durin IV plumbs the mountain for mithril on a mercy mission for the elves, that certainly undercuts the idea that its demise was purchased with greed. Taking this show as its own product, however (and imagining, for a moment, that I don’t really care about what magic properties these rocks might have), Aramayo, Arthur, Mullan, and Sophia Novete as Princess Disa are the heart and soul of this show, and the conflict within the Dwarvish royal family is genuinely compelling. The scene in which Prince Durin offers to tell Elrond his secret name, the one reserved only for family, very nearly choked me up.

JENNA: Agreed. There is a lot of very good work being done with the relationships between the dwarves, and it’s refreshing to care about, well, anything going on in this show.

Should nerds of different stripe even be allowed to intermarry?

On the opposite end of caring about this show, this week we also get Nori and the Harfoots! Interspersed with scenes of horrific loss and heated emotions from our other two plotlines, we follow these hapless provincials encountering some very coincidentally placed destruction from the eruption, asking the Stranger for help, casting him out, receiving the bountiful results of his efforts, invoking the wrath of  Eminem Lady (Bridie Sisson) et. al, and then setting out to warn the Stranger. It’s a lot, and also nothing.

DYLAN: The Harfoot storyline has also exhausted my patience, as we’ve now ping-ponged between “the caravan fears the Stranger” and “the caravan loves the Stranger” far too many times without any other developments. The business with the Eminem Lady and her two compatriots is taking far too long to go anywhere. So far, across three hours, they’ve offered nothing but some striking costume design, some intimidating glances, and one shocking act of violence against bystanders. This is also how villains often get introduced on Dragon Ball Z, and at an only slightly faster pace. This should hopefully change soon, seeing as it’s the only one of the season’s running story arcs that didn’t come to some sort of bookmark this week.

JENNA: It’s really jumping out to me that I don’t care at all what their deal is. I’ve talked before about not enjoying speculation when watching a show, but there’s a difference between not wanting to dig into a little breadcrumb trail of narrative clues and not having any interest in what’s going on. With Eminem Lady, the Stranger, and the Harfoots, I fall firmly into the latter camp. The only curiosity I can find in my heart is how on earth they’ll make this seem like it matters in the grand scheme of things before the season ends.

DYLAN: There’s just one episode remaining! Can The Rings of Power convince Jenna to watch Season Two? Am I beginning to catch her distaste of this show? Should nerds of different stripe even be allowed to intermarry? Find out next Friday. 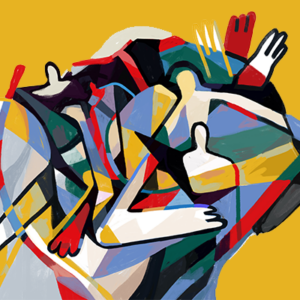 Most literary conversations I’ve had about narrators in novels are about which point of view works best: 1st person (narrator...
© LitHub
Back to top