Divorce is in the Air 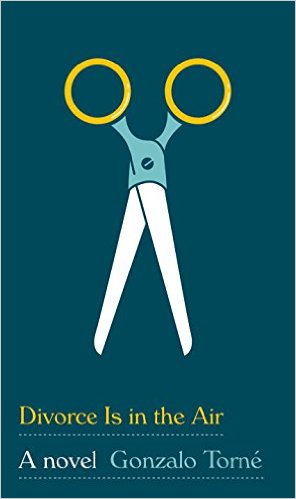 The following is from Gonzalo Torné’s novel, Divorce is in the Air. Torné was born in Barcelona in 1976. He is the author of two previous novels published in Spain, for which he won the Premio Jaén de Novela and was a finalist for the Premio Nacional de Narrativa. He has also translated work by William Wordsworth and John Ashbery into Spanish. He lives in Barcelona.

You have to understand: we were good together. We weren’t even a couple with problems—our days were full of happy hours. I’d accepted a job while we sorted out the mess of my inheritance, and the people there treated me like an emergency fund. They thought that if we found ourselves in trouble, I could inject enough healthy capital to get through four or five bumpy months. I never set foot in the office before eleven. Helen and I went out almost every night to try exotic gins, trailing a boozy wake behind us; for three months Barcelona conspired to show us exactly what it could do for a pair of newlyweds disposed to act like nocturnal animals. I suppose I already sensed that Helen should find herself a job sooner rather than later, that an active and healthy woman should spend her days doing something more fulfilling than shaking off a hangover. I started to look more kindly on the prospect of reining ourselves in: we’d be like those spermatophytes that wait for night to fall and then spread open stupendous, fleshy petals, as big as ships, and we’d pollinate the most trivial of tasks with gentle excitement. But I was in no hurry.

“I want to meet people. Everyone you can introduce me to.”

While I was enjoying life as a newlywed, Helen had been busy cooking up fresh ambitions. She’d convinced herself there were select circles of artists, wealthy, interesting, and glamorous people, or some such nonsense. She had only to learn to wield me like a key and she’d be able to access those secret spaces, and fulfill the fantasy that she’d been put on this earth to enchant the eyes and ears of the most refined society—whose specifics she’d never paused to consider. She nagged me stubbornly, with the sulky face I’d already learned to recognize as the sign she wasn’t going to let it go. We had so much without leaving the circle of our marriage—why kill ourselves to leave the house? Why, when we would only be exposing all the precious things that germinate in intimacy to the corrosive atmosphere of gossip? It’s one of the blind spots you two share, both the women I’ve loved. After all, didn’t you take home the best guy at the party? Didn’t we have fun together? Didn’t your orgasms come without complications beyond the ones we imposed by ludic agreement? Wasn’t the apartment you decorated comfortable? Didn’t we live in the city of your choice?

And so we began to visit places whose names are pronounced with an eye roll. In Barcelona they weren’t as into time travel as in Madrid. Here, the draw was the exoticism of the place itself: hotel terraces, ships, museums that opened their doors at night, towers, greenhouses. I had to get back in touch with people I’d cut off four years before because of the slime that oozed from them: phony cousins, Dad’s business colleagues, classmates from ESADE, occasional hook-ups, confidants . . . They didn’t receive me coldly—no sooner did we show our faces than a curtain of congratulations came down between us and them. I was the guy who’d been left out of the good life: some said because of misguided ambition, while others mentioned one hell of a family mess. Now that I was returning on the arm of an American stunner, why would they close their doors on me? They had no qualms—the eroticism of return and the anguish of the firstborn’s departure were fodder for mass-market dramas, and we fancied ourselves sophisticates, we flattered ourselves that our minds were open and cosmopolitan, that we weren’t really Spanish. Plus, they thought Helen was funny.

Helen went mad with excitement. She compared my friends favorably to the rich people she saw on TV in the United States, whose weddings and divorces and parties and jewels she followed in magazines. She knew the details of every liaison conducted by people whose only purpose in life was consuming (you couldn’t call what they did “drinking”) cold martinis on boats. She knew who slept with whom, who sat beside whom at every dinner and at every race, who slipped from the spotlight, who fell into disgrace. If she hadn’t spent so much time too drunk to hold a pen, she could have written a gossip column.

At home, while she tried to stuff herself into stockings that would have been tight on a little girl, or in the taxi, where she would keep smoothing her hair, I tried to fill her in on backstories. I tried to prepare her, but she was too excited to absorb the raw truth of what I had to tell her, and I’ve never had the patience to make news digestible: this was no longer my scene, we were out of place, they would never accept someone like her. So I chose to arrive late, once the conversations were under way, and cross the room avoiding the bored looks from other guests. It was better than arriving at the beginning, when the groups were still unformed and hanging in the air like interstellar gas.

Helen walked into those living rooms, strolled among the tables, exchanged glances with people, and chewed on slices of ham, all the while convinced that something golden was stirring within her, a motor of human allure. She sashayed around with her chin held high as if she were a sliver of America itself, or a shard of meteorite just landed from outer space so we could admire its shine. She was desperate to reveal her hidden social talent to the world, though what that talent consisted of neither of us knew.

When Helen embraced me and told me she loved me, I merely smiled. While she headed off to join the cliques, I avoided conversation, retreating to a corner to observe the swagger of that body into which she was emptying the second, the third, the fifth gin and tonic. From that distance, I could ignore the emotions that flowed from our shared life, and instead tune in to the wavelength of the men around us who shared my cultural makeup. Without the filter of my love, they would see this: long blonde hair; a wide-eyed innocent from Montana with a sinuous body, grown amid the heaps of dimwits that spring up every year in the Midwest (Montana was somewhere around there); a rube with a typing certificate, plus half a bachelor’s degree in Romance Languages that hadn’t even given her a sense of tact when it came to hammering out French phrases—she always sounded as if she was chewing gum (she thought it was a Parisian accent). They’d see a girl who was expert in mixing drinks with soda and who’d sprouted a pair of tits you couldn’t ignore—living proof that the only democratic force on this earth is the one that distributes sex appeal. Of course, Helen’s wasn’t going to help her at all as long as she denied them the festival of fluids she reserved for me alone.

As for the women—well, I didn’t kid myself. I knew from the get-go they would be much worse. All those girls who knew how best to arrange their curves under well-tailored clothes, whose skill with color did an excellent job softening the heavy jaws they’d received as the twisted legacy of inbred generations. They were rivals to be reckoned with. Their parents’ money had kept them a long way from the real action, but they had a magnificent collective experience in getting what was “theirs.” They had no problem encircling Helen with an air of familiarity, but they didn’t let her into the murmur of their important, whispered conversations. They refused to make room for her. If they were debating some delicate point that could have created some complicity, they always lowered their voices. It was sad to watch her in those spacious rooms, flitting from one little group to the next, being tossed a handful of phrases like birdseed. A couple of times, I caught whichever girl Helen had chosen as a trial “best friend” fleeing to a remote corner to avoid her.

Sometimes we stayed until the end, when the group was wrecked, disheveled, blundering through the cigarette butts of repetitive conversations, glasses in hand while we composed precarious tableaux, sprawled over tables and chairs. If they opened the windows, a pleasant breeze would make the hairs on our arms stand up, and then we’d settle again into a friendly lassitude. It was lovely to seek out Helen then, to watch her smoking slowly in that almost empty space, effortlessly emitting the essential notes of feminine charm. When I let that calm state enfold me, the fibers of my eyes once again knitted into a lover’s gaze that saw clearly how Helen’s spirit was being chipped away. When we got back to the Turret, instead of putting on an album or a film and relaxing, she’d tell me she wanted to be alone. But she’d end up sitting cross-legged on the living room floor, ruining my chances of watching TV. They showed good Westerns at that hour, heroes with morals and firm ideas about how to live them. Don’t you ever feel nostalgic for a simpler, unsullied world? With her jaw tensed that way, it wasn’t hard to imagine that Helen could spend the whole night awake, grinding the accumulated contempt between her molars until it turned to resentful dust.

From DIVORCE IS IN THE AIR. Used with permission of Knopf. Copyright © 2016 by Gonzalo Torné.

What Does Silence Mean in the Age of Digital Noise? Because Shakespeare, it seems, knew everything, he knew that civilization is constituted primarily through sound. Hamlet’s...
© LitHub
Back to top