VIA THE NEW PRESS

Franz Nicolay May or May Not Be an "Asshole, Big Time"

I picked Cvetan up from his job at the national radio station, and he snorted a pinch of snuff off the back of his hand.

“I haven’t been sleeping much,” he explained. He had been on the road for four days with a former Bad Seeds guitarist and up late the night before a strange errand. “This is going to sound especially weird to an American, but it is time to register kids for school. They are required to go, but in some neighborhoods there is not enough room in the good schools for all the kids.” So parents began lining up outside the schools at one a.m. and formed informal cartels to register one another’s kids until the classes were full. “They are calling names at one a.m., two a.m., until six thirty in the morning, like it’s a concentration camp.” He was a serious fellow, baby-faced, with a soul patch and wide-set, catlike but earnest eyes, cuffed jeans and Doc Marten boots. His passion was the avant-jazz of the original Knitting Factory and the scene associated with John Zorn, Eugene Chadbourne (whom he’d recently booked), and the avant-garde accordionist Guy Klucevsek.

The booking process for all the Balkan shows had been haphazard: I’d get a few email addresses from someone in Romania who knew someone in Serbia who might know someone in Bulgaria, who couldn’t do it himself but here were his friends in Sofia. I’d first talked to a Nikolai who directed me to Kostya, who worked with Cvetan.

There had been some unpleasantness before I’d left the United States. Kostya had passed me off to Cvetan with an exchange in the morning of February 18:

“Hi Franz, my colleague Cvetan shall be in contact with you regarding the sofia(and probably ruse) booking. see u in sofia. cheers”

“Cool,” I replied, “I’ve been talking to Cvetan already. Thanks!”

“ok, no probs, we work together so everything is fine. cheers”

you are an asshole big time.

The reason I think so is that when Nikolay asked me to help with promotion I said OK. While I was waiting for your promo material (you never send me one) I have booked you for a venue in Sofia for the 6th april.

Yesterday I understood that you are booking yourself with my colleague Cvetan, who has your contact from ME. I was the person to let him know about you and show him your website. So while I am working on your dates I understood you have been already dealing with someone else. So the result is that there is a double booking for the same date in Sofia in two different venues.

And you owe us (Nikolay and ME) 100 euros for that booking you have done through our contacts. And if you don’t pay us I will bring the finance police to your gigs and you have to spend at least 10 hours in the police station explaining in writing why are you working in Bulgaria and not paying taxes on your earnings. Then you will be charge with tax fraud, not only in Bulgaria, but in the states.

“I think there has been a big misunderstanding,” I replied. “You said yesterday you and Cvetan are colleagues, right? So what is the problem?”

Don’t worry. I like you. I work together with Cvetan. No problems. He will organize everything. I apologize for my email, but I was pissed because we (me and nikolay) to promote you on Nikolay’s condition. Nikolay made me problems last night that we (me and Cvetan) are booking the same artists for the same date in two different venues. So, please don’t worry. Cvetan will take care of everything regarding your gigs.

“Drunk,” I said to Maria, relieved.

“You’re gonna stay with my friend,” said Cvetan. “Normally you could stay with me, but I’m having a divorce. I just finally found a new place, but it’s pretty dirty now… I was living the last six months at the radio station; I had a couch there.”

We arrived at a bar and approached a slight, dark, bearded hustler with thin eyes and a permanently raised brow. He was chain-smoking slim Russian cigarettes.

“This is Kostya,” Cvetan said. “He’s the best unsuccessful promoter in Bulgaria.”

“It’s true!” Kostya grinned. “I was the first to bring American wrestling to Bulgaria” (professional wrestling, that is). “And the last. Then I did a tour of thirty-five tango dancers from Argentina. But they wouldn’t pay me presales, so I had to cancel. Do you know Fucking Hell beer? Here, have one. What do you think?”

In addition to being Bulgaria’s best unsuccessful concert promoter, Kostya Todorov—“like told-her-off,” he said—had recently purchased the exclusive rights to distribute an undistinguished pilsner associated, for marketing purposes, with the Austrian town of Fucking.

“First my friend and I rented a warehouse. We were going to make [it into] a venue, and rehearsal spaces, and so on. But I walked away.” He bought a truckload of Fucking Hell and stashed it in the empty warehouse, hawking it case by case to local bars and party promoters.

“The problem is, Bulgarians don’t have any taste. They don’t know about brands. The bar owners, they say, ‘I can get Corona for seventy euro cents,’ trying to [bring] me down. Well, OK, then kids are going to the corner store and buying Corona even cheaper and drink them at your place. I have a warehouse full of this beer, I’d rather just go and drink it myself for the next ten years than give you that price, I tell them. Bulgaria is entering the Schengen zone, free-trade zone, and then all the prices are going to double. Heineken price is going to double. This price I will lock in now, then in two years it’ll be cheap” by comparison.

He can, he offered, get me the fake EU passport, for five hundred euros, that I’d need to avoid the FBI background checks required to live and work in Europe. He outlined a conspiracy theory that Justin Bieber, Celine Dion, Nickelback, Avril Lavigne, and Bryan Adams are the work of an elaborate Canadian-based plot to destroy the US music industry. It took me longer than it should have to realize that he was pulling my leg.

I was reminded of Kaplan’s description of one of his Balkan contacts: “A classic hustler and survivor… a type who never starts revolutions but who always figures out how to benefit from… whatever the new order is.” Or, per West, “one of those strange polyglots who seem to have been brought up in some alley where several civilizations put out their ash-cans, since only bits and pieces have come their way, never the real meat.”

Kostya interrupted my thoughts. “We need you for an actor tomorrow!” He and Cvetan were collaborating on a Web series centered on a vampire character they call “Zozulka,” which is Czech and Ukrainian for “cuckoo” but also related to the Serbian zezenye (meaning “ joking”)—and a little like a Bulgarian term for which the American equivalent would be “a mooch.”

Some years ago he was living in London, working as a tour manager (he’d been tour-managing the Seattle gypsy-rock band Kultur Shock when I saw them in Zagreb in 2007) and festival promoter. He was married to an Italian architect. “But our schedules were never the same, and I thought, I need to go live in Bulgaria, since after all I am Bulgarian. She said, ‘If you go, just leave me the keys.’ So I bought the tickets at two a.m. and left at six a.m. I left everything—a [Hammond] C3 [organ] with a Leslie, a DX7 [synthesizer], some expensive guitars. . . . We divorced over the Internet. You can do that in UK.”

Once back in Bulgaria, he promoted big arena shows, he claimed: the Scorpions, Jennifer Lopez, a guy detoxing from a coke habit who’d been in Poison and Mr. Big. A dispute with ticket middlemen of dubious provenance led to his blacklist from that business, he said. “I was having dreams about taking a Kalashnikov and killing them. I got a Facebook message from them saying, ‘You’re insane.’ I replied, ‘I am killing you—in my dreams.’ You understand the difference? Not ‘I’m gonna kill you.’ That would be a threat.”

“You’re staying in my bed,” he added, as we prepared to leave. “I only have sex with young boys there. Under eleven, it’s not illegal. Over eleven, they’re minors, it’s illegal. Same with old people: necrophilia, there is no law against it.” He gave me a poker-faced look to see how I’d react to the joke.

“Here”—we arrived at his building, and he opened the door to his walkup. He was solicitous, even excessively so, about my comfort, airing out the room, opening a jar of soap by the bed for fragrance, insisting on digging out a night-light from the other room so I had a reading lamp, asking if two towels was enough. “When you’re here, you’re like my child.”

He gestured at the kitchen, and we opened a couple of Fucking Hells from a case in the corner. “It is better than a squat but worse than an apartment. I have the lease, but I’m not living here. I live with my family, but I keep this place, for when my girlfriend is here from Plovdiv. In the meantime some students are living there. I say it’s like a squat because they haven’t paid rent in months. They left a receipt for an electric bill they paid, and I was shocked. They are always on amphetamines, and meth, and you know… Just don’t open those doors, they’re broken. I had a fit and broke everything in the room.” 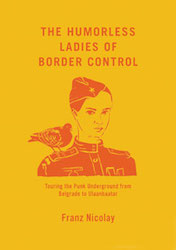 From THE HUMORLESS LADIES OF BORDER CONTROL. Copyright © 2016 Franz Nicolay. Reprinted with permission from The New Press.

Franz Nicolay is a New York musician who has played with myriad acts including the Hold Steady, Against Me!, and the Dresden Dolls and was a founding member of the composer/performer collective Anti-Social music. Dying Scene recently named him #1 of "Punk's 10 Best Accordion Players."He teaches at Bard College. The Humorless Ladies of Border Control is his first book.

The Editor Inside My Head is a Cruel and Demanding S.O.B. 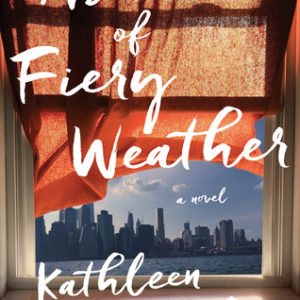 December 1960 Eileen and Sean stood on the corner of Flatbush Avenue and Sterling Place in the crowd of onlookers. The tail...
© LitHub
Back to top
Loading Comments...