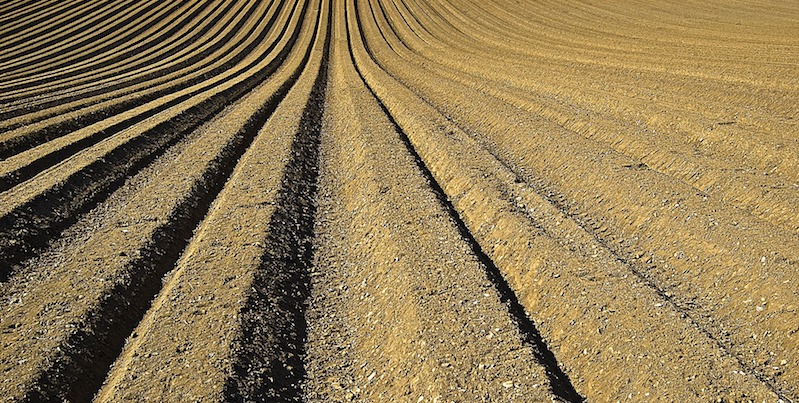 Digging Beyond the Myths of America’s Red-Blue Divide

Early morning, Maine. We arrive before 6 am for our morning meeting, still groggy, skin chilled. The shores of the bay at the edge of the fields are just starting to wake with ducks and rustling marsh grass. We smear sunscreen on our arms and faces and lower backs while we make the day’s plan, a quick process of divide and conquer. I am headed to the kale field, followed by spinach harvest, followed by basil, parsley, beets, fennel. I pull on my orange Grundéns rain pants; it is not raining, but the dew will soak the sleeves of my flannel shirt, and I am sparing my pants. The dust on the farm roads is subdued, weighed down by the morning fog; later, when the sun licks its hot yellow tongue across the land, dust will kick up behind truck tires. But now, sunrise is happening behind a blue-gray cloud, and it is time to work.

This is not how American Harvest: God Country, and Farming in the Heartland begins, but it isn’t far off. It’s how my own day might begin, on the small organic vegetable farm where I spent most of my twenties. American Harvest chronicles a much different kind of farming from diversified vegetables. Marie Mutsuki Mockett—a San Francisco journalist, an atheist, and a woman of color—begins by asking a question: why is there such a cultural divide between the food choices of her liberal friends and those of the often religious farmers of the Midwest? She wanted to know why GMOs are embraced by some and vehemently rejected by others.

It’s 2016, and the narrative of “a divided America” permeates everything. Mockett travels to the 7,000-acre Nebraska wheat farm her white father’s family has owned for over a century to explore the question of how and why GMOs are emblematic of this divide. She ends up befriending the leader of the crew that harvests her family’s wheat, an evangelical Christian named Eric Wolgemuth. Mockett joins them as they follow the wheat harvest over the course of the summer, across several central-U.S. states. The resulting book expands far beyond its initial question of GMOs to become a meditation on place, brimming with acute and visceral details of landscape and farm work; identity; how food politics and social politics interact; and of the complex web formed by food systems, farming, and capitalism.

Early morning, Texas. “A blotch of plum stains the blackness, cracking open the night for the sunlight to begin to seep through,” Mockett writes. “The first rays tug open the sky—fingers prying the black moss. The pink spreads across the horizon; you can see it crawling and moving, like a drop of paint in water… drops of light color the clouds lavender and gold.” Much like my own experience of farm mornings, moments like this feed the idealized, consumable story of farming. It’s true, they are beautiful enough to crack open a heart. But, as Mockett writes, “There is work to do. Enough nonsense about clouds.”

Mockett reports that US Custom Harvesters, Inc.—a group to which Eric, his son Juston, and his crew of Pennsylvania workers belong—is the result of several historical forces. A lack of field hands during World War I spurred the automation of farm tasks. The price of grain went up, giving farmers capital to invest in machinery like combines. World War II demanded greater output of commodity crops and food while once again leaving shortages of manual laborers. Enter custom harvesters, who also saved farmers from maintenance of large equipment at a cost many find worth it.

The myth of “pure” agriculture ignores the fact that any agriculture is fundamentally a manipulation of land.

Mockett ventures into their midst, into a harvest crew of mostly evangelical Christian white men.

On an interpersonal level, they aren’t all that threatening. Homophobia and queer erasure is present—“Mostly, there aren’t any gays on the farms,” Eric says early in the book. But the people on this harvest crew are kind, if a little distant. Mockett befriends Eric and Juston, bonding over a shared curiosity about the world and humanity, and a mutual devotion to questioning—even questioning God, which Juston does frequently.

But like all white people, each member of this crew has steeped in a tradition of white supremacy and patriarchy. All of them are surprised that Mockett knows gay people, and although the men on the crew treat the few women around them differently—often not allowing them to go hunting or drinking with them—Mockett can’t help but note the subtle ways in which she is particularly othered because of her race. She sees herself as causing rifts within the group that bubble up throughout their journey across the fields of middle America, citing her lack of farming knowledge, her gender, her urban secularism, and not least her race.

The book does not gloss over this tension. In a feat of empathy, Mockett refuses to simplify the narrative by judging this crew either for their flaws or their virtues. As she befriends the crew, allowing herself to see through their eyes, some of the things that matter to them begin to matter to her. She starts to read the Bible with interest, and to seek out church. She finds herself accepting, even celebrating, killing animals in service of the industry. Whiteness manifests itself in voyeurism toward the other (visiting an Indigenous dance, for example), in the Christian doctrine that God made nature to be under the control of man (something many of the crew members vehemently believe). As she more or less silently absorbs the crew’s words and beliefs, she also questions whether she is too forgiving of these emblems of American masculinity and whiteness: “Has my proximity to white people made me blind? Is there something I cannot see because I loved my father and his people so much?… I try to erase the parts of myself that look out of place so everyone else will feel at ease.”

Throughout the book, Mockett relentlessly questions everything about the people around her and herself, and finds herself in many ways embracing biblical narratives, discovering an understanding for Eric and his crew. She does not neatly reconcile with the self-erasure she must perform with them, but rather accepts—and urges the reader to accept—the loose ends.

“I wonder if… GMOs and farmers’ use of science strikes us as so unnatural that it disrupts what we want our food to be,” Mockett writes. “The natural is what we find more familiar… Food, this thing we put into our bodies, is so elemental that we want it to be ‘pure.’” This is certainly true. The myth of “pure” agriculture ignores the fact that any agriculture is fundamentally a manipulation of land. Whether it’s the small-scale, diversified, certified organic farm of my home or the 7,000-acre wheat swath of Mockett’s, growing food (or commodity crops) uses (and often abuses) soil.

The part of soil health that Mockett explores most deeply is erosion. Soil structure—which mostly refers to aeration and how well it holds together—is of massive concern in most areas with large-scale farming, i.e. vast swaths of flat land, usually planted in monoculture. With a high level of use, any soil will suffer structural damage. Tilling can be a useful way to incorporate fertilizer, ready a field for planting, turn under leftover vegetation after harvest to decompose, and, crucially, disturb weed seeds. But high-till can also mean that the soil becomes dusty and weak. The roots of grasses and grains can help strengthen soil structure through aeration and mutually beneficial soil-root bacteria and mycelium growth. Those roots also hold onto soil, so, when left in place instead of disturbed, erosion decreases. But what to do about the weeds in an untilled field? That’s where Roundup comes in.

The crux of all of these catch-22s for farmers is largely a matter of scale, which itself is a matter of the capitalist scaffolding upon which the global food system is entirely dependent. It’s a complex web of government subsidies, the use of biofuel and animal feed, and priorities dictated by the government officials and corporate businessmen who occupy the same bed, miles from any field. At the same time, no matter what technologies humans employ, farming will always be about climate, terrain, and soil type.

Putting moral judgements on farmers, good or bad, is not useful. American Harvest understands this.

“While I don’t personally know how to reconcile all these issues—locality, variety—into a cohesive worldview, I am fairly certain now of one thing,” Mockett writes. “All discussions of food and agriculture begin with the land.”

On the shores of the state-protected bay where we grew our vegetables, we laid black plastic over a large portion of beds in order to block light from germinating weed seeds. At the end of the season, we pulled up that dirty plastic and rolled it into dusty, ripped-up balls and threw them in a dumpster. We had a compost pile, but instead of using it, we bought certified organic compost in big bags. Compost production is its own labor, making sure it reaches a certain temperature to kill harmful bacteria, and who on a busy farm has time for that? We bagged our greens in plastic, because it’s easier that way, better for longer-term quality of the greens and more convenient for customers. We also used cover crops and living mulch and crop rotation. And there were plenty of gays and women in our fields.

We did a lot of things, and so do all of America’s farmers. Putting moral judgements on farmers, good or bad, is not useful. American Harvest understands this, and succeeds because it puts complexity—of land and people—in the center. 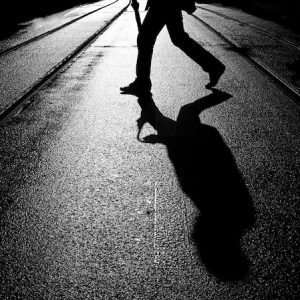 Seventeen years ago, in 2003, when many people had never heard the term sociopath, I began to compose The Sociopath Next...
© LitHub
Back to top