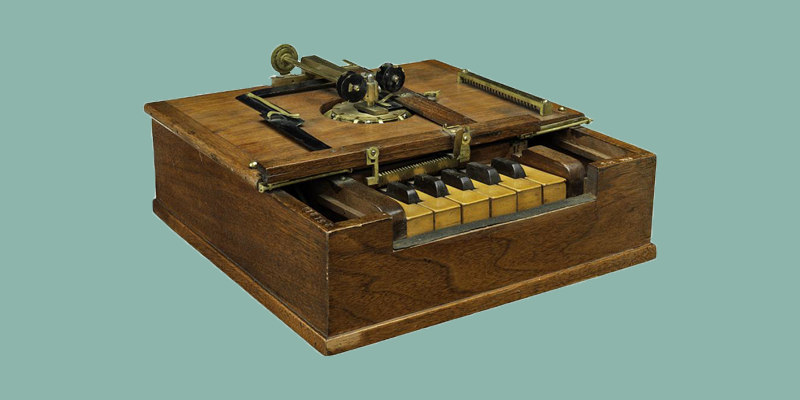 Did you know the first typewriter prototype was made with 11 piano keys?

We never really got over the typewriter. Yes, we have shiny laptops now that weigh less than two pounds apiece, sleek machines that allow you to write as much as you want, that can eradicate your mistakes at the touch of a button. But there’s something about typewriters! Maybe it’s the satisfying clack of the keys, the way you have to put actual, physical weight behind every word you put on the page. Maybe it’s that we so rarely get to use them in every day life that we get genuinely giddy when we stumble upon them. (The original Shakespeare & Co. in Paris has typewriters all over shop, tucked into every nook and cranny, so patrons can leave their mark. You’ll find that they all say KATIE WAS HERE, or some variation of that.)

Typewriters remind us of a simpler time. We appreciate their nostalgia. And I guess the thing we really love about them is that they signify the presence of a Writer. (See: Michael Douglas cranking out a two thousand page second novel in Wonder Boys, Jack Nicholson in The Shining with his, “All work and no play makes Jack a dull boy.”) (See also: Tom Hanks’ deep love of typewriters.)

But how did the typewriter get invented in the first place?

Christopher Latham Sholes had spent his life with words. He was a journalist, working for various papers in Pennsylvania and later, Wisconsin, where his upbringing as a Democrat, his passion for the Free Soil Movement and abolition, led him to politics. Sholes served two terms as a state senator before returning to journalism.

As if that weren’t enough, Sholes dabbled in inventions on the side. (He was a restless Shole, wasn’t he?) In his spare time, he and Samuel W. Soulé, a mechanist, developed devices that numbered the pages of blank books. They shared their shop with a third inventor, Carlos Glidden, and the trio used the numbering machine as the basis for a personal lettering machine, now known as the typewriter.

Here’s how it works: when you strike a key, a tiny hammer that’s attached to a lettered type is pushed through a circular brass disk. The disk guides the type to a point where it hits the ink ribbon. The paper is set in a frame above this and slides from left to right when you hit the correct key.

In their original patent application, the diagram showed 21 keys, but the prototype they submitted held only 11. (Inventors were required to send scale models along with their applications.) Another fun twist: the keys were originally piano keys. (You know Writers; they make do with what they have.) Still, it worked! The patent for their machine was granted on this day in 1868. Music to our ears!