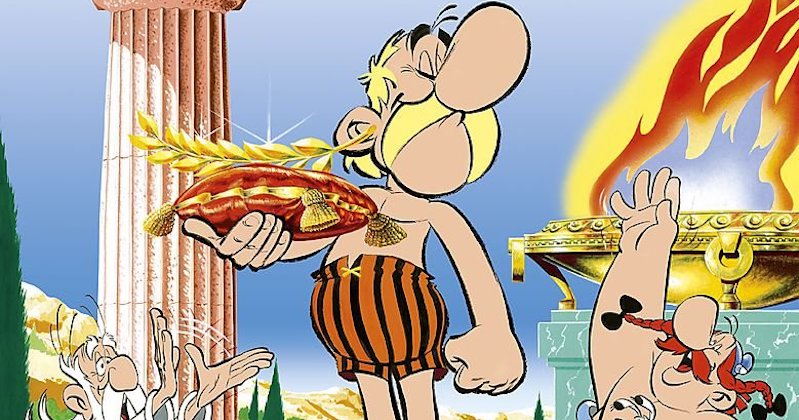 Did you know that they used to give out Olympic medals for literature?

O Sport, pleasure of the Gods, essence of life, you appeared suddenly in the midst of the grey clearing which writhes with the drudgery of modern existence, like the radiant messenger of a past age, when mankind still smiled. And the glimmer of dawn lit up the mountain tops and flecks of light dotted the ground in the gloomy forests.

Are you enjoying the games of the 32nd Olympiad? Have you been seduced by the smorgasbord of (heretofore ignored) obscure sports on offer, from Fencing to Rugby Sevens, Sprint Canoeing to Rhythmic Gymnastics? Are you rising early to watch the trials of Simone Biles? Staying up late to see which frighteningly-muscular teen will rule the pool? Have you, in other words, come down with a terminal case of Olympics Fever (the only cure for which is…well…you know)?

You have? Well, good. That means you may be well disposed toward reading some 100-year-old Olympics trivia. Olympics literary trivia, to be more specific.

It all began (after a few false starts) in 1912, when the impressively-mustachioed International Olympic Committee (IOC) founder, historian, and occasional poet (more on this later) Pierre de Coubertin—who fervently believed that the inclusion of art competitions were crucial to recapturing the essence of the Ancient Olympic Games, writing at the time: “In the high times of Olympia, the fine arts were combined harmoniously with the Olympic Games to create their glory. This is to become reality once again”—finally got his wish. 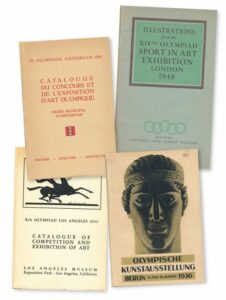 At the 1912 games in Stockholm, gold, silver and bronze medals were handed out in five arts categories: Architecture, Literature, Music, Painting, and Sculpture. All submitted art works had to be original and sports-themed, and, like their more athletic counterparts, the artists participating in the new “Pentathlon of the Muses” were supposed to be amateurs (though the flogging of paintings, sculptures, and epic verse during the games was not uncommon; artists gotta eat, after all).

The 1912 Olympic Arts Competition was little more than a sideshow, with only a few dozen submissions and a handful of awards given out (the very first Literature gold medal was awarded for the poem “Ode to Sport,” submitted by none other than de Coubertin himself under a pair of pseudonyms. Nothing suspect about that judging process, I’m sure…) but as the years rolled on, de Coubertin’s celebration of the arts grew in popularity, adding subcategories and attracting large crowds throughout the games of the 30s and 40s.

Alas, after the 1948 games London, the IOC decided to discontinue the arts competitions—citing concerns about the professionalism of the events—and the dreams of a generation of patriotic poets and painters were quashed.

Now, I know what you’re wondering: did any of the 20th century’s most celebrated authors bag an Olympic medal before they hit the big time? Did Hemingway pen a paean to the pugilistic arts? Did Nabokov make a literary case for butterfly-catching? Did Camus confound the judges with an absurdist goalkeeper’s lament? Maddeningly, since the IOC didn’t maintain records for the arts competition entrants, we may never know the answers to most of these questions. We really only know the names of the podium finishers, and there weren’t any future Nobel laureates amongst them. Which is not to say they all peaked at the games and then shuffled off into obscurity. Some found immortality in other arenas.

Here are three of the most notable Olympic medalists in the literary arts:

Oliver St. John Gogarty: an Irish poet, author, otolaryngologist, athlete, aviator, politician, and infamous prankster who won a bronze medal in the Mixed Literature category at the 1924 Paris games for his poem “Ode pour les Jeux de Tailteann” (which he later described as “rather tripe”). Gogarty had a particularly colorful life, and served as the inspiration for Buck Mulligan in James Joyce’s Ulysses. He also has a Dublin pub named after him—an establishment which serves the most overpriced pints of Guinness in the country, just FYI.

Lauro De Bosis: an Italian poet, aviator, and anti-fascist who won a silver medal in the Dramatic Works category at the Amsterdam games in 1928 for his verse-drama “Icaro,” an anti-fascist allegory disguised as a retelling of the Greek myth. He died in 1931 when his plane disappeared somewhere over the Tyrrhenian Sea. De Bosis had been returning from a flight over Rome, where he had dropped thousands of antifascist leaflets onto the crowded city center from his small wooden plane. Thornton Wilder later dedicated his 1948 novel Ides of March to his memory.

Ernst Weiss: an Austrian physician, WWI veteran, and author of Jewish descent who won a silver medal in the Epic Works category at the 1928 Amsterdam games. After writing Ich, der Augenzeuge (The Eyewitness), a novel based on Hitler’s time being treated for hysterical blindness in a German medical hospital (there were rumors that Weiss gained access to Hitler’s medical file, which had been sent out of the country for safekeeping the future Führer’s psychiatrist). Weiss committed suicide in Paris in 1940, as Nazi troops invaded the city.

We salute you, Olympic literary laureates of yesteryear.