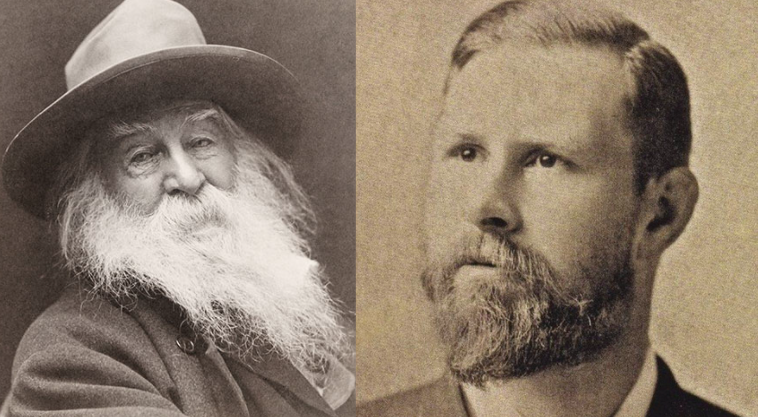 On this day in 1890, perhaps after a nightmare caused by “a too-generous helping of dressed crab at supper,” Bram Stoker began work on Dracula, a novel that would take him seven years to complete. But years before that fateful feast, in an early foray into the literary world, Stoker wrote a 2,000 word fan letter to Walt Whitman.

Stoker first encountered Whitman when, as a student at Trinity College, he read an entertainingly bad review of Poems by Walt Whitman, a selection of the poems from Leaves of Grass. Stoker and his friends read the pan aloud to each other (19th century novelists—they’re just like us!), including, perhaps, this memorable kicker: “It has been said of Mr. Whitman by one of his warmest admirers, ‘He is Democracy.’  We really think he is—in his compositions, at least; being, like it, ignorant, sanguine, noisy, coarse, and chaotic!”

A few years later, though, Stoker got his hands on his own copy of Leaves of Grass, and became a full-fledged Whitman admirer. So much so that in 1872, he wrote Whitman a very intense fan/love letter, which he then held on to for four years, before sending it with a second letter, prefacing the first: “The four years which have elapsed have made me love your work fourfold, and I can truly say that I have ever spoken as your friend.”

“If I were before your face I would like to shake hands with you, for I feel that I would like you,” Stoker writes in the first letter. “I would like to call you Comrade and to talk to you as men who are not poets do not often talk.”

My favorite part of the letter, though, is his frank description of his physical appearance:

I am six feet two inches high and twelve stone weight naked and used to be forty-one or forty-two inches round the chest. I am ugly but strong and determined and have a large bump over my eyebrows. I have a heavy jaw and a big mouth and thick lips—sensitive nostrils—a snubnose and straight hair.

I think sending this kind of letter to a writer today would get you a big ol’ Twitter lecture about the danger parasocial relationships, but Whitman’s response indicates that he didn’t mind.

“My dear young man,—Your letters have been most welcome to me—welcome to me as a Person and then as Author—I don’t know which most.” (Whitman also described his own appearance: “My physique is entirely shatter’d—doubtless permanently—from paralysis and other ailments.”)

The two finally met in 1884, and several more times after, and remained friends until Whitman’s death in 1892.

[via National Endowment for the Humanities, The Marginalian, The Paris Review]