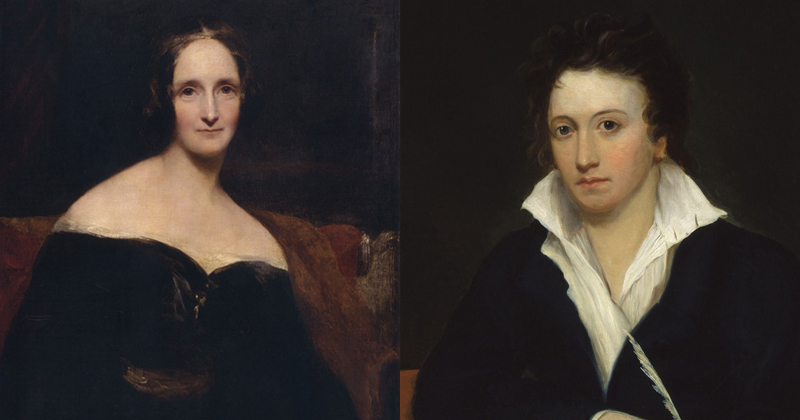 Did Mary Shelley actually lose her virginity to Percy on top of her mother’s grave?

It was Mary Shelley’s birthday yesterday, and to celebrate her, let’s pause for a moment to unpack one of the most frequently-circulated stories about her: that she had sex for the first time on top of her own mother’s grave, with Percy Shelley. As sensational as this might sound, it isn’t entirely apocryphal—it is a longstanding, accepted hypothesis. But there is also a much deeper context for why the teenage writer would have lost her virginity in this location (beyond her possessing a cool morbidity that has crowned her the Internet’s favorite early-nineteenth-century Goth).

The story of this moody consummation actually begins on the night Mary Shelley was born: August 30th, 1797. Mary’s mother, the brilliant nonconformist writer Mary Wollstonecraft, would die from complications following the childbirth. Wollstonecraft had been one of the most important writers of the eighteenth century—her 1792 treatise, A Vindication of the Rights of Women, which argues for the equal education of women and men, is the first English-language feminist text, and because of it, she is considered to be “the aesthetic foremother of feminist expository prose,” to quote literary scholar Susan Gubar. She had already had a three-year-old daughter, Fanny, from a previous affair with an American businessman named Gilbert Imlay.

According to biographer Diane Jacobs, Little Mary, delivered by an esteemed midwife named Mrs. Blankensop from the Westminster Lying-In Hospital, had been born safely and successfully, but four hours after the birth, Wollstonecraft’s placenta still had not been expelled. By now, she was at risk of a fatal hemorrhage, and so Wollstonecraft’s lover (and husband of four months), the celebrated political philosopher William Godwin, summoned Mrs. Blankensop’s colleague, Dr. Poignard, to assist with the extraction. Wollstonecraft’s placenta had not only gotten stuck inside her, but it had also shattered, and Poignard had to remove the pieces, one-by-one, manually. It is understood by historians that he did not wash his hands before this, since this was not the practice at the time, and although he eventually removed all the debris and saved her from hemorrhaging, he also likely introduced bacteria into Wollstonecraft’s body which caused the infection that killed her, eleven days later. Little Mary was raised by her father, understanding that her birth was, somehow, what killed her brilliant, famous, spectacular mother at the young age of thirty-eight.

Mary’s literary career would be spent reckoning with her complicated relationships with both of her parents; in fact, the literary scholar Sandra Gilbert has famously argued that Frankenstein isn’t simply a masculine-focused re-reading of Paradise Lost, as it has long been considered, but a retelling of Mary Shelley’s own origin story, as a monstrous baby who wants to be loved by the parent whose life it has also destroyed.

Mary didn’t simply grow up without a mother, she grew up with a dead mother. These are very different things. She was taken to her mother’s gravestone in the Saint Pancras’ Churchyard at a young age, and since they shared the same first name, Mary learned how to write her name from tracing the engraving on her mother’s headstone. Indeed, as Gilbert writes, her “only real ‘mother’ was a tombstone.” Thus, Wollstonecraft’s grave was the place Mary would turn into her own safe haven. Muriel Spark notes that she lugged her books there, and would read, by herself. Gilbert notes that she fervently re-read her mother’s writings, over and over. Her installation at her mother’s grave seems to have been an attempt to commune with her mind—to learn from her, as much as possible. As Bess Lovejoy notes in JSTOR Daily, Mary would especially spend time there when her father wound up marrying their annoying next-door neighbor Mary Jane Clairmont in December of 1801, when she was four years old. It was her private, peaceful place. And it was the place where, many years later, she brought the poet Percy Shelley when she wanted to declare her love for him.

Percy Shelley met Mary Godwin in 1812. He was nineteen, she was fourteen. He was a great admirer of Mary’s father’s work, and joined the family for dinner. The two didn’t meet again for two more years, when Mary was sixteen, Percy was twenty-one and by now married to another sixteen-year-old girl named Harriet, with whom he already had a child. It didn’t matter. Mary was completely enchanted by Percy, the literary world’s up-and-coming bad boy—some of whose poetic compositions were rejected for publication for being too edgy. He was a big spender, and a big believer in free love (excuse me while I roll my eyes forever). Mary’s stepmother had been leery of him; according to biographer William St. Clair, she believed that Percy had been flirty with all three young women in their home: Mary, her half-sister Fanny, and their stepsister Claire “Jane” Clairmont, who was only eight months younger than Mary. She believed all three girls had fallen for the handsome poet, whom his good friend Thomas Jefferson Hogg famously claimed looked “wild, intellectual, unearthly.”

But Percy and Mary would often sneak off together, taking secret walks. They frequently walked through the churchyard, and read together in Mary’s favorite place. On Sunday, June 26th of that same year, Mary Godwin took Percy to the cemetery again. She told him that she loved him first, and he immediately reciprocated. It seems that they did have sex shorty thereafter, since the following day, in Percy’s own journals, he wrote that a fantastic thing happened that made him consider that day his new, real “birthday.”

Scholars believe that they did have sex for the first time in this place (with Mary’s biographer Martin Garrettt acknowledging the long-held “tradition” of this assumption), since the grave was the location for much of their courtship. Indeed, as Gilbert notes, it was the place for most of Mary’s emotional activity: “reading, writing, or love-making.” But, as Lovejoy notes in her article, it was hardly a macabre setting for them: “the cemetery was not merely a repository of rotting corpses, but a site of knowledge and connection: It was a place where she read to deepen her literary education and her communion with her mother, and a place where she was inducted into mysteries of sexuality. Literary, familial, and carnal knowledge were all bound together in one place.” After all, it wasn’t only Mary Wollstonecraft’s burying ground, but it was also the location of her marriage to Godwin, which took place a mere four months before her death. For mother and daughter, and their lovers, this was a place which collapsed disparate observances of the flesh, where abstract bonds could be made real—new lives, and afterlives, beginning, alike.

On 28 July 1814, Percy left his wife Harriet and eloped with Mary, though they didn’t technically wed, since (I’m just going to stress this again) Percy already had a wife. They traveled to France, bringing along Mary’s stepsister Claire Claremont, for some reason. William Godwin, Mary’s father, an anarchist writer who had once condemned marriage as imprisonment, was not pleased with this situation, especially after he learned about Percy’s issues with debt. It seems that Mary had believed her engagement to Percy, and their embracing progressive ideas of free love, would be in line with the radical ideologies held by her own parents, when they had been young. But Godwin grew very distant from his daughter, after she absconded for France, which tortured Mary more.

During their honeymoon, Mary became pregnant, which became relatively joyless after Percy and her stepsister Claire (who went by “Jane”) began to spend a lot of time together, and in all likelihood began an affair. They traveled slowly from Calais across the continent, shaking off the pursuit of Mary’s stepmother, who had attempted to join them and eventually convince them to return home. They didn’t want to go back, but sooner or later, they ran out of money. And when Mary wrote to her father to ask for assistance, she was dismayed when he flatly refused to help.

When they returned to England, they learned that Percy’s wife Harriet had given birth to a son. But in February of the following year, 1815, Mary herself gave birth to a little girl, two-months premature. She was dead by the beginning of March, and this plummeted Mary into a deep depression. According to St. Clair, she was haunted by the specter of her dead baby. But when Percy’s received a large inheritance that summer, from a dead relative, he took their whole coterie to Bishopsgate, to rest. It’s unknown how she spent that time (her journal from this period has been lost), but in January of 1816, Mary gave birth to a boy, whom she named William, after her father. That summer, the group all traveled to Geneva, where they convened with Percy’s friend Lord Byron (who had by now gotten Jane pregnant), John William Polidori and others. This is the famously rainy, unpleasant summer where the group, stuck inside too long, began to tell ghost stories, and where Mary would begin to write the story that would become Frankenstein. Evidently, Mary was tormented by her lack of ideas, frustrated that every night she had not come up with a story to tell the crowd. But then she had an idea, for a story about a body that could come back to life (makes a lot of sense, given the amount of time spent with her mother’s corpse, doesn’t it?). According to biographer Emily Sunstein, this was the moment she, the eighteen-year-old Shelley, felt herself “first [step] out from childhood into life.”

The inspired Mary and her company returned to England in September, but they could not have imagined the heartbreak that would meet them there. In October of 1816, Mary recieved several terrifying letters from her half-sister Fanny (who had always been left at home during these adventures) expressing suicidal intent, which sent Percy on a quest to try to find her before something dreadful happened. He was unsuccessful, and the following day, Fanny’s body was found in a hotel room in Swansea, Wales, next to a suicide note and a bottle of laudanum. Two months later, Percy’s wife Harriet was also found dead of suicide, drowned in the Serpentine, a lake in London’s Hyde Park. Her family prevented Percy and Mary from taking custody of his two children. His counsel suggested to him that he might present as a more viable guardian of the children if he had a more responsible domestic arrangement, so he proposed to Mary, who was pregnant, again.

They finally got married on December 30th, 1816, two and a half years after they first announced their love for one another in the shadow of Mary Wollstonecraft’s grave.