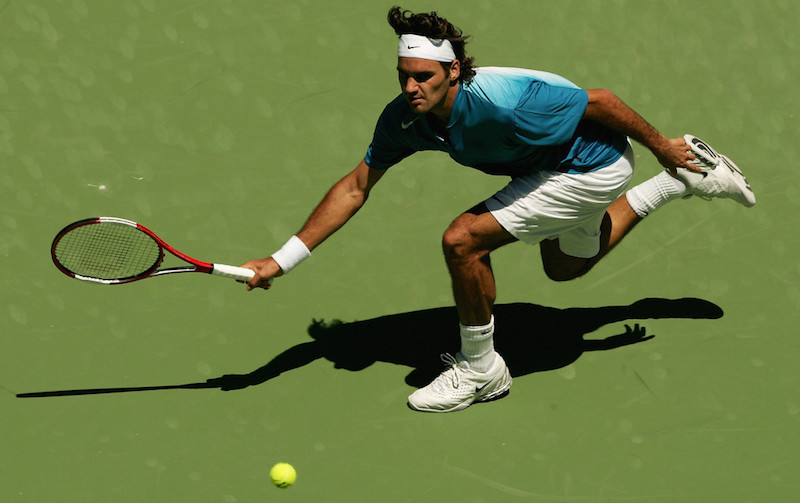 David Foster Wallace’s 2006 profile of Roger Federer is a canonical piece of sportswriting, and will likely remain so (though maybe with an asterisk) despite Jeremy Gordon’s recent observation in The Outline that DFW seems to have conjured Roger Federer’s sublime wrongfooted forehand against Andre Agassi in the 2005 US Open final. Here’s how Wallace wrote it in the original profile:

…suddenly Agassi hits a hard heavy cross-court backhand that pulls Federer way out wide to his ad (=left) side, and Federer gets to it but slices the stretch backhand short, a couple feet past the service line, which of course is the sort of thing Agassi dines out on, and as Federer’s scrambling to reverse and get back to center, Agassi’s moving in to take the short ball on the rise, and he smacks it hard right back into the same ad corner, trying to wrong-foot Federer, which in fact he does—Federer’s still near the corner but running toward the centerline, and the ball’s heading to a point behind him now, where he just was, and there’s no time to turn his body around, and Agassi’s following the shot in to the net at an angle from the backhand side…and what Federer now does is somehow instantly reverse thrust and sort of skip backward three or four steps, impossibly fast, to hit a forehand out of his backhand corner, all his weight moving backward, and the forehand is a topspin screamer down the line past Agassi at net, who lunges for it but the ball’s past him, and it flies straight down the sideline and lands exactly in the deuce corner of Agassi’s side, a winner—Federer’s still dancing backward as it lands.

And here’s Gordon after watching the closest thing to the above a bunch of times on YouTube (you can watch below):

After spending a chunk of time rewinding through the match’s final set, I stumbled across the closest thing that fit Wallace’s criteria […] You can watch the point for yourself, and conclude that it bears only a passing resemblance to what Wallace describes.

So, does it matter that the shot didn’t really happen as written? Yes, it does. Wallace comes as close in this essay as any other writer has to channeling our obsessive collective reverence for sporting divinity—our distance from it, our genuflections to it—so this misremembering feels like the disharmonious twang of a broken racquet string. Did he make it up? Probably not. Someone who understood tennis like Wallace wouldn’t have needed to fabricate a moment of Federine genius—they were always there, timeslips of grace and strength—but for any true believer faith falls easily like a veil over the world, and things—marvelous things—appear, even if they aren’t really there.