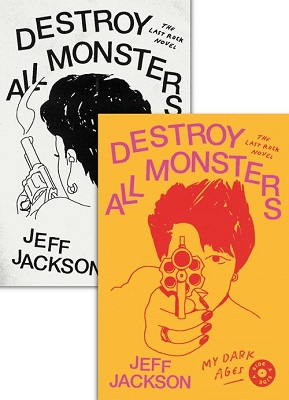 The following is from Jeff Jackson's novel, Destroy All Monsters. Through a narrative entwined with rock and roll, the novel explores an epidemic of violence in which musicians are murdered mid-set by members of their audience. Jeff Jackson's writing has appeared in Guernica, Vice, and The Collagist. His novel Mira Corpora was a finalist for the Los Angeles Times Book Prize.

The hallways of the Bunker are silent except for the fibrillating pulse of the overhead fluorescent lights.

Florian leads the procession to recover his amp, refusing to appear unsettled by the mission. The overcast sky presses down as they walk through the half-abandoned industrial park. They make their way up the hill to the theater, past the tire warehouse with its soaring towers of steel-belt radials, the perpetually shuttered art galley advertising open studios, the sheet metal storage facility with the half-finished mural of a herd of deer, their lower halves nothing more than outlines, as if they’re emerging from the bricks. Hands in pockets, the band leans their faces into the lashing wind. Everyone maintains his own brand of silence. Florian can feel the others psyching themselves up for the burglary. Their movements have become more skulking. Hyperaware of every sound. The slide of sweaty feet in sneakers. The ragged inhalations of breath. The asphalt road feels like an extension of the Bunker, part of the same circuit of wounds.

They pause at the railroad tracks. Florian used to hang out here with Shaun, pressing their ears to the metal lines, listening for oncoming trains. The soles of his sneakers register a distinct tremor relayed through the rail. Something is approaching, but he can’t see any locomotive, not even the slightest shimmer on the horizon. Florian can’t remember how long it’s been since their games of chicken, seeing who could hold his ground long enough to make the engineer pull the emergency brake.

Shaun always won. No matter how many times I tried,

I could never match his nerve.

“Everyone maintains his own brand of silence. Florian can feel the others psyching themselves up for the burglary. Their movements have become more skulking. Hyperaware of every sound. The slide of sweaty feet in sneakers. The ragged inhalations of breath. The asphalt road feels like an extension of the Bunker, part of the same circuit of wounds.”

Randy whistles one of the band’s tunes. Derek D.joins him with a harmony so brutally off-key even Eddie winces. A gust of wind shreds the song into rasping shrills and gasping tatters. As they crest the hill, the theater rises into view, emerging a few steps at a time. It looms like a beacon at the edge of downtown. The sight makes Florian’s stomach churn. He tries to spit, but a squall knocks the saliva straight back into his throat.

Downtown Arcadia used to be well trafficked, but few choose to linger here now. The bodega does steady business selling flowers for the memorial, but the pizza parlor, the Indian buffet, and the twenty-four-hour coffee shop have permanently shuttered, and the sports bars are little more than darkened shells, desolate rooms with derelict pool tables and soundless televisions, the stools empty except for the staunchest regulars. The cement planters that line the sidewalks are overgrown with rude weeds. Even the trash cans seem forsaken. The band notices the heavy somnambulance that hovers over these blocks, the entire neighborhood suspended in a state of uneasy slumber.

The outside of the theater teems with thick shingles of ivy. The edges of the leaves are curled and blackened. Vines that once marauded across the walls have become limp and sallow; their rotting tendrils lie listlessly against the concrete. The town treats the theater like holy ground, but nobody wants to consider whether the rest of Arcadia is being poisoned by its purity.

Florian scoops up a handful of loose gravel from the street. He slings the rocks at the front of the theater, which remains encased in an intricate architecture of yellow police tape. The others follow suit, raining stones on the façade, pelting the oversize poster that warns this is a crime scene. A preemptive strike against this imposing structure. The band stands under the unlit marquee that’s stripped of every bit of alphabet except remnants of the letter E. They try to determine the current state of the theater, but the windows are scabbed over with multicolor band posters, illustrated concert schedules, official venue announcements. Strata from an antediluvian era.

A patrol car rolls slowly past the theater. An officer glares at the band, which has swiftly adopted the pose of pilgrims here to pay respects. They pretend to be so absorbed by the shrine that they’re oblivious to the authorities. As Florian combs through the latest contributions, he finds himself genuinely overcome by a photograph of Shaun with his long hair obscuring his face. In it, Shaun displays the same V-shaped gesture with each hand—the one closest to the camera extends the peace sign while the other offers the two-finger salute. This characteristic bit of mischievousness now scans as a more conflicted and complicated gesture. An unexpectedly profound portrait. The band stands before the image for several long moments, breath caged, throats dry. None of them notice when the cop rounds the corner.

The most conspicuous additions to the shrine are the folded sheets of paper left by fans. Most are scrawled with snatches of song lyrics. They were just another local band while Shaun was alive, but death has conferred an unlikely aura of importance upon them. Florian is amazed how Shaun’s music suddenly radiates meaning for these strangers, their handwritten notes tucked in the crevices like prayers. In the corner, he glimpses the cover of the cassette he contributed to the shrine. Somehow, among this entire expanse of offerings, it’s the only flash of violet.

Shaun was always obsessed with that color.

The only time Florian has seen this many mementos was at his mother’s grave. The mound of remembrances that ringed her headstone in the old family cemetery. She still glides through his dreams, her pockets leaking birdseed, singing the same three notes in a halting rhythm, and he keeps forgetting she’s gone, believing for a few tangible moments each morning he’s waking into an unbroken world.

Whiskey bottles line the shrine’s perimeter like sentinels. Shaun’s favorite drink. One bottle miraculously remains half full. An inviting tide of burnished amber. Perfect to fortify them for their task. Randy hoists the bottle and proposes they each take a swig.

– To the departed, he says. He and Derek D. each take a healthy hit off the bottle.

Eddie refuses and waves it off. This whole thing is a bad idea, he says.

Last is Florian. His hands clamp the bottle like he’s about to smash it, then he takes a longer throat-searing swallow than anybody else.

From Destroy All Monsters. Used with permission of FSG Originals. Copyright © 2018 by Jeff Jackson.

Two Cartoonists Sit On a Bench and Talk: An Illustrated Interview 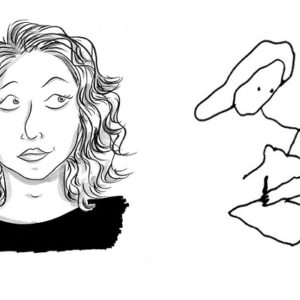 Two Cartoonists Sit On a Bench and Talk: An Illustrated Interview
© LitHub
Back to top