Traveling the Hidden Paths of History

A desire line is an earthen path etched by repeated footfalls. It is an improvised course that is the most direct means of getting from one point to another. In the absence of a constructed pathway, humans make a way. Paved paths are planned; desire lines just happen. Viewed from above, well-worn desire lines look like narrow erasures on the green landscape. When a trailblazer ignores a sidewalk to assert a more direct route, the resulting trampled grass becomes a strip of packed bare earth as others are drawn to the most efficient way to reach a destination.

Desire lines can be ancestral. “Many streets in old cities began as desire lines which evolved over the decades or centuries.” Ancient paths also ramble through our history in symbolic ways traversing land and sea.

Jesus brought the first Africans to the 13 colonies as cargo. Jesus was a German-built ship, purchased by the British king Henry VIII for his navy, inherited by Queen Elizabeth I, who partnered with a slaver, who pirated a Portuguese ship at sea, stole its captive Angolans and sold them in Jamestown, Virginia. The year was 1619, 12 years after the founding of Jamestown, the oldest settlement in the colonies. British blue bloods established the Royal Adventurers Company, and the plundering of the African continent brought such great wealth to the queen that she knighted Jesus’s captain and rewarded him with a coat of arms depicting a captive African bound with rope.

Desire was the first American-built slave ship. She was constructed and armed in Marblehead, Massachusetts, her belly outfitted with leg irons, bars, and racks. In 1637, a year after the founding of Harvard University, 17 years after the landing of the Pilgrims at Plymouth Rock, Desire set sail for the British West Indies, and returned seven months later with cotton, tobacco, and enslaved Africans who labored on Caribbean plantations. The Africans were quickly bought up by enterprising Massachusetts citizens.

A philosopher writes, “In reality, history is the history of desire.” A historian writes that naming their first slave ship Desire was “symbolic of New England’s desire to make money as transporters of slaves into the various North American and Caribbean colonies.” Other slave ships carried equally revealing names, such as Royal Fortune and Treasurer. Some investors paved over their material objectives, crisscrossing sea lanes in ships that bore hallowed names like Grace of God, Angel, and Lord.

Desire lines are simultaneously creative and destructive. Conservationists warn that desire lines, also known as social trails, can be detrimental to ecology and habitat, causing erosion and scarring of the landscape.

Desire did not make her maiden voyage with an empty belly. She sailed from New England to the West Indies laden with dried fish, Boston rum, and Pequot Indians. The Massachusetts and Connecticut militias slaughtered great numbers of Pequots. Of those who survived, many of the women and children were enslaved in New England, but some of them were transported to the British West Indies as slaves. Thus it was Native Americans rather than Africans who were the first cargo on the first American-built slave ship. A trail was blazed. Desire went on to make many more human-swapping voyages, altering the landscape with every crossing.

Soon after Desire’s first voyage, Massachusetts etched slavery into its legal code—the Body of Liberties. Rhode Island’s founder, Roger Williams, who also established the first Baptist Church in the colonies, referred to the Pequots as “Adam’s degenerate seed.” The New Englanders declared the Pequots extinct, banned their language and even forbade the speaking aloud of the name Pequot. As the numbers of Native Americans declined, the population of Africans in the New World soared. The path to wealth and devastation between Africa and the embryonic nation of America came to be called the Middle Passage.

The act of creating a desire line is sometimes called wayfinding.

New Orleans, where I live, boasts of a historic 9th Ward street named Desire. Some of our wayfinding historians romanticize the covetous name, Frenchifying it, beating a watery route over oceans to link the name to the Old World. Lovelorn lore claimed that Napoleon Bonaparte pursued a woman called Desiree Clary who rejected him and married the future King of Sweden. The name Desiree means “much desired”—the perfect complement for a compelling love story. In reality, Desire Street was named for a different woman. It was carved out of an antebellum plantation in the 19th century, plowing its way through the large landholding of a wealthy New Orleans man. He named the street after his daughter, Desiree de Montreuil who was born in 1790.

My family history is fragmented, but I know that some of my ancestors arrived on this continent by slave ship. Half a century after the Civil War, my grandfather, John Guillory, Sr., purchased farmland on a rural road in Opelousas, Louisiana. A former sharecropper, he went on to earn a living growing cotton for market, raising subsistence crops and livestock for his family, and working at a sawmill. Other Guillorys lived on the same road, and in the 1990s when the city proposed that the roads be given names to replace their prosaic Parish numbers, my uncle, John Guillory, Jr., suggested Guillory Road. To his great disappointment, the city fathers and mothers were not persuaded. A Guillory Road, they explained, already existed outside Opelousas, but within the Parish boundaries. Apparently, it is possible to have too many Guillorys. The officials soon decided on Desiree Road as the new name, presumably honoring yet another much desired woman.

Architects, landscapers, and city planners study desire lines in order to incorporate them in new designs. A traffic engineer is quoted as saying that desire lines “indicate yearning.”

Learning the name of the age-old phenomenon has brought anonymous people who walked before me into my awareness. I happened upon a path recently when I accompanied a young relative on a mission. My 5th cousin Katie, a high-schooler, had to report to New Orleans Juvenile Court for truancy. The most direct route to the court section was not the bank of plate glass doors that front the government building, but a small entrance at the end of a path that cut across a wide lawn. Within a few footfalls on that path, I realized that I was traversing a desire line, striding across history, albeit on a very small scale. Though the trail was covered with gray cement pavers, I was certain it had begun its life as a desire line. The lawn that it bisected was squared off by professionally poured sidewalks. Clearly, this snaky line of pavers, this three-foot-wide afterthought, disguised an earthen path that was born of the yearnings of multitudes of juveniles summoned to court over the years. Apparently, someone had decreed that the unsightly bare dirt be covered over with unsightly cement pavers, resulting in a configuration that did not match its surroundings. I hesitate to call the makeshift walkway a blot on the landscape; the complex of aging, graying government buildings is itself somewhat of a blot. Yet, the path becomes the most appealing part of the landscape when I look at it as a display of human resourcefulness.

Meanderthals are individuals who create desire lines within an established path in order to change direction: “Secondary desire paths adopted by those who are suddenly diverted from their trajectories are, indeed, not aimless but forced re-adjustments.”

Past the midway point on the juvenile court path, a fresh desire line appears—a naked one. The roots of a large oak tree have disrupted the pavers so that their threatening edges poke up to create a walking hazard for juveniles and their advocates. Inert concrete is no match for live oak roots. By repeatedly stepping around the hazard, walkers have created a crescent-shaped desire line beside the problem—a short deviation of a few feet leading right back to the paved path. I hope my little truant cousin Katie will likewise find her way back from trouble.

Every explorer on the World Wide Web is a potential meanderthal, free to create her own journey. While stalking ancestors on the internet one evening—visiting genealogy sites, checking message boards—I made a sharp turn at Ancestry.com and tripped over something unexpected. The surname Guillory means “powerful desire,” combining the Germanic words wil (desire), and ric (power.)

Desire lines are “never perfectly straight. Instead, like a river, they meander this way and that, as if to prove that desire itself isn’t linear and… straightforward.”

Uncle John lived to see the renaming of the road that led to his house, but not being an internet meanderthal, he likely had no awareness of how closely the new name approximated his desire. Guillory of the “powerful desire,” is not the same as Desiree the “much desired,” but it’s close— like a mirror image in a way, or like subject and object. Opelousas officials committed an inadvertent synchronicitous act. Had Uncle John known about the hidden meaning of his name, he would have smiled, and maybe even winked. So would our ancestors. 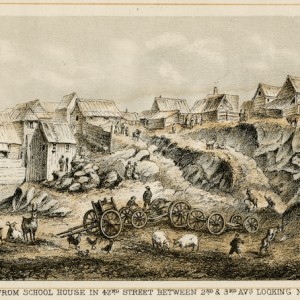 Noon in Barcelona, hours of reading. In Lettrines, Julien Gracq attacks contemporary architecture for having eliminated attics...
© LitHub
Back to top