“It is usually conceded that common sense should regulate the furnishing of the den.”

Cozy rooms are a magnet, drawing us toward them to burrow in. The library, the den, and, in their day, the smoking room were subjects of interest to Edith Wharton and Ogden Codman—the architect and interior decorator with whom she wrote The Decoration of Houses—because they are retreats that provide a respite from the more public areas of a house. Family takes precedence in a room focused on both intimate interactions and reflective time, like reading. In this room alone, the authors were especially willing to put comfort ahead of beauty. 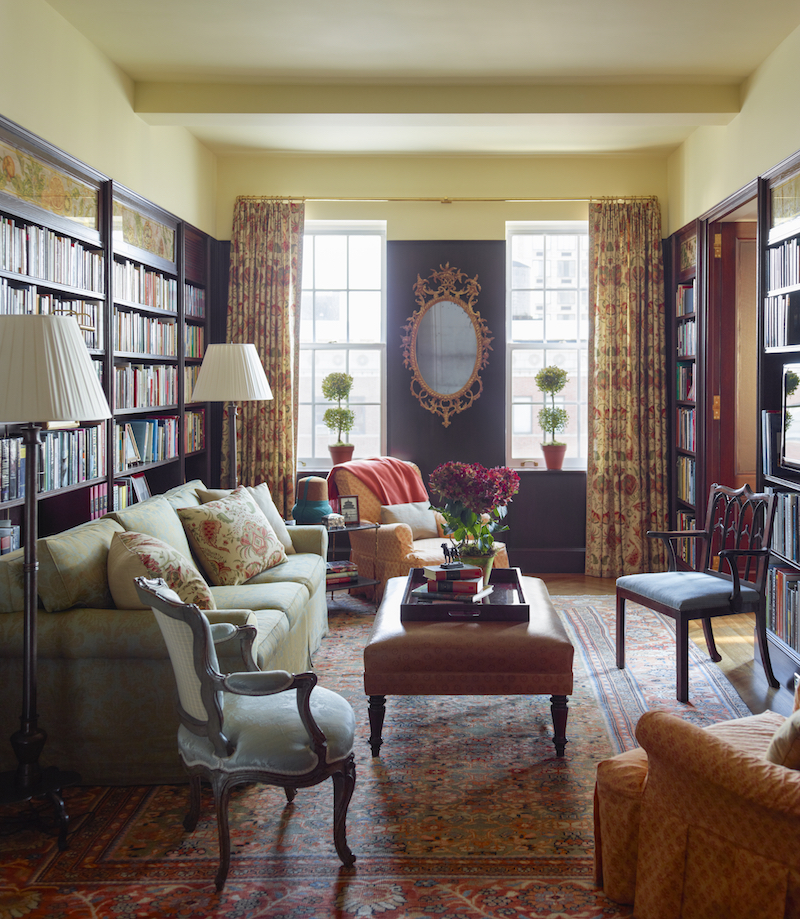 Wharton and Codman espoused the architectural beauty of built-in bookcases. In this New York City apartment, bookcases sit beneath the structure of a twentieth-century ceiling with a Comice above a frieze of églomisé panels.

The den or family room—people use different terms for this kind of masculine, durable room—might be adjunct to a more refined living room, or follow it in sequence in a well-designed plan, but it’s a distinct space that has its own special qualities. It fits into a rhythm of rooms and creates a sense of balance in a house.

In the 1890s, there was an acceptance that dens were ugly, since they were spaces for men—the “man caves” of their day. The archetypal masculine den has wood paneling, and the landmark furniture piece is the club chair, which developed in men’s clubs, designed to relaxingly fit a man in both pitch and scale. It’s impossible to make this kind of room without comfortable places to sit, and the club chair is still relevant today. 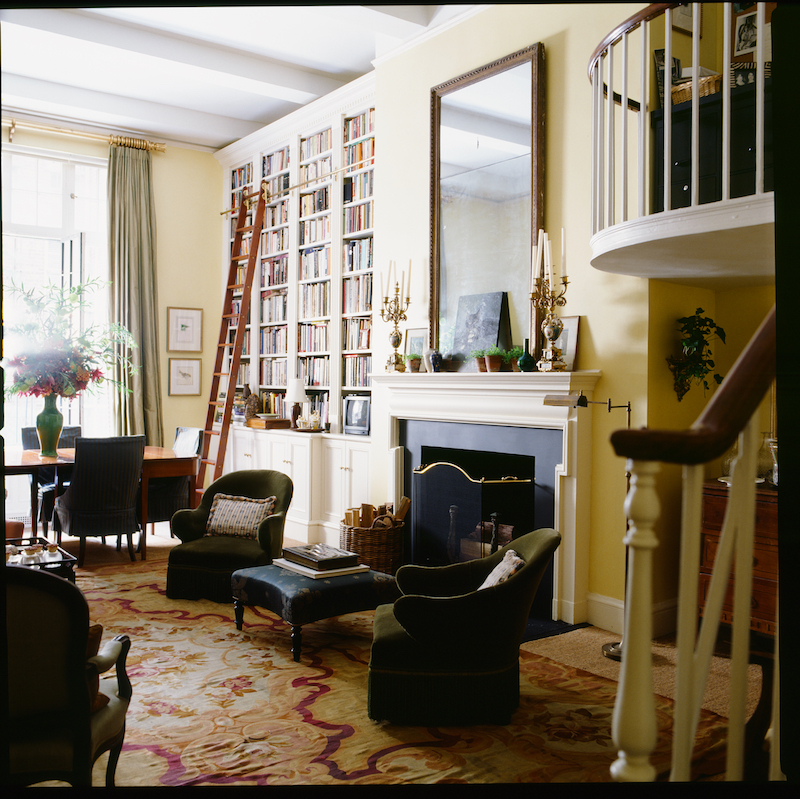 With its combination of books and comfortable seating—especially the leather Chesterfield sofa—this Philadelphia library is the type of durably decorated room that Wharton and Codman suggested for men.

Dens don’t have to be dark and ponderous; they can be light and airy if we so choose. Sometimes a lighter spirit is welcoming, and it can be equally relaxing. Wharton and Codman advocate for an uncluttered space, and when it comes to the surfaces, I agree they should be simple. I think you can deck the walls in a den, from trophies to diplomas and awards, creating a more personal effect as opposed to the reserve required in a dining room or living room. I find that a bulletin board, packed with personality and the bustling evidence of family life, sets a warm tone. These seemingly random items on display may only have meaning to family members. 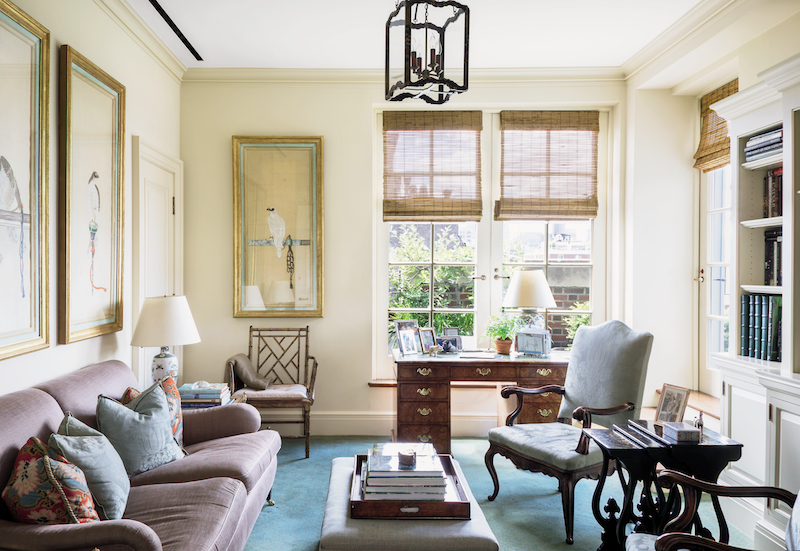 Another liberating aspect to these rooms is the range of decorating material available to us today: the twentieth century has brought us a new freedom to use long-lasting and versatile tools (who knew that polyester could be slyly and deftly employed to make beautiful fabrics?), and we don’t have to rely on just leather and tweedy upholstery. The hard use that a den can and should receive—a pizza party or watching the game—is easily possible now.

I think of a house we designed in Greenwich, Connecticut. We covered the sofa in the den with indestructible white canvas, and six years later, no amount of grape juice spills has marred it. Just as with other rooms of the house, a work of art adds a personalizing aspect—the Greenwich house has a beautiful landscape painting in the den. But alongside it are children’s drawings, a piece of sculpture by a famous artist, and a series of family photographs. 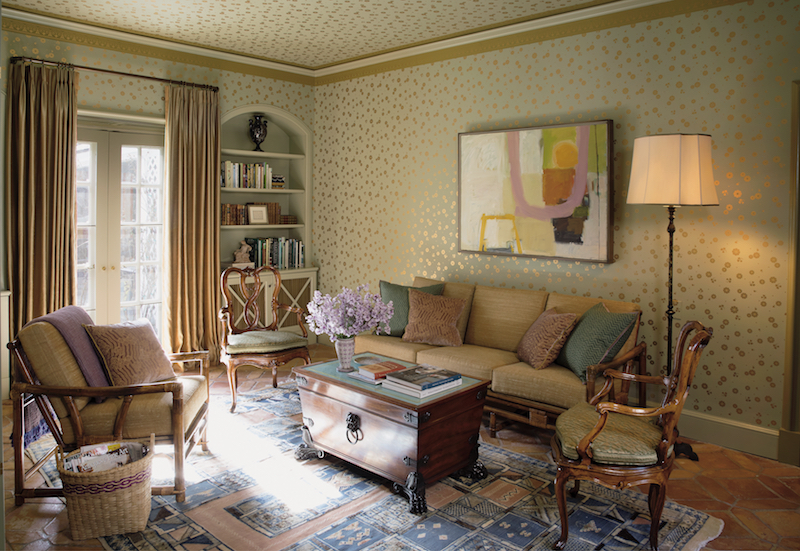 The library at Balderbrae is another example of an informal sitting room. In this case, the informality is accentuated by the mix of 18th-century Italian chairs and twentieth-century rattan. The use of wallpaper, especially on the ceiling, would appall our authors. In their opinion, papers had plagued the interiors of their own era.

Works on paper are especially appropriate in a library, usually a smaller space that allows for close inspection. Sometimes one enters a so-called library, but there are no books present. That seems soulless to me. Certainly Wharton, acknowledged as one of our greatest novelists, was alive to their special role in a house, and she professed her admiration in a paean that stretches over some five pages.

Decoration provides a deep dive into the history of books in decor, particularly the development of bindings, which allowed volumes to be stood up straight rather than laid on their sides. That game-changing development led to the advent of built-in bookshelves against walls, something of which Wharton and Codman very much approved—naturally, since shelves are functional architecture.

Built-ins are “not only the most practical, but the most decorative, way of housing any collection of books large enough to be so employed. To adorn the walls of a library, and then conceal their ornamentation by expensive bookcases, is a waste, or rather a misapplication, of effects—always a sin against aesthetic principles.”

They note that France tended toward built-in bookcases, with America and England favoring freestanding ones. Though I admire the former—and we often paint their interiors to add an element of interest—I find that an antique bookcase adds monumental style. And as a furniture form that is undervalued, a beautiful example is often affordable.

A classic 19th-century trope is to have low bookcases—marginally higher than a chair rail, wainscot or dado frieze—with art hung above it. Wharton and Codman viewed that orientation tepidly, finding it awkward, but I admire it because of the opportunity to hang paintings and to place decorative objects on top. 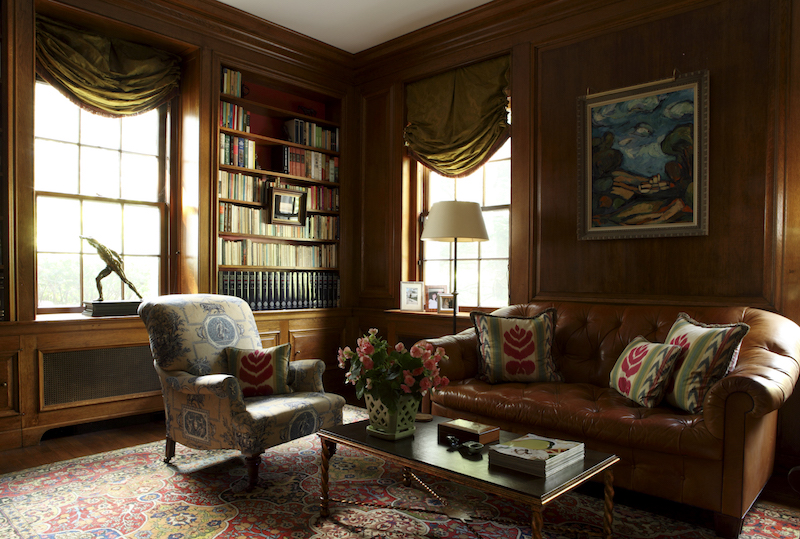 The library at Land’s End, Wharton’s Newport Cottage, featured the low bookcases that she and Codman cautioned against in The Decoration of Houses. However, we occasionally use them as they offer an embracing visual weight to a room and allow for the display of objects and paintings above the books. We retained this example built for a low-ceilinged room in the 1920s.

But beyond the particulars of their arrangement, being surrounded by narratives is enriching. Stories inspire. It’s not about having books in the library to show you’re cultivated, as it once was. We all appreciate historical libraries, with their handsome bindings, and these can provide a sense of rhythm to a room. But for clients who are not bibliophiles, but instead just like to read, I’d rather see contemporary books that reflect their interests, from paperbacks to glossy coffee-table examples.

The owners of the Montana lodge are a family of readers. Furnishing their rooms with books and bookcases with volumes they read and knew transported the spaces and made them memorable. Ironically, the written word also encourages the spoken word; books have sound-deadening properties, making conversation much easier. That’s why libraries are often places for heartfelt exchanges, especially in our own age, when peace and quiet is ever rarer. 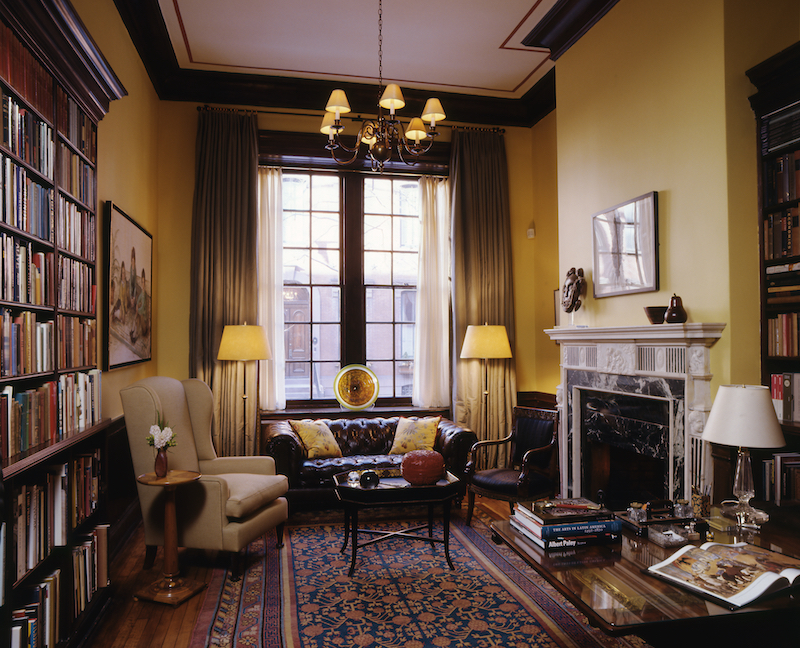 In our New York City loft, we have some five thousand books; my husband collects American cookbooks from the eighteenth century to the present. When we moved in, there were no architectural features. It was a drywall box. Books have provided rhythm and architecture to define the space, and we are surrounded by a world that Rick is passionate about. We use the whole vocabulary of bookcase there: built-ins, half-height shelves in the living room, and an old-style freestanding case. It’s certainly proof that books don’t have to be corralled just in the library. 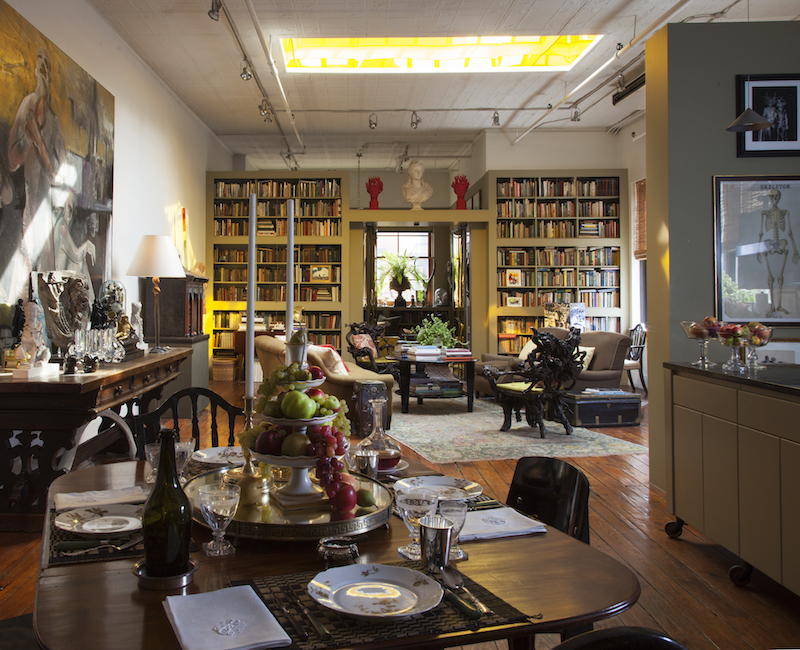 The open kitchen, dining, and living room in our loft.

As we get more enmeshed in the digital age, we realize that books provide a function and a solace that other media cannot, and they create a dignified setting that implies and encourages culture and learning. Full of characters, the presence of books adds character certainly to the library, but to other rooms as well. 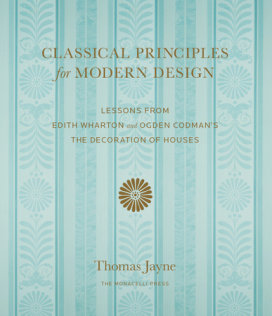 This is an excerpt from Classical Principles for Modern Design: Lessons from Edith Wharton and Ogden Codman’s The Decoration of Houses by Thomas Jayne, published by The Monacelli Press, 2018. Reprinted here with permission of the publisher.

AD100 designer Thomas Jayne is founder and principal of Jayne Design Studio. His interiors reflect his passion and wide-ranging knowledge of classical traditions and his quest to further those traditions within contemporary design. Jayne holds a master's degree in American decorative arts from Winterthur and completed fellowships at the American Wing of the Metropolitan Museum of Art and the J. Paul Getty Museum. He is the author of the highly successful The Finest Rooms in America: Fifty Influential Interiors from the Eighteenth Century to the Present and American Decoration: A Sense of Place, a monograph on the work of Jayne Design Studio.
Share: 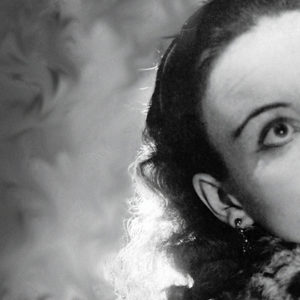 Barbara Comyns, Outsider Artist In the 2005 movie Junebug, Madeline, a Chicago art dealer travels to her husband’s home in rural North Carolina to secure...
© LitHub
Back to top
Loading Comments...