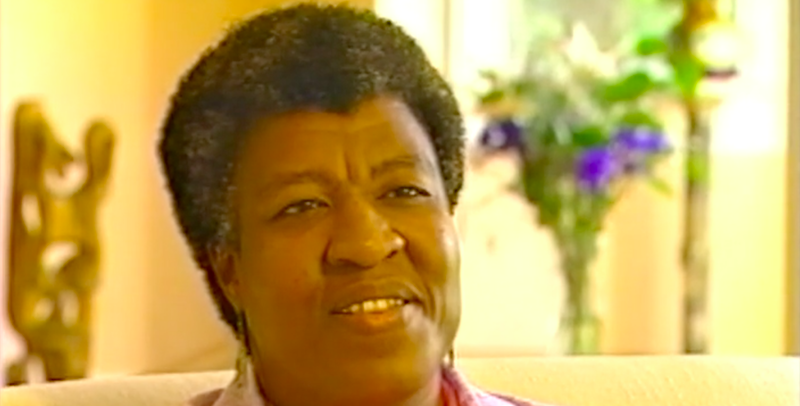 In 1995, Digital Diaspora, a organization based in the UK, hosted “40 Acres and a Microchip,” a conference that gathered Black writers and intellectuals to discuss the future of digital technology. Octavia Butler, who would have turned 73 this week, spoke with filmmaker Julie Dash for the conference about her beginnings as a writer, why genre labels don’t matter to her, and confronting discomfort in readers when fiction hits too close to home. (Watch the full interview here.)

On what made her become a writer:

“It’s either a disease or an addiction, I’m not sure which.”

“I hate writing short stories, because it looks so easy and it turns out to be so difficult. And that’s kind of how I began as a writer, writing short stories that I thought would be really easy and that turned out to be really difficult, and then trying to sell them when I was about 13. I was beginning to try to sell things, sending them off to magazines and bothering editors and getting them back by return mail, which is a writer’s rite of passage, but I didn’t know it at the time.”

“The marketing people decide what to call it. I find it a really tiresome argument, always to be arguing, “is it fantasy, is it science fiction, is it speculative fiction?” … I’ve noticed that if it’s completely an impossible fantasy, people are much more receptive to it. They’re much happier to see all sorts of odd things that couldn’t be than they are to see some sort of machine that’s a little bit advanced and could be. As to what I call myself, I call myself a writer.”

“Right now I see a fairly grim future. In my book Parable of the Sower, I wrote that thinking about the future, thinking about the things that we’re doing now and the kind of future we’re buying for ourselves, if we’re not careful. … In Parable of the Sower, there is an even greater rich-poor gap than we’ve got now, for instance, and the gap does seem to be widening. We have fewer and fewer middle class people because their jobs have gone off to low-wage countries and more and more and more the people there are being abused because they don’t get the protections that we insisted on, and there are more and more poor people and there are the few rich people that are richer than ever. … I wanted to look at the possibilities of global warming, global warming is a kind of character in the book. Right now we’ve got sea level rising, very slowly, but over the past couple of years according to satellite measurements it’s starting to rise faster, increased carbon dioxide over the past century or so, very strange weather—storminess, odd weather—we’ve got a lot of things that we would be expecting if global warming were a fact and not just something still very questionable, but I think it’s going to stay questionable until we can’t ignore or deny it any longer, because nobody really wants to do the kinds of things we would have to do to live with it.”