Again it is late and I am alone, listening to “Annan Water” on repeat. It’s a sad song, about a man trying to cross a river at night to see his love. It does not go well. His love is named Annie. His name we never learn; he could be anyone: the singer, you, me, all of us. The man has ridden a horse to the river’s edge, “over field and fen, o’er moor and moss and many a mire.” But when the mare reaches the water, she stops, and will go no further.

The version I listen to is both the original and not quite. It’s sung by Nic Jones, from his 1970 album Ballads and Songs. He’d found the words for it in the appendix of volume IV of Francis James Child’s collection, The English and Scottish Popular Ballads (1882-1898). The popular ballad in this case was “Rare Willie Drowned in Yarrow,” or “The Water o Gamrie.” But there in the back pages of the old book was yet another form of the story of the man at the water’s edge trying to cross over, and this version was called “Annan Water.” It, too, was taken from somewhere else, an even older book called “Minstrelsy of the Scottish Border,” first published in 1802. “Annan Water”—the version from 18th-century Scottish border minstrels—has fourteen four-line stanzas, more beautiful and less familiar than “Rare Willie” or “Gamrie.” Jones took some of the lines and discarded others, reshaping the stanzas into four eight-line verses. And he wrote a refrain, which he sings after each:

And woe betide you Annan Water,
At nights you are a gloomy river,
And over you I’ll build a bridge
That never more true love may sever.

Jones’s voice on “Annan Water” oscillates between a soft, mournful tone and something stronger, fearful almost. When he sings the words “gloomy river” the river’s waters seem to me to be dark and still, but then as the song goes on and the story unfolds it seems that the man—or Jones, singing as him—grows angrier and angrier at the river and its gloomy waters, which no longer seem so placid. Jones is also playing guitar, but that is it: just his voice and his fingers at the strings.

The tune he plucks comes from something very old as well, which, again, he’s modified. In this case, the song was “The Brisk Young Lively Lad,” collected in Surrey by Lucy Broadwood and published in the Journal of the Folk Song Society, Volume 1, in 1900. “The Brisk Young Lively Lad,” or Jones’s version of it, does not sound brisk or lively at all. The way the strings are plucked play perfectly with his singing, the guitar and Jones’s voice locked in a duet that travels from the edge of the water out across it, from sadness to anger to fear and back again to sadness.

By the third verse the man has asked for a boatman to help him cross, and the river has grown wilder. “The sides are steep, the water’s deep / From bank to brae the water’s pouring.” Then something very strange happens, right at the end of this verse. The perspective shifts, leaving behind the first person for the second person: “And your bonny grey mare she sweats for fear / She stands to hear the water roaring.”

A river is a boundary, the place between places. The Greek River Styx, the Japanese Sanzu, the Norse Gjöll: all rivers that flow between the land of the living and the land of the dead.

The perspective again shifts for the final verse, zooming out into the third person. He tries to swim but does not quite make it, clutching at the far shore’s steep sides, at willow wands and “the bush of briar.” And here, again, another subtle shift, to his true love, to Annie. Jones sings of the willow and the briar, then “For it broke beneath her true love’s hands / When strength did fail and limbs did tire.”

A river is a boundary, the place between places. The Greek River Styx, the Japanese Sanzu, the Norse Gjöll: all rivers that flow between the land of the living and the land of the dead. In Scandinavian folklore there is the myth of the brook horse, or Bäckahästen, which appears beside rivers offering passage across. Once mounted, its riders cannot get off, and the brook horse dashes into the water and under, drowning the rider. There are similar stories in Celtic folklore, of shapeshifters called kelpies, which drown their victims, can take on the form of a horse, and always appear at the water’s edge.

But, even for a song that ends in it, I do not think “Annan Water” is about death. Most of the story is about the attempt to cross the river, and the crossing itself. Two of its verses take place at the riverside—a potent space, where we go for the laying down of burdens and swords and shields. Riversides are the gateways to ritual cleansings, places of rebirth. Two more verses in the song concern the crossing itself: not birth or death but the space in the middle, where we have left behind the person we are and have not quite reached the far shore, becoming the people we soon will be.

Of course what this sad mournful tune is mostly about for me these past six or eight or who knows how many months I’ve been listening to it is the pandemic. Or, more exactly, that feeling that comes over me—again, mainly late at night, when the house is quiet and everyone else is asleep—of the sheer weight of this unseen and flowing thing that has happened and continues happening, the river of virus and all that is associated with this time, that has reshaped our reality and changed who we are.

I keep hearing about how, or when, we will go back to normal, as if there is any going back. This sentiment ignores the lessons of the river, the crossing, and this song: once you enter the waters you will not leave the same. The only thing constant, even in death, is what connects us to one another, which is love. Jones reminds us of this when he sings his chorus one last time, repeating its final line:

Most times, after I finish playing the track, I start it over.

Ryan Bradley is a freelance writer and editor based in Los Angeles. He’s been nominated for a National Magazine Award, won a Los Angeles Press Club award, and had writing featured in The Best American Science and Nature Writing.

Natural Alchemy: On the Long History of Community Gardens in Indianapolis 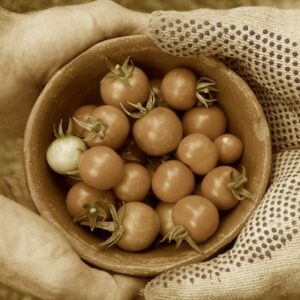 Natural Alchemy: On the Long History of Community Gardens in Indianapolis

“Urban planners and agricultural experts predict that there will be no farmland remaining in [Marion County] by the year...
© LitHub
Back to top