Death and the Poet: Thinking of Whitman at My Husband’s Grave

It’s been 200 years since Whitman’s birth and 15 years since my husband’s death and the two are not connected, other than the fact that Walt’s self-made crypt is down the lane from my husband’s grave.

My husband’s grave. It’s 15 years later and I still don’t know if I did the right thing. We didn’t talk about what we wanted to do with our bodies when we died because we didn’t think we’d die.

Even when he was diagnosed with cancer, even when he lost so much weight, even when each chemo embolism made him lose his gorgeous thick black hair. This period of our lives seemed like it would be a blip on the screen one day, a stage of our lives we’d remember with a shudder.

So when he died I had no idea what he’d want. I had no choice but to do what I thought made the most sense: If I buried him, the kids would have a place to go. If I bought two plots next to each other, the kids could see us both at the same time sometime far far down the road. Don was an environmental technician, a camper, hiked most of the Appalachian trail, Montana, Washington state—fly fishing was his passion.

My brothers-in-law said there’d be nothing available, that Harleigh Cemetery had been “sold out” for at least 50 years. If my husband needed to be buried, he had to be there. Like everything else, my concern was the kids; if they wanted to go there, they should be able to go and Harleigh is a 5-minute car ride or a 25-minute walk. It felt like truly the least I could do to keep him close.

Stubborn as Whitman, I called anyway. Not only was there one grave available, there were two, side-by-side, close to Whitman’s crypt and also less than 100 feet away from the poet Nick Virgilio, under a huge oak tree, on a gentle slope facing a pond—it was almost too much to bear.

What do Whitman and I have in common? Maybe we live the same way: my brother’s death, my first gut-punch of a death, didn’t make me cower in a corner, but instead makes me want to squeeze every second out of every day until the day becomes as breathless as me.

Whitman focused on the construction of the mausoleum, with one of his concerns being that the iron gate at the front swing smoothly through the decades. In contrast, Don had no input on the style of his burial, and I regretted the coffin immediately after I bought it—too ostentatious—not my husband. Yes, it was made of natural oak, but—the brass! The lining!!!

Later, I tried to make up for the coffin by buying a huge boulder for the headstone. I explained what I envisioned to one of his fly-fishing friends and he found a place and one of his fly-fishing friends found a place that would smooth and glaze one side. I’m still happy with the words I chose: Son, Brother, Husband, Father, Friend, and his name. Simple.

Whitman’s grave has thousands of visitors a year. We don’t go to Don’s often enough, though I don’t even know what “often enough” means, exactly. The kids and I are still always stuttering around, bumbling about with ways to mark his death anniversary, his birthday, Father’s Day—is it good or bad that all three of those markers are within a week of each other or is that just another question I’ll never be able to answer? Meanwhile, we’ve had toasts, thrown things in fires, gotten tattoos, and sometimes even had the nerve to pretend it wasn’t happening.

On the fifth anniversary, a family friend who barely left our sides in those early years and my new partner came out on the back steps of our home with helium balloons for us to take to the cemetery. These men were awkward and lovely, stopping us in the driveway with this surprise as we got in the car to go, alone, to the cemetery on a brilliant blue-sky day.

We were meant to each hold a balloon, then say or think of messages for Don—and let go.

Somehow, as we moved to take the balloons, two floated free. We had all been talking at once, my beautiful generous children assuring these men, who had tried so hard to make it okay, that their idea was so great. We all fell silent and watched the balloons drift further and further away.

I remember the hot tears I willed away, my rigid smile, when I remember this moment. I remember looking at everyone’s face, the loves of my life and all in a complicated pain. Someone, I don’t remember who but it was surely one of the kids, said: “Let another one go, too. It will be better if we all hold on to just one.”

Whitman would go on to have his father, mother and siblings exhumed from their graves in New York and moved to his Harleigh Cemetery tomb. But now, I’m not sure I still want to be buried there. Maybe I could have half of me buried there, and the rest cremated—the other half in the ocean, to join my mother, sister and brother.

Is that OK? Should I even make this decision now? If the kids need a marker, I think I’d like just a big freaking rock with no engraving. Wouldn’t that be something—to be silent after all these years of trying to make sense of myself through words? People tell me that I am strong and I don’t tell them that I am devastated; I let them believe their truths; it’s best for all of us.

I always loved “Song of Myself,” but wasn’t a huge devotee of Whitman and never really studied him intensively, though I can sing the “Fame” song all the way through. But these years of always acknowledging Whitman when I go to Harleigh, has made me feel closer somehow, like I have more of a right to him, if that makes any sense. I visit my husband’s site; I blow a kiss toward Walt.

I know this. Don didn’t know he was going to die. I don’t want to, ever. Walt tried to make the best of it.

Part of Verse 52 is inscribed on an onyx marker at the Whitman site:

I depart as air—I shake my white locks at the runaway sun;
I effuse my flesh in eddies, and drift it in lacy jags.
I bequeathe myself to the dirt, to grow from the grass I love;
If you want me again, look for me under your boot-soles.

I’d like to place these last three lines at my husband’s site, though I know I won’t, instead I’ll just recite them in my heart:

Failing to fetch me at first, keep encouraged;
Missing me one place, search another;
I stop somewhere, waiting for you.

Kelly Link's Advice to Debut Authors: Writing is Terrible, Complaining About it Is Fine 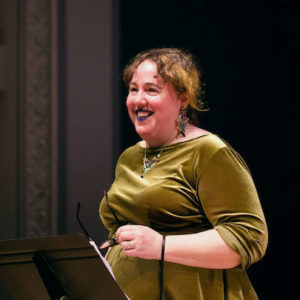 Kelly Link's Advice to Debut Authors: Writing is Terrible, Complaining About it Is Fine

The following is a speech Kelly Link gave at the 2019 One Story Literary Debutante Ball. Thank you to Maribeth and Hannah...
© LitHub
Back to top