Death and the Butterfly 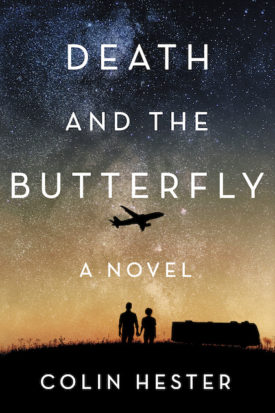 The following is excerpted from Colin Hester's new book, Death and the Butterfly, a multigenerational novel about the intertwined stories of three women. Hester is a Zen student and novelist. His previous novel is Diamond Sutra.

In the spring of 1982, at the age of 31, Polo finally stared down the terror of being a grown-up. He chucked his job as a postman, wooed and courted a young emerald-eyed library student named Julie, and once they’d wed he installed them both in a renovated loft in Toronto’s Beaches. Pleased with how effortless it seemed so far, he sprung for a fine-tailored pinstripe suit, a pair of gray flannel slacks, and a complementary navy blue blazer from The Brick Shirt House, each and all perfect for his new job at Toronto Life magazine hawking advertising space to restaurants. True, selling daunted him at first as he gathered his contacts and assembled a client list. But he reveled in both his sense of freedom and the admittedly hazy and romantic notion that he too was engaged in the free-enterprise adventure. His recently converted neo-Reaganite male friends however deemed it all amusing and gently taunted him that this very same romanticism had prompted him to vote for Olga Dobosh, Marxist-Leninist candidate for the riding of York-Scarborough in the 1974 federal election.

“Along with 160 other dreamers,” he would remind them. “Besides, to paraphrase Karl himself, as a capitalist I’ll be able to sell myself the very rope I hang me with.”

Either way, this same wistful romanticism likely blinded him from all the warning signals. For in fact the economy had begun to falter even before he left the post office. And as interest rates soared past 20 percent during the summer of ’82, the country caved into the pit of the worst recession since the 1930s. In Toronto alone hundreds of businesses went bankrupt every month. Many were restaurants. Polo’s commissions abruptly leveled off then plummeted. When, as the junior rep, he was declared redundant the Friday before Labor Day, all he could do in his shock was wonder out loud to his embarrassed boss why people were always let go on Fridays.

This wistful romanticism likely blinded him from all the warning signals; in fact the economy had begun to falter.

Things worsened. He moped through the classified section all fall, one eye on the painfully thinning want ads, the other on their painfully thinning savings account. Desperate, Polo answered an ad in The Globe and Mail to work for the newspaper’s circulation department. He donned his blazer and gray flannels, single-Windsor’d his red silk necktie beneath his shirt collar, and drove to the newspaper’s district office above a 7-Eleven in Leaside.

“Bloody hell!” the district manager said. “We don’t get many dressed like you.” He boasted forearms as thick as barrels and wore a rubber apron knotted around the girth of an executioner.

“Er, what exactly will I be doing?” Polo asked.

“Four hundred and twenty-seven of the buggers.”

“And 27,” the district manager said. “Delivering’m. Every morning. To the posh shites in Forest Hills.”

Now Polo was a fussy man, and to ease the ordeal of delivering over four hundred newspapers six mornings a week, he quickly transformed it into ritual. He would inch out of bed at 3:45 a.m., shave, nuke some Sanka, pour apple juice instead of milk on his Cheerios, swallow his Vitamin C capsule, kiss Julie silently on the forehead, then scarper across the sleeping city to his eleven bundles of newspapers. To deliver them, he slung two canvas satchels around his shoulders like bandoleers and crammed each equally to the point of bursting.

Thus balanced, he hustled through his route, learning to roll and rubberband each paper without slowing his gait. When it rained or snowed, he slid the rolled-up newspaper cylinders inside special plastic bags, tucking the ends in as fastidiously as an apothecary at his calling. He earned $400 a week for the three grueling hours each morning, and because all his customers were billed quarterly by the newspaper he was spared the hassle of collections. Often he landed back home by seven thirty, his days each his own and in their entirety, hours passed with his books and vinyl—Ulysses and Merle Haggard, The Day of the Jackal and Vivaldi. From a Church Street pawn he ransacked a used video player—a Betamax of course—and on occasion watched his late father’s favorite: Sergio Leone’s Once Upon a Time in the West. But books had always been Polo’s “high Mead,” and browsing the Queen Street used bookstores one day he encountered Robert Aitken’s Taking the Path of Zen. Truth be told, the only bits of “Zen” wisdom Polo had gathered had accrued from the TV beatnik Maynard G. Krebs, but for some God-only-knows reason Polo picked the book up and paged through it: “Cushions,” “The Posture,” “The Legs.” He considered the book’s weight—literally as well as figuratively. “Chapter One: Fundamentals: Accepting the Self.” Hmm, maybe not—at least not today. But before he returned the book to its place Polo chanced a quick look at the dust-jacket photo of the author: the face, with its dark swept-back hair and clear eyes, was in every way a shiver-giver: a distinct and eerie resemblance to his late father—almost too much so. Still, thus did he procession it to the register and thence to home.

Near noon that morning when Julie returned from class, she noticed the book and asked him with a smile, “Finally teaching yourself to sit still?”

“And teaching myself to cook,” he answered.

“I’ll bring you home some donated Bon Appétits,” she told him.

Yet, too bashful to have Julie find him with a bona fide zafu, he improvised with one of the spare bed pillows, doubling the pillow over in its cotton case and then tucking it under his backside as he sat astride it. He’d face the wall and begin by counting his breaths, but he’d invariably end up by chasing his thoughts: veal Marsala; white lasagna with Parmigiano; chicken with prosciutto, fresh rosemary and pinot gris. When Julie gently teased him about the narrow regionalism of his recipe selection he responded with:

“What do you expect from a guy named Polo?”

“Nonsense,” she laughed. “Your ancestors fought alongside Harold at the Battle of Hastings.”

“They were Italian mercenaries,” he countered back.

“That’s not what your father told me,” she said, poking out her tongue and silencing him.

What else had his father told her? he wondered the next morning as he trudged up Forest Hills Road and wondered again later on his homemade zafu after he’d lost count of his breaths. And why all the incessant wondering? Frustrated by his lack of progress at this sitting business, he attempted to corral his thoughts in a journal. After all, hadn’t Zen Roshi Aitken written a book? But what would he, Zen novice Polo, write in his own?

“Take the Zen guy’s counsel,” Julie suggested. When he looked puzzled, she added, “Pay attention. To your surroundings.”

Of course. In the mornings. On his route:

13 June 1983: The ground is ripe at sunrise. This morning I watched my shadow being born. Am getting better at one foot in front of the other.

When Julie chanced upon it, she said, “Why Zandy, you’re almost a poet.”

They were standing by the sink in their kitchen. Quiet. Thoughtful. Through the bank of windows in the far wall of their Beaches’ loft, they could see the roofs of their neighborhood descending gently to the lake, moored like rafts. Farther out, the darker blues of the motionless water and the softer blues of the sky above.

“I’m almost a lot of things,” he said after a moment.

Excerpted from Death and the Butterfly by Colin Hester. Copyright © 2020. Reprinted with permission of the publisher, Counterpoint Press.

Still stuck at home? Read these 7 books in which . . . very little happens.

Behind the Mic: On The Museum of Whales You Will Never See by A. Kendra Greene, Read by the Author 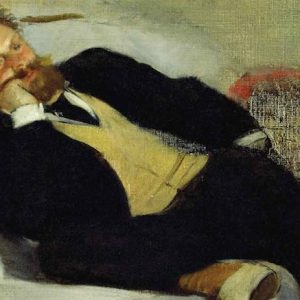 Still stuck at home? Read these 7 books in which . . . very little happens. I started writing this post as a counterpoint to the "describe your favorite book in the most boring way possible" trend....
© LitHub
Back to top