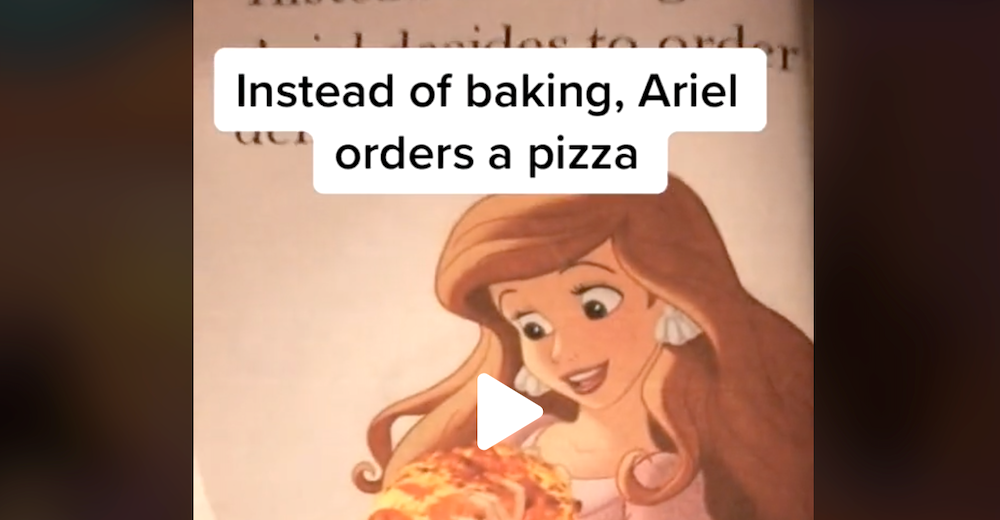 Dear parents of young kids: do you live-edit bad children’s books as you’re reading them?

I’m not sure if non-writer/editor parents do this, but back when I used to read to my kid, at least half the time I’d live-edit the text as I went, hacking out redundant clauses, tweaking awkward rhymes, and very occasionally reframing particularly retrograde viewpoints (classism, racism, misogyny oh my!). Look, there’s a lot of bad writing in otherwise engaging books for the under-five set, and when you’re editing all day, it’s hard not to bring that impulse home with you.

But I don’t think I’d ever go as far the TikTok Book Dad (BookTok Tik Dad? DookTik Bok Dad?) who’s been photoshopping Disney picture books to remove their old fashioned gender stereotypes. For example, he took an image of Ariel holding a bag of icing (presumably to please her hunky Prince Eric’s sweet tooth) and changed it so she’s holding a slice of pizza, which she ordered, which is a feminism. Actually, most of Feminist TikTok Dad’s (who can be found at @dcaspers) photoshops involve replacing baked goods with ballpark snacks, which he then prints, cuts to size, and pastes into the books.

Look, there’s a little big of Kendall yelling “Fuck the patriarchy!” to all of this, but I absolutely respect the depth of his commitment, and I hope he makes nachos for his daughter the next time they tuck in for their nightly reading of Gender Trouble.