David Sedaris Is Over Readers Calling His Family Dysfunctional

This week on The Maris Review, David Sedaris joins Maris Kreizman to discuss his latest book, The Best of Me, out now from Little Brown.

*
On getting comfortable with less humor:

As I went on tour and time passed, I thought, okay, I know I can get a laugh there. But what would happen if I went without it? At the beginning I wasn’t confident that anyone would be listening unless they were laughing. As time passed I could feel people listening, so you don’t have to elbow them in the ribs at the end of every paragraph. It was learning to trust myself a little bit more.

*
On readers who say that his family is dysfunctional:

I think that’s such a lazy word, but it’s a word people like to use. You put the “fun” back in dysfunctional. It’s a word like “people”: I tried to get through to you, but your people wouldn’t let me. Those terms are both so dated. If your father is forcing you into sex, then yeah, that’s dysfunctional. If he’s hoarding food under the sink in his bathroom, that’s just eccentric. There’s a difference between those things.

On his finely honed fashion sense:

MK: I trust that you will take this next question in the spirit it’s intended. What are you wearing right now?

DS: Right now I’m wearing a pair of horizontally striped Japanese pants that Jiminy Cricket would wear. They’re high-waisted. And then I have a horizontal striped T-shirt on. And then over that I have a paisley shirt. I just brought a bunch of clothes to the tailor to get shortened. That’s no excuse. A jacket could tie all of this together. … If I saw someone wearing this I would go up to them and say, “You look pretty great.”

David Sedaris is the author of Calypso, Theft by Finding, Let’s Explore Diabetes with Owls, Squirrel Seeks Chipmunk, When You Are Engulfed in Flames, Dress Your Family in Corduroy and Denim, Me Talk Pretty One Day, Holidays on Ice, Naked, and Barrel Fever. He is a regular contributor to The New Yorker and BBC Radio 4. He lives in England and is a member of the American Academy of Arts and Letters.

Everything Ravaged, Everything Burned by Wells Tower · The New Me by Halle Butler

6 definitively good things that came out of last night's election. 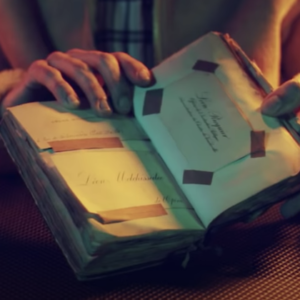 Apparently, there is only one time of year/election cycle/planetary crisis at which I am desperate enough turn to ASMR to soothe...
© LitHub
Back to top