“This may be a poem that resists adaptation.”

The following is from the foreword to The Green Knight.

What was I thinking when I wrote this?

I knew what I was getting myself into when I wrote that line, and at one point even omitted it from the screenplay for fear that it was simply too brazen. But some brew of hubris and humor compelled me to restore it, and now it’s there, in the final cut, an hour and change into the movie; a permanent reminder to myself that, when adapting a work like the one you now hold in your hands, improvement is simply not possible. The best one can hope for is a glimmer of a reflection of the original that, in the best of cases, might drive readers back to the source to discover everything you merely scratched the surface of.

There is a precedent for this, as scratching the surface is all I managed to do when I first read Sir Gawain and the Green Knight during my freshman year of college. We came to it at the end of a survey of early Western classics that began with Homer and continued on into Chaucer and Beowulf. By the time I cracked open Sir Gawain, I was all literatured-out, and tended to it with the bleary-eyed glaze familiar to first-year English majors the world over. Of the actual language and much of the plot, little stuck, but something stuck, and simmered, and I don’t think it was merely the grisly spectacle of a talking severed head.

I think what hooked me, even before I knew I was hooked, was this chivalric concept of honor—the inherent valor of something as archaic and arbitrary as, say, a beheading game. The stakes of the adventure begat by this game were as bewildering to me as they were beguiling: that Sir Gawain would willingly hold himself to the terms set by this mystical knight, that he might spend an entire year waiting to embark upon an adventure that could only end in death, implied an entirely different standard by which to measure a quest (and, indeed, a life) than a traditional hero’s journey might prescribe.

So, when I randomly decided in 2018 that I wanted to make a medieval adventure film, this poem presented itself as a ready-made option. I eagerly began to reread the original text, and indeed grew so excited at its potential that I began to write the screenplay before I’d finished reading. This may have been a mistake; when you watch the finished film, you will see evidence of my very linear and rather literal journey through a text I did not thoroughly comprehend. Sir Gawain and the Green Knight is a relatively short work, but its brevity belies a thematic density that cannot be plumbed in one semester of college, or in the process of an adaptation, or in the production of a film. There is, to put it mildly, a whole lot going on here.

I arrive now at the end of this journey with a finished film that I’ll happily admit cannot do justice to the well from which it’s drawn.

Indeed, it is one of those works about which I wonder whether the depth of interpretation exceeded its unknown author’s intent. When I make a film, I try to enrich it with thematic subtexts; I also know that there will be accidental allusions, little subconscious repositories of meaning that more astute viewers will pick up on, that are as unintentional as they are undeniable; and I know too that there are those projections, derived from the very slightest contextual evidence, that are so beyond my intentions that all I can do is shake my head at them—but who am I to argue with anyone who takes the time to read that deeply into something I’ve made?

And what happens when this process goes on for over six centuries? What effect does time have on interpretation? Was the vigor of Lord Bertilak’s hunt truly meant as a castigation of courtly mores? Was Morgana Le Fey really intended to be the heroine of the tale? Is the color green a symbol of life or a forebearer of evil? Was the knight actually green or was that an error in translation? The truth, I believe, is that, like all great works, this poem would not have endured so long were it not both rich with potential and also intrinsically solvent. You need the latter to get to the former. Even if a reader gets lost in the labyrinth of scholarly interpretation, she need only follow those threads back to find a source that is sound and resolute.

If you are about to read the poem for the first time, consider this a trial run. Things to expect: the poem feels very modern. Archaic concepts of honor aside, storytelling tropes have not changed much since the 1400s. It is also very witty and surprisingly—to put it in knightly terms—lascivious. Should the text cast its spell over you, consider exploring other translations. Weigh them against one another: see how the classic Tolkien edition compares to the modern vernacular of Armitage’s, and how Weston’s falls in between. Explore the exegeses that exist online (for starters, I recommend “Feminine Knots and the Other Sir Gawain and the Green Knight,” by Geraldine Heng, as a window into the manner of interpretations that await you). Does the poem strike you as a model of early feminist literature? If it doesn’t, know that it can.

This is advice I wish I’d given myself before embarking on my own journey. I arrive now at the end of this journey with a finished film that I’ll happily admit cannot do justice to the well from which it’s drawn. This may be a poem that resists adaptation, and yet I find myself now with a perverse, pathological desire to try again. Those hooks that were first sunk into me nearly twenty years ago have not been pulled loose by making my own movie. I imagine a not-unhappy life spent obsessively adapting it, again and again, each refined iteration illuminating a different aspect of the poem, offering some perspective on the whys and hows of its resonance—and none ever coming close to improving upon it. 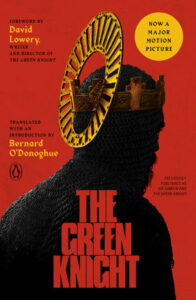 Conversations with Strangers on a Cross-Country Train Ride 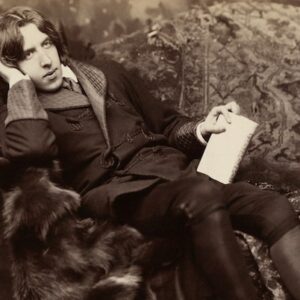 Oscar Wilde’s ship docked in New York Harbor on the evening of January 2, 1882, one week before he was scheduled to speak...
© LitHub
Back to top
Loading Comments...