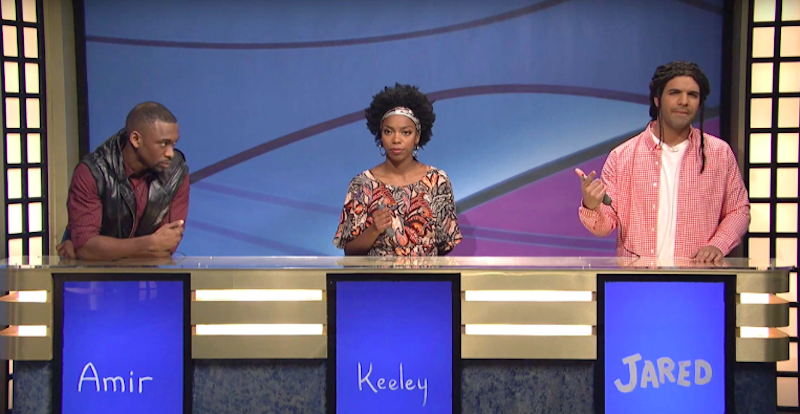 David Chariandy: ‘Black Canadians Do Not Come From Space.’

On Drake, Austin Clarke, and an Unsung Outpost of the Caribbean Diaspora

A couple years ago, Drake appeared on Saturday Night Live’s “Black Jeopardy.” If you haven”t seen that running skit, imagine the game show, but with categories like “Oh snap,” “Bye, Felicia!” and “Bruh.” The trick of each new episode is that the stereotypically “blacker” contestants are joined by an unlikely individual who appears destined, at least initially, to get every question wrong, but surprises us. In one episode, it’s Doug (Tom Hanks), a bearded man sporting a “Make America Great” cap. In another, it’s Alison (Elizabeth Banks), a woman who’s convinced she’ll do well since she once dated a Black man in college. And in the episode I’m interested in now, it’s Jared (Drake), a Black Canadian.

Jared is a shoo-in for the role of the surprising outlier. There’s his weird accent, like Steve Erkel raised in Scarborough. His answers are obscure. Asked to identify a comedian from the 80s, Jared responds “Rick Moranis.” For an experienced athlete, he says “Jaromír Jágr.”  There’s the moment we’re vaguely expecting as viewers: when host Darnell Haynes makes the obligatory jab that “no good rap comes from Canada,” and Jared asks “what about Drake?” Darnell’s comeback is “who are these people you keep mentioning?” It’s as if Jared has landed on earth “from a spaceship,” Darnell complains, adding “I think Canada has messed with your blackness.” “Why do I have to be your definition of Black?” Jared snaps back, “it’s making me so angry inside.” With that, the game bell sounds, and Jared is abruptly announced the winner. “It’s making me so angry inside” is “the secret Black phrase of the day”: the most correct thing a contestant on “Black Jeopardy” could ever say.

I’m Black Canadian, so maybe it makes sense that this skit has stayed with me. I’ve also spent a couple decades thinking pretty seriously about that related category “Black Canadian literature,” most recently as a writer understood as contributing to this body of work, and also as someone lucky enough to have his books published internationally. Black Canadian literature is extraordinarily diverse—hard to say what defines and distinguishes it, though it’s maybe worthwhile trying. And of course not every artist yearns to have their work framed as “Black Canadian,” especially when the term is far from guaranteed to win you widespread understanding and respect. All the same, Jared isn’t the first Black Canadian who has hoped to indicate his connection, if not restriction, to specific lands and communities—or at least hoped to suggest that we’re not, in fact, from outer space.

Some two and a half decades ago, the writer and critic George Elliott Clarke compiled a rather astonishing bibliography of Black Canadian writing, some two hundred years of written texts—thousands of them—stretching from slave narratives of the 18th and 19th centuries, to books and tracts by 19th century Black immigrants (e.g. the novelist Martin Delany, and the journalist Mary Ann Shadd), to the contemporary boom of writings by M. NourbeSe Philips, Dionne Brand, Dany Laferriére, Lawrence Hill, Wayde Compton, and Esi Edugyan, among many others. Read together, they put to death that old and enduring stereotype that Canada has no rich and longstanding Black presence, or that the nation exists as some fabled haven from anti-black racism. Canada, in fact, has had its own legacies of slavery, segregation, state violence, and systemic impoverishment; and Canada, no less than any other site of the African diaspora, boasts brilliant affirmations of Black life and creativity, powerfully “here,” but in complex intercultural and diasporic dialogue with the world.

For me, Black Canadian Literature is not only an archive of writings, but also conversations, connections, and intimacies. I’ve benefited from truly inspiring relationships with other Black writers. One relationship I feel compelled to mention here is with Austin Clarke, arguably the first Black professional writer of fiction in Canada. From 1964 until 2015, he published some eleven novels, six short story collections, as well as several memoirs, books of non-fiction, and poetry. Austin’s third novel, The Meeting Point, was very likely the first novel substantially chronicling Black experience in Canada.

A widely recognized figure of contemporary Caribbean literature, his life and legacy were complicated by the fact that, unlike his contemporaries, he ended up in Toronto, not in cities like New York or London. Despite his active presence on the contemporary Canadian literature scene of the 60s and early 70s; his presence and contributions are left out of many chronicles of “CanLit.” Both financially and in terms of critical reception in Canada, he remained vulnerable as a writer throughout his life. And perhaps for this very reason, he took special interest in me, and tried hard to assure me that I had a place in the world of letters that didn’t always see him. His support meant mandatory bouts of feasting and drinking, some lasting as long as 12 hours, in which he demonstrated himself a man of impossibly strong constitution, strolling home to write when I was quietly throwing up.

“Canada, no less than any other site of the African diaspora, boasts brilliant affirmations of Black life and creativity.”

Austin and I were different in a lot of ways, culturally, generationally, and politically. He always signed his emails to me “as man,” a Bajan expression of strength and solidarity; but he styled his manhood in a way different from me. We also had very different tastes and aspirations as writers, different ideas of what we wished the novel to do. But our connection remained deep.

He offered me crucial support for my first novel, and took a special interest in the novel I’ve most recently published, Brother. For years, we had many long conversations about it.

Austin’s The Meeting Point centered on Black domestic workers from the “West Indies” who were able to immigrate to Canada during the period before the policies systematically barring visible minorities from entering Canada were lifted. His novel was about vulnerable individuals whom few, at the time, would ever think to look at. My own mother was one of those domestic workers. Austin gave me a sense that art could be about the struggles, hopes, language, and everyday beauty of those close to me “here”—the generation of working class immigrants represented by my Black mother and also my South Asian father. He also gave me a sense of deeper connection to a legacy of life and art stretching beyond my birthplace, and reaching not only the Caribbean, but also the bigger Black world.

I explained to him that I wanted Brother to be about the generation after the one he was the first to chronicle, about children growing up in a land their immigrant parents needed to imagine as one of clear promise, but which the children knew also posed often unacknowledged dangers. I wanted my novel to be about youth shadowed by poverty, by the racist gaze, by the threatened violence of those in authority. But I also needed my book to reveal beauty, and to show how toughened youths and young men could brave great acts of tenderness and love. I wanted it to be a novel of painstaking attention to both language and narrative form. And as Austin drew inspiration from the music of his generation, from the legacies of jazz, soul, and reggae, I wished to honor the music that was closest to me as a youth—the hip hop of the late 80s and early 90s, including the advent of turntablism, all set within a Toronto that had rocked and found its own voice years before the “breakthrough” emergences of artists like Drake and the Weeknd. I dreamt of celebrating the completion of this novel with Austin, but he died before it was published. I ended up dedicating it posthumously to him.

I don’t watch much SNL, but I do believe in accidental moments of connection between very different kinds of artists, moments when common legacies and challenges flash into collective sight. During that episode of “Black Jeopardy,” Jared is asked to identify the artist of a hot and recent album, and he answers “Kardinal Offishall,” a rapper he helplessly explains “was nominated for a Juno.” The joke again is of the presumed obscurity of both of the artist and the award. But, then again, some of us actually remember the work of Kardinal Offishall, and of the uphill battle he and other artists faced in getting his form of hip hop supported by Canadian cultural institutions and “out there” in the world—that old and enduring battle of shifting perceptions and hierarchies of voice, of changing the structures through which art is made and life is lived. When I smiled, it likely wasn’t quite the same way most others did in the studio audience. Even when voiced in jest, the name meant something to me.

David Chariandy lives in Vancouver and teaches in the department of English at Simon Fraser University. His first novel, entitled Soucouyant, was published internationally and nominated for eleven awards and prizes. His second novel, entitled Brother, is out next week from Bloomsbury.

Is It Really Possible To Map Faulkner's Yoknapatawpha County? 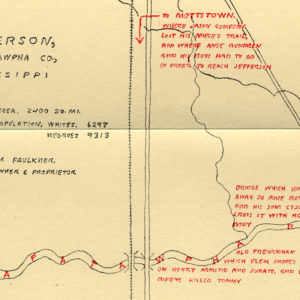 Is It Really Possible To Map Faulkner's Yoknapatawpha County?

If William Faulkner had ever been given enough money to recreate Yoknapatawpha County in the world, would he have done so? The short...
© LitHub
Back to top