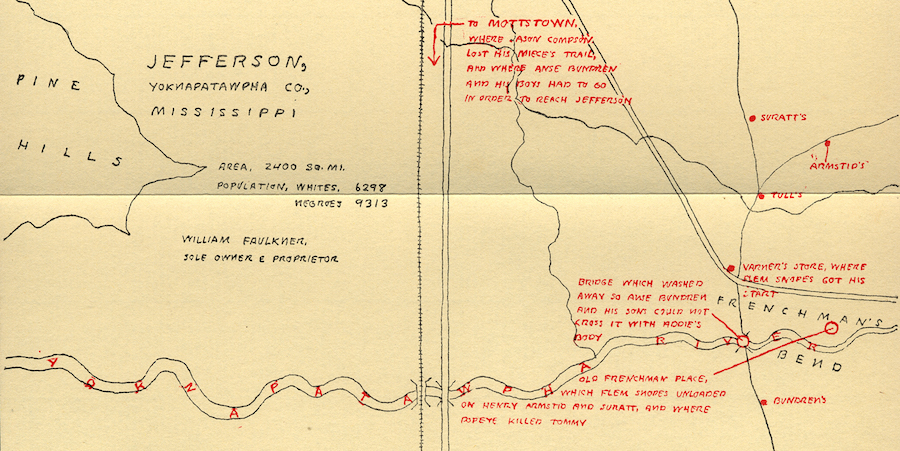 Is It Really Possible To Map Faulkner’s Yoknapatawpha County?

On Shifting Rivers, Roving Farmsteads, and Place in Fiction

If William Faulkner had ever been given enough money to recreate Yoknapatawpha County in the world, would he have done so? The short answer is “no,” thus ending an essay long before it even had the chance to begin, ignoring my compelling concern about location and landscape stemming from Taylor Hagood’s academically thick definition of Faulkner’s definition of place…

Faulkner establishes plots of space informed by an Arcadian ethic and haunted by configurations and reconfigurations of pagan values. And he uses these places to tease out the conflicts of speech and speechlessness by invoking literal historic earth to expose the mythic layers of experience that define the mythic-imperial place and control its constituents.

…and what it might mean to physically sit with the maps of Yoknapatawpha County and the stories of Faulkner themselves.

I think Hagood’s point regarding Faulkner is a good point but is one that misses the breadth of usefulness contained in having a sense of location. Vladimir Nabokov used to recommend to his students at Wellesley that they draw out maps and rooms for characters as they made their way through the world of the novel. I keep that piece of knowledge in mind when asking myself, “What does it mean to map out Yoknapatawpha County as a writer? What does it mean that Armstid Farm seems to move in-between “Spotted Horses” and As I Lay Dying?”

Does this mean there is a secret story somewhere where Henry Armstid and his wife bring workers in and move their land from one spot on the map to another? Who did they bring in to get that job done? Were there children around? How do they remember the day?

And what does it mean that the rivers that run through the county don’t seem to act like normal rivers? What does it mean to tell a story to get a sense of where you are? How do you map the invisible amongst the lines of an “actual” map?

Would we find these questions aided if we tried to bring the actual Yoknapatawpha County into the world, buildings and all, as if it were a cross between HBO’s Westworld and Peter Jackson’s Lord of the Rings?

Perhaps what the map emphasizes in Faulkner’s work— beyond the way in which characters mistreat the environment and African Americans— is the inadvertent idea that a location must be worthy of the story of our situation; that our feelings transpose us onto and into these places regardless of whether or not the location is directly capable of mirroring those feelings back to us, so even though— as John Michael Vlach notes in an essay on “The Architecture of Urban Slavery in the Antebellum South,” that  “…while the [slave] quarters [in the Robinson-Aiken house in Charleston, South Carolina] may have been pleasant to look at, the rooms in Aiken’s slaves quarters were oppressive”— the stories fill the place up. In “A Bear Hunt,” for instance, an enslaved man remembers the fact that a man in the party burned his shirt collar with a cigar, and— as a bit of revenge, years later— tells local Indians a lie so as to scare the man out of his wits, leaving the man thinking that he could very well be eaten alive.

“An A/B test of a hashtag of moral urgency can only move power to a certain point.”

Barack Obama was repeatedly praised for his ability as a storyteller, but in rereading some of these articles of praise (like John Dickerson’s preview of Obama’s Inaugural in 2009) it was fairly clear that others kept coming up short in understanding the function of its use. (Though it appears Beto O’Rourke in Texas seems to have studied the function of story in Obama’s telling and gotten a decent sense of how to make it his own.) One reason why Obama was successful was that his storytelling situated. Note that “situated’ is different from ‘provided context.” And I’m aware that to single out Obama’s talents as a storyteller because of his ability to “situate” the listener almost suggests an invocation of an Eisenhower-styled era of idealism— which doesn’t quite get to the nub of as to why was as effective as he was— but the argument here isn’t about casting the act of situating in storytelling as being exceptional; it’s not; what this is about is what it means to tell the story of who we are—and where we are—in uninterrupted flows that make their way into the sky and beyond.

That’s why it’s worth studying—even if only for an afternoon— the way Faulkner’s characters move through the landscape, even if his stories seem to resist the gravitational pull of this particular dimestore exegetical impulse. To do so leads one to realize that the text we encounter is not Iain Sinclair walking through London in the name of psychogeography to declaim on the graffiti he sees without nudging his way too deeply into the history that brought that graffiti forth. We get a little closer to the idea of the dynamic we envision when we read Jean-Paul Clébert’s descriptions of Paris, but that isn’t quite the “there” of it yet. Instead, piece by piece, we read about a camping/hunting trip recounted in broad strokes with comparatively little attention paid to the landscape. A child recalls the same woods (and their legendary occupants) in mytho-poetic terms. The face of a relative of a man referenced during said camping trip is described as “big, broad, dust-colored … of a certain blurred serenity like carved heads on a ruined wall in Siam or Sumatra, looming out of a mist.” These linkages are made over three different stories— “A Bear Hunt,” “The Bear,” and “Red Leaves,” respectively. Ironically, they make clear that the process of situating ourselves is not and has never been done in a straight line.

This is also what makes Facebook’s power plays (and the power plays of others, like Peter Thiel’s Palantir) and our broad cultural acquiescence to the rules contained within these power plays so pernicious. An A/B test of a hashtag of moral urgency can only move power to a certain point. People and a better understanding of the subtleties of dynamics are needed to carry the baton the rest of the way.

Our lack of appreciation for both empathy and polyphony— let alone our felicity with it (we insist on certainty; when we enter into the world of online rhetoric, we so clearly know; that clarity of intent drowned out our attempt to be critical or self-reflective for years)— leaves us stumbling through the wilderness hiccuping. And our insistence on reading everything within a lens of immediately actionable use speaks to the way in which the current matrix of power roils our senses. As of this writing, there are approximately 63,000 google searches done every second, and we seem to want to read and put pieces of information together as if we can move on par with that or perhaps even faster than that—as if we can move in a way akin to the language that was put to use at the beginning of the internet, as actual “surfers.” It puts me in mind of Maria Bustillos’s first piece for The New Yorker and how one can cultivate an analogous approach to reading.

But this isn’t to court the language of fatalism, defeat, or to describe one’s encounters with time. It’s just to write to say that if you find yourself adrift in this current socio-political moment and know you feel like you need to have someplace where you can begin; if you find what you could have sworn was the urgency of your personal clarity lost upon others who were keenly telling personal truths of their own and can feel your part in being part of the political moment moving elsewhere, then one way forward—if Faulkner is any indication—is to say that you couldn’t do any worse than by taking a look at where you are.

Color or Fruit? On the Unlikely Etymology of "Orange"

David Chariandy: 'Black Canadians Do Not Come From Space.' 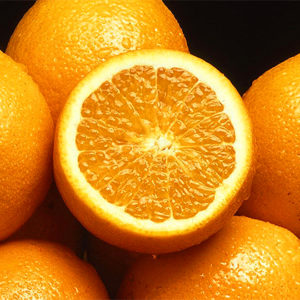 Color or Fruit? On the Unlikely Etymology of "Orange"

The human eye can distinguish millions of shades of color, subtly discriminating small differences of energy along the visual...
© LitHub
Back to top