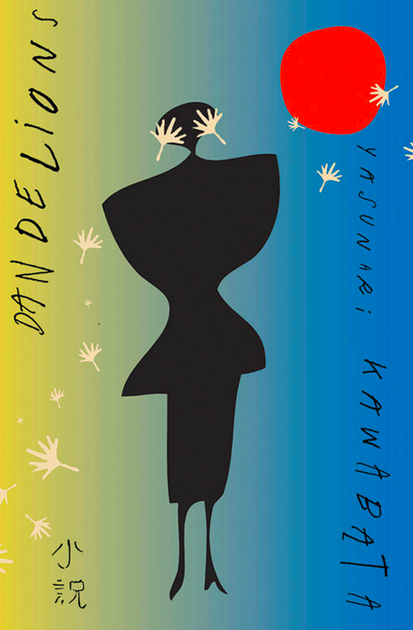 The following is from Yasunari Kawabata’s novel, Dandelions. Kawabata explores the incommunicability of desire as well as desire’s relation to the urge to hide. Kawabata carries the art of the novel, where he always suggested more than he stated, into mysterious new realms. Best known in the West for such novels as Snow Country, Sadness, and A Thousand Cranes, Yasunari Kawabata became the first Japanese writer to receive the Nobel Prize for Literature.

Dandelions cover the banks of Ikuta River. They are an expression of the town’s character—Ikuta is like springtime, when the dandelions bloom. Three hundred and ninety four of its thirty-five thousand residents are over eighty years old.

Only one thing seems out of place in this town: the madhouse. Though maybe it helps for a madhouse to be in such incongruous surroundings. Perhaps whoever chose to put one here, in this quiet, sleepy, graying town, was a sage. Not that every disturbed mind can be cured by peaceful surroundings: the mad inhabit their own worlds, detached from reality, and a simple change of scenery doesn’t usually have much of an effect on that. Staying at the clinic, here in Ikuta, probably does less for the patients themselves than the town does for the people who bring them. Madness is more idiosyncratic than sanity; no single cure suits all patients.

The families and friends of the mad are blessed, however, by the bright landscape and the welcoming, dandelion-like glow of the town, which blunts their guilt—no, they were not abandoning their loved ones, locking them away in the sort of cruel, desolate environment that comes to mind when one thinks of an insane asylum. As they walk down the path on the riverbank after leaving their lunatic in the clinic on the hill, they hear behind them the long, low gonging of the temple bell. It’s as if the one they had left behind is calling to them, saying goodbye. As if the bell is being struck to mark their parting. Forlorn but not unsettled, its ringing passes over the town and heads out to sea. Nothing in the sound suggests that the person striking it is deranged.

The doctor mentioned the bell as Kizaki Ineko’s mother and Ineko’s lover, Kuno, were on their way out, leaving Ineko behind.

“If you hear the bell as you go,” he said, “assume it’s her ringing it.” “Excuse me?” Ineko’s mother said, nonplussed.

“One day we let the patients strike the bell, and they all got so excited . . . Now more of them want to ring it each day than we can possibly manage. Some patients ask us to let them strike it when they’ve recovered, as a way of marking the end of their stay. And we like to let new patients strike the bell when they join us, unless their symptoms are too severe. Naturally, the nurses stay with them, and not many of our patients are in such dire straits that striking a bell would be too much for them. Your daughter’s symptoms for instance are quite mild.”

“We think there may be something therapeutic in ringing the bell. Of course, we can’t be sure—this isn’t surgery or internal medicine, after all. Sometimes you think they’ve gotten better, only to have things take a sudden turn for the worse, and in many cases you can’t even identify the cause of their illness. Some of our younger doctors, though, insist they can tell just from the sound of the bell how a patient is doing.”

“The ringing is definitely telling us something, that’s for sure. You hear something coming from deep within them, perhaps—deep in their hearts.”

“Is that so?” Kuno nodded, eyeing the doctor a bit skeptically. “As you know, our patients are isolated from the world. But when

they strike the bell, the sound carries beyond the clinic, all through town. Whether or not they realize it, our patients are addressing themselves to the outside world. Or, to put it in slightly grandiose terms, by ringing that bell, they’re reminding the world that they’re here—that they exist.”

“It sounds kind of sad when you put it like that,” said Ineko’s mother.

“Sad? I wouldn’t say that,” said the doctor. “After all, the people of Ikuta have no way of knowing who is striking the bell—I doubt they even wonder. All they hear is the hour. It’s such a part of everyday life now, I’m sure they’ve forgotten that the people ringing it are crazy. They don’tnotice how the tone shifts, or how it reveals the things our patients hold in their hearts—it’s a timepiece, nothing more. And yet it’s part of their landscape, the ringing of the Ikuta Clinic bell.”

“The priests used to strike the bell once at six in the morning and then again at six in the evening. Striking it was such a delight for our patients, though, that we asked the town to let us ring it five times a day—at six and eleven in the morning, three and six in the afternoon, and then once more at nine in the evening. Not many towns have bells five times a day. Some of the townspeople were against the nine o’clock bell, but it helps our patients prepare for bedtime, and it’s such a tranquil, peaceful sound that the town agreed.”

Ineko’s mother and lover gazed down at Ikuta from the clinic’s doorway.

“It’s such a nice, easygoing town,” Ineko’s mother said. “I doubt anyone living in a place like this would ever succumb to a peculiar condition like body blindness.”

“Your daughter’s condition is extraordinarily rare, it’s true,” said the doctor. “None of us has ever encountered a case of somagnosia before.”

Ikuta Clinic stood on the grounds of Jōkōji, a dilapidated temple with hardly any income, as the priests’ decision to allow an insane asylum within its precincts made clear. Nowadays it almost seemed as though the temple was on the grounds of the clinic. Patients didn’t just strike the bell; as long as there was no danger of their turning violent or running away, they could roam freely in the garden and go up into the temple’s main hall, where they did handicrafts and other such things, just as they pleased.

Old Nishiyama, for instance, who had lived so long in the clinic he seemed like its master, often spread sheets of paper on the tatami floor to practice his calligraphy, writing very large characters. The mad old man hardly ever had plain white paper, whether Japanese or Chinese, so most of the time he used old newspaper.

He almost always wrote the same eight-character phrase: To enter the Buddha world is easy; to enter the world of demons is difficult. His sight was clouded by cataracts, but the calligraphy was forceful. There was nothing mundane about it, and nothing showy either. Only, perhaps, a hint of madness. The characters were neither loud nor disturbed in any clichéd way, but if you looked carefully you began to sense something maniacal in them, something demonic. Maybe there had been a time in Old Nishiyama’s life when he tried to enter the world of demons, but he found it too difficult, and the agony of that failure gave the calligraphy of his lunatic old age its flavor. Whatever form his “world of demons” may have taken, his determination to enter it caused him such pain that it cost him his sanity. From his point of view, the asylum bore no resemblance to the world of demons, but it probably also never occurred to him to consider it a refuge, a place of rest for those who tried and failed to enter that other world.

Nowadays, Old Nishiyama was among the clinic’s quietest patients. He had lost his teeth and had never gotten dentures, so his cheeks were sunken; he was bald apart from a fuzz of soft white hair at the back of his head. It was hard to imagine, looking at him, that he would have the strength for anything demonic—it was only in his writing, you might say, that traces of that spirit lingered. The old man tended to lose his temper during calligraphy practice, but in so mild a manner that it probably wouldn’t have been a problem even in an ordinary old people’s home.

Old Nishiyama looked forward to the weather report on the radio every day, before the seven o’clock news. He had no interest in the information itself—warnings for instance that it would be a bit windy and choppy on the ocean tonight and tomorrow, with poor visibility from the fog. What he loved was the voice of the young woman who read it out. She sounded marvelously gentle, her tone soft but not too soft. The old man felt as if this charming young woman were speaking directly to him from the world outside the asylum. Her voice brimmed with love. It was a comfort to the old man, a consolation. It was an echo of the gorgeous days of his youth. He didn’t know her name, he’d never seen her, and no doubt she would go on broadcasting the weather in that lovely voice long after he was dead, but none of that mattered to Old Nishiyama: she was the only one who talked to him, to the wreck he had become, day after day, with love in her voice.

The patients showed Old Nishiyama a certain deference; few crazies ever tried to strike up a conversation. Kizaki Ineko had a lovely voice, so he might be pleased if she were to strike up a friendship. Perhaps that would have led in an odd direction, though. Afflicted as she was with somagnosia, she might not have seen Old Nishiyama’s body at all—just a brush gliding across the paper, tracing those eight characters: To enter the Buddha world is easy; to enter the world of demons is difficult. And if Old Nishiyama were somehow to discover his own invisibility to Ineko—that all she saw were his brush and the characters it traced—maybe he’d leap for joy, believing that at last he had gained entry to the demonic world. Or maybe he wouldn’t . . . perhaps it was a mistake to assume that his “world of demons” could ever assume so mild a form. Of course, it was possible, too, that as his spirit succumbed to the ravages of old age, so too did his “world of demons.” Perhaps a few moments with the youthful Ineko would be all it would take to transport him there. Maybe reaching his “world of demons” was no longer so difficult that just trying would cost him his sanity.

From Dandelions. Used with permission of New Directions. Copyright © 2017 by Yasunari Kawabata.

How Important is the First Draft to Your Novel? 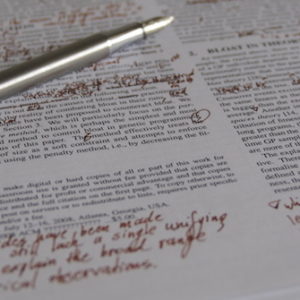 How Important is the First Draft to Your Novel? We’re an odd lot, novelists. Obsessive. Why else does someone launch a project that consumes so much time and holds out such...
© LitHub
Back to top