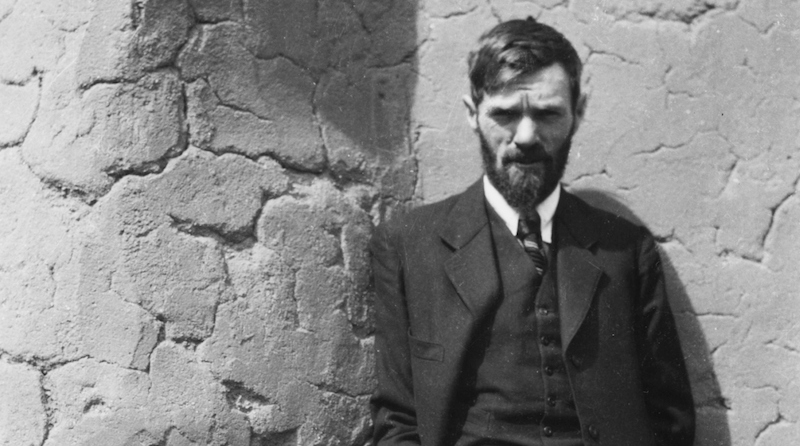 D.H. Lawrence was the king of innuendo—but wouldn’t admit it.

91 years ago today marks the death of D.H. Lawrence, who E.M. Forster called “the greatest imaginative novelist of our generation” and whose writing Joseph Conrad called “Filth . . . nothing but obscenities.” Both can be true; today we’re remembering a work by Lawrence that is both filthy and greatly imaginative, and how coy Lawrence was about it.

Lawrence’s posthumously published novella The Man Who Died, which follows a post-Resurrection Jesus Christ discovering the pleasures of the natural world in his last days on Earth, was originally a story titled “The Escaped Cock.” Yes . . . “The Escaped Cock.” 50 copies of “The Escaped Cock” were printed before Lawrence’s death, but the first unlimited edition was published with the new title The Man Who Died, which was never approved by Lawrence. While Lawrence was alive, the original title was questioned by the publisher—for obvious double entendre reasons—but, incredibly, Lawrence claimed that he didn’t mean it as innuendo. Says Brenda Maddox in D.H. Lawrence: The Story of a Marriage:

[Lawrence] refused to acknowledge that ‘cock’ connoted anything but a rooster, just as he denied the blasphemous pun contained in the story’s climactic line, uttered just as the man observes the miracle between his legs: “I am risen!”

Wow: Lawrence called his story about Christ getting Resurrected and having sex “The Escaped Cock,” used “I am risen!” for an erection joke, and said he knew nothing about it. Forgive me for not believing him. Yes, there is a literal rooster featured at the beginning of the story, but that only renders the innuendo greater: the entire text identifies Christ with the (sorry) cock, who is initially tied up, then breaks its leash and escapes.

I’m pretty amazed that for a work written by a man generally mired in scandal, this book didn’t spark widespread controversy—it promotes the wonders of the natural world over a life of faith, and Christ discovers the joys of sex. Anthony Burgess posited in Flame Into Being: The Life and Work of D.H. Lawrence that The Man Who Died avoided some scrutiny because Lawrence avoided directly invoking the name of Christ. Plausible deniability is the name of the game here: the title doesn’t mean what it obviously means, the pun “I am risen” is a mere coincidence, Christ could even be explained away as merely Christlike. D.H. Lawrence, you win this time.