"I knew words he had written and that made him practically a god."

My first year at Sonoma State, the school I finally was serious enough to graduate from, I was taking my first poetry writing course and I had read few living poets. I wasn’t even sure there were many of them in existence; the two I had seen give readings so far (Robert Bly and Sir Stephen Spender) seemed old and far away already. I never thought about whether anyone else I read was alive; most of them so far were not. I also didn’t own many poetry books. Dudley Randall’s anthology Black Poets and T.S. Eliot’s The Wasteland and Other Poems were the two I bought myself in high school. And Shakespeare’s sonnets. In three other failed attempts at college I HAD acquired a few more. Lorca, Giovanni, and an anthology put together by Kenneth Koch of poetry I mostly didn’t get or appreciate. I read Howl and Other Poems, but I never owned a copy. Oh, and I had read Tennessee Williams’ poems, which I thought were terrible, and Gwendolyn Brooks’ In the Mecca, which I had checked out of a library. So not a whole lot.

So this first poetry course was an opening of my under-served mind. Well, not exactly my first poetry course. My first poetry writing course. I had taken a poetry reading course at my first college and it almost killed my interest in poetry. I could not appreciate Wallace Stevens’ “Sunday Morning” nor any other damn day he wrote about, nor most of the others, either. But I did like a poem by Roger McGough, several poems by ee cummings, something by Yeats, Etheridge Knight (whom we were not assigned but I read anyway), that “Marriage” poem by Corso and all the poems by Lawrence Ferlinghetti—all four of them anyway—and the first section of “Howl” which had been printed in the anthology unexpurgated, surprisingly.

Anyway, my poetry writing professor, David Bromige, was just the sort of poetry professor anyone should have. He daydreamed openly and misread everything meaningfully. He wore loud socks and a blue blazer or a v-necked sweater and was bemused. We had our class meetings in the green room of the campus theatre arts building; a room filled with slip-covered old sofas. David didn’t like fluorescent lights, so he’d wheel in a luggage cart filled with small lamps from a thrift store, and we’d read poems off dittos (those purple precursors to photocopies) and smoke.

One afternoon, I was sitting in the pub on campus and David walked in with this taller dude who looked like he could be a bass player in a trio. Once they’d gotten their drinks, they scanned the place for an empty table. David saw me at a four-top and brought his friend over to sit with me. “This is one of my students,” he said. And, turning, “This is Lawrence Ferlinghetti.” I know I said hi. But little else. I just sat there with my beer and my ugly notebook and thought, “This is the guy who wrote that Golden Gate Park poem. And I remembered “the enormous meadow / which was the meadow of the world” and I thought how is it that someone whose poems I’ve actually read and liked and remembered is here next to me and not, say, in a palace somewhere being waited on by servitors and scribes. THERE WAS SO MUCH I did not know about poetry in America. But I knew who Lawrence Ferlinghetti was. I knew words he had written and that made him practically a god. I could scarcely look at him. And I certainly couldn’t speak.

I teach now at the University of San Francisco, an institution where Ferlinghetti once taught but was released from service quickly. As he put it in an interview, “I was giving a lecture on the homosexual interpretation of Shakespeare’s sonnets and in walked the priest who headed the department. That was the end of my academic career.” A few years later, USF was one of two Bay Area catholic universities to send “expert witnesses” to the obscenity trial against him for the publication of Howl. A witness for the prosecution.

So I have felt it my moral duty during my time here to right a great wrong. We exorcised the demon of homophobia publicly with a communal reading of “Howl” during a National Day of Writing celebration. And when I moved from teaching in the English Department to teaching in the MFA program, we established the Lawrence Ferlinghetti Fellowship to support a student whose work reflects the kind of social justice and artistic freedom that he has championed. I still love to go to that place in his poems “at a very still spot where the trees dreamed” by the meadow “which was the meadow of the world.”

D. A. Powell's books include Repast (Graywolf, 2014) and Useless Landscape, or A Guide for Boys (Graywolf, 2012). He teaches at University of San Francisco. 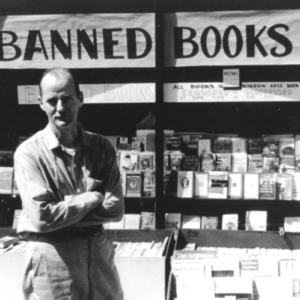 Ferlinghetti for Neeli Cherkovski Lawrence never let me treat him like a famous man I sat down to interview him a green...
© LitHub
Back to top