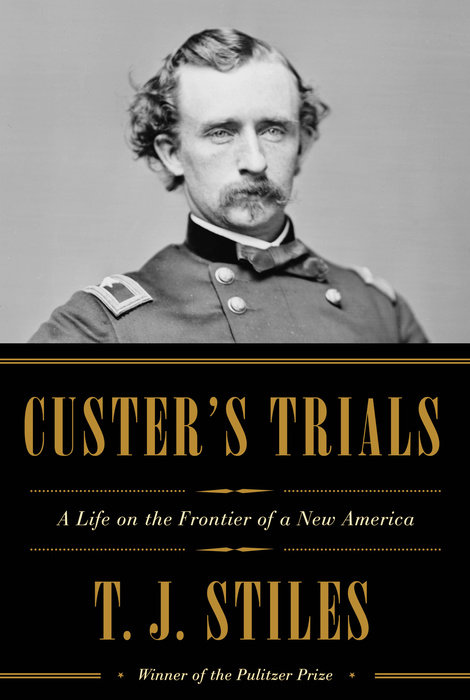 The following is from T. J. Stiles' book, Custer's Trials. Stiles has held the Gilder Lehrman Fellowship in American History at the Dorothy and Lewis B. Cullman Center for Scholars and Writers at the New York Public Library and taught at Columbia University. His previous books have won the Ambassador Book Award, the Peter Seaborg Award for Civil War Scholarship, the National Book Award, and the Pulitzer Prize for Biography.

“After you went I watched you admiringly as you rode along,” Libbie Custer wrote to her husband, “then I went up to my room to cry.”

She remained in Washington, in a boardinghouse shared by people who alarmed her, owned by a woman who complained about the Yankees who rented the rooms. She smelled the rosebuds in the garden. She played with her kitten. And she felt the void of Armstrong’s absence.

She tried to like Washington by dwelling on Georgetown, if not in it. She enjoyed church, too, but it was a shallow puddle of piety in the city’s filthy streets. “In this Sodom and Gomorrah everybody drinks,” she wrote. When she went out, she draped herself in drab—nothing more colorful than gray, or else the soldiers who staggered down sidewalks would assume she was a prostitute. She could not even wear blue!

“Armstrong, like most nineteenth-century men, believed his wife his moral superior,” writes Libbie’s biographer, Shirley Leckie. In his letters, he described a marital division of labor, in which he would earn fame and she would keep him holy. He observed his old pledge to never drink, but gambled and cursed with enthusiasm. He assured her he swore less now. He belonged to no church, but described a private faith activated by his love for her. And he asked her to be “my treasurer.” He wrote, “Only bear in mind we are just entering upon life’s journey with all its cares, and, I hope, in a short time its responsibilities.” It was an allusion to elusive parenthood. In the meantime, Libbie had plenty of responsibilities.

The Republican ascendancy left Armstrong feeling vulnerable and anxious. But Libbie could now be his “friend at court.” She could charm congressmen and senators with her beauty, style, and educated wit. Leckie writes, “They had formed a partnership, committed to moving the boy general up the ladder of success.” But it would be complicated, in part, by Libbie herself.

“Of course I am no abolitionist,” she wrote. She declared this a year and a half after the Emancipation Proclamation, a year after the establishment of the federal Bureau of Colored Troops, and as tens of thousands of black men volunteered to fight in the Union army (ultimately reaching a total of 179,000). She wrote this after meeting and thinking well of Eliza Brown, the escaped slave who wanted to help win the war. She wrote this at a time when the sentiment in government favored abolition; even soldiers in the conservative Army of the Potomac now called for ending slavery to win the war. The nation was changing; Libbie was not.

It’s revealing that she wrote, “Of course.” It seems that anyone who knew Libbie knew her politics. Her tendency to express her opinions made men nervous. “You and Autie have cautioned me about holding my tongue on army and political matters,” she wrote to her father— then expressed her outrage at a rumor that General Pleasonton had been sacked because the administration suspected he was a political enemy. Now she had to do more than keep her mouth closed. She had to cultivate her political foes.

Representative Francis Kellogg, a stout fifty-three-year-old with a bulbous nose, took Libbie and his own wife to the White House. President Lincoln was holding a levee—a reception for the public. Carriages crammed wheel to horse nose on the curving drive to the front door. Libbie moved in a crush past soldiers standing with swords drawn. “The crowd was so dense I could not move my arms, but was fairly pushed in,” she wrote. Finally the line brought her face-to-face with Lincoln, “his Highness” and “the prince of jokers,” as she mocked him in a letter, “the gloomiest, most careworn looking man I ever saw.” From his great height he briefly acknowledged her, then realized who her husband was.

He enclosed her small hand in his oversized grip “very cordially” and said, “So this is the young woman whose husband goes into a charge with a whoop and a shout. Well, I’m told he won’t do so any more.”

I hope he will, she replied. “Oh, then you want to be a widow, I see.” He laughed and she laughed, but they both knew it was not really a joke. Lincoln carried the weight of the generation he had ordered toward death, and yet he had to push the thing to its end. He admired Custer, he needed Custer, but he understood the mathematics of modern firepower as well as anyone. Libbie generously accepted his remark simply as a kindness. “I never liked Mr. Lincoln particularly before I came here but I do now,” she wrote to an aunt. “He is very genial and kind hearted and as he said some very pleasant things to me about my husband.”

Her personal lobbying continued that very morning. Kellogg introduced her to Speaker of the House Schuyler Colfax. Colfax turned to Kellogg and said, “I have been wishing to be presented to this lady, but am disappointed she is a Mrs.!” It flattered her, but she appreciated the effect she had on men, especially men of power. She cultivated the righteous and the lecherous alike, as long as they possessed influence. She received a visit from the former congressman John A. Bingham, for example, the gentlemanly Republican who had appointed Custer to West Point. He was a judge advocate now, but still regarded Custer “as his protégé.” And she went to the hops at the National, as Armstrong “urged” her, where senators slurred and stumbled over her. Senator Chandler, she wrote, “is an old goosey idiot. Now his wife is away he is drunk all the time. And O, so silly.”

She visited the Capitol, reminding congressmen of both her husband and her beauty. Colfax greeted her warmly “and oh he said lovely things about you,” she wrote to Armstrong. “I like him best of all here, he is so polite and not a bit of a flirt,” she added, in an implicit contrast with the rest of Congress. Stepping outside, she encountered Kellogg. “We are going to make him a major general, Mrs. Custer,” he proclaimed.

“Scarcely anybody here likes Mr. K,” she wrote, referring to Kellogg. “Some say he is dishonest and licentious. It makes no difference to me. I see nothing but a gentleman and a kind friend.” Note that she did not dispute the characterization; she took a practical view, and indeed her husband urged her to stay close to the man. Kellogg shamelessly traded favors, webbing the Capitol with his influence. But he certainly was licentious. One evening he called on Libbie, alone, at her boardinghouse. He was “very cordial,” she wrote. “Too much so.” He moved in to kiss her, and she adroitly slipped aside, offering him her chair. She remained calm, and he pretended nothing had happened. “Any lady can get that man to do anything,” she remarked.

His wife shocked Libbie more. “She is a flirt.” She stopped by Libbie’s boardinghouse with a friend, not to see Libbie, but a colonel who also lived there. “It was very bold. She is an intense woman.” Libbie had never known prominent, purportedly respectable women to behave so freely.

Grant’s campaign progressed, impossible to forget. The wounded and dead rattled into the city by ambulance and wagon by the thousands. “We see so many crippled soldiers and bandaged up for wounds—men with one arm—one leg—walking about the streets.” Funerals became constant; embalming establishments proliferated. Libbie visited the hospitals, crowded with men with infected wounds, the sick who vomited and fouled their beds with diarrhea, the piles of limbs cast off by surgeons. The stench was “horrible,” she wrote. She went to see Custer’s men, and they praised him, telling her they could not believe his luck at surviving. It did not reassure her.

Libbie followed her husband’s progress with rising anxiety. After Yellow Tavern, his brigade fell into the grinding combat that characterized the campaign. First came a hard battle through woods, on foot, against Hampton’s cavalry at Haw’s Shop, Virginia. It was followed by Cold Harbor, where Custer’s dismounted troopers stormed defensive works and held off counterattacks. A far costlier infantry battle followed.

Jim Christiancy arrived in Washington—carried there, for he could not walk. At Haw’s Shop, he had ridden along the line with Custer and Jacob Greene as the troops ducked below enemy fire. A Confederate bullet killed Custer’s horse. Another struck Greene in the head—painful, but the round’s energy was “spent,” in the language of the day, having lost its force by flying too far or passing through brush, and he suffered no serious injury. Christiancy, though, was hit in the thumb and, more seriously, the thigh.

Libbie refused to leave him in a hospital. She brought him back to her boardinghouse. She changed his bandages and cleaned his wound, which each day oozed pieces of his pants, driven into his thigh by the bullet. Already friends, they grew closer. When she cried over a letter, he did too. When she pricked her finger sewing, he fretted “as if it were a battle wound.” She spoke frankly to him about his alcoholism; he needed a good wife, she said. She remarked that people treated her kindly because she was Mrs. General Custer; he said it was because she was Libbie Bacon. But no one saw anything suspicious in such close contact.

She feared for Armstrong, but she did not regret her choice. She wrote her aunt, “I believe if ever God sends men into the world for a special purpose Armstrong was born to be a soldier.”

From CUSTER’S TRIALS: A Life on the Frontier of a New America. Used with permission of Alfred A. Knopf, an imprint of the Knopf Doubleday Publishing Group, a division of Penguin Random House LLC. Copyright © 2015 by T. J. Stiles.

Where Do Book Titles Come From? 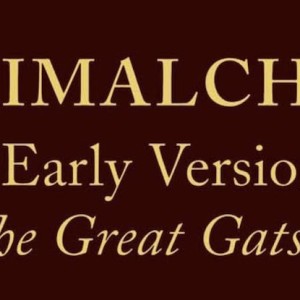 Where Do Book Titles Come From? My interest in book titles came upon me suddenly, like a fever or a first love, when I was 16 years old. Mrs. Topik, my sophomore...
© LitHub
Back to top