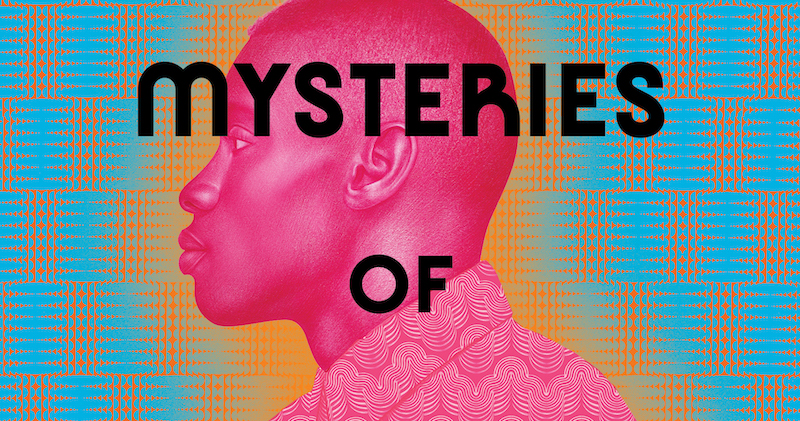 Literary Hub is pleased to reveal the cover for Stephen Buoro’s debut novel The Five Sorrowful Mysteries of Andy Africa, which will be published by Bloomsbury in April 2023. Here’s how the publisher describes the novel:

Andrew Aziza is a fifteen-year-old boy living in Kontagora in Northern Nigeria. He lives with his secretive mother, Gloria, and spends his days about town with his droogs, Slim and Morocca. He’s contemplating the larger questions with his teacher Zahrah and his equally brilliant friend Fatima, a Hausa-Fulani girl who clearly has feelings for him. Together they discuss mathematical theorems, Black power, and what Andy has deemed the curse of Africa.

Inevitably, Andy falls hopelessly in love with the first white girl he lays eyes on: Eileen, Father McMahon’s niece. But at the church party held to celebrate her arrival, multiple crises loom. The first is that an unfamiliar man there claims to be Andy’s father. The second is that an anti-Christian mob has gathered, headed for the church. In the ensuing havoc and its aftermath, Andy is forced to reckon with his identity and desires and determine how to live on the so-called Cursed Continent.

The Five Sorrowful Mysteries of Andy Africa announces a dazzling, distinctive, new literary voice. Crackling with energy, this tragicomic novel provides a stunning lens into contemporary African life, the complicity of the West, and the impossible challenges of coming of age in a turbulent world.

And here’s the cover, which was designed by Bloomsbury Creative Director Patti Ratchford: 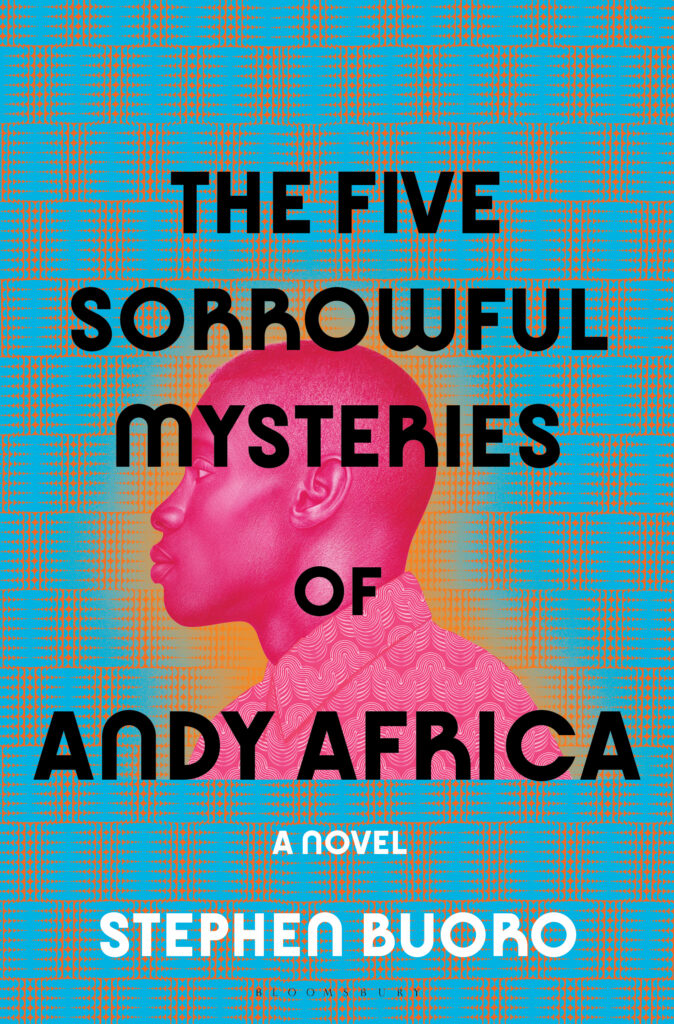 “There were so many visual possibilities for a book as layered and dynamic as this that in some ways the difficult part was just trying to simplify the design,” Ratchford told Literary Hub.

The main inspiration comes from early on in the book when Andy’s teacher introduces her students to Anifuturism (Animism and Afrofuturism) and says every African child is a witch, wizard or superhero. She gives Andy Africa his nickname, telling him that the letters in his name have a numeric significance and suggesting that he has powerful ancestors. The book plays a lot with this idea of Andy Africa as a superhero or religious figure and it occurred to me to have his head on the cover with an aura like an icon. The unsettling contrasting colors and electric pseudo-African pattern were used to convey Andy’s emotional turmoil, his uncertainty about whether to embrace Africa or not, and the energetic nature of the story.

“One night last year, as I was about to go to sleep, I saw an email notification on my phone titled, ‘Cover,’” Buoro told Lit Hub.

And when I opened it: voilà!, one of the most haunting pieces of art I’d ever seen! I stayed up late, staring and staring, each element of the cover unveiling itself to me, re-enacting/reanimating my novel. Blue and orange, lush, powerful. The blue of oceans, the orange of fire and of haloes: conveying a desire for otherness and migration on the one hand, violence and Afrofuturism on the other, pivotal themes of the book. These themes are also rendered in the chequered background consisting of galaxies of shapes – triangles, diamonds, crescents, circles – which signpost the mathematical and cosmological motifs and fascinations of the book. And in the foreground: a young Black man with a halo around him, his expression cryptic, his gaze distant: he finds himself trapped amongst these narratives and must resolve them. The cover is energetic, character-driven, even playful (see for example the font of the title). I love how the cover alters when subjected to different hues of white light: the blue and orange alternate, receding or becoming more prominent, finding new ways to delight the viewer, exactly what all great art does. Huge thanks to Patti Ratchford and to Bloomsbury for such a fascinating cover.

The Five Sorrowful Mysteries of Andy Africa will be published on April 18, 2023. You can preorder it here.