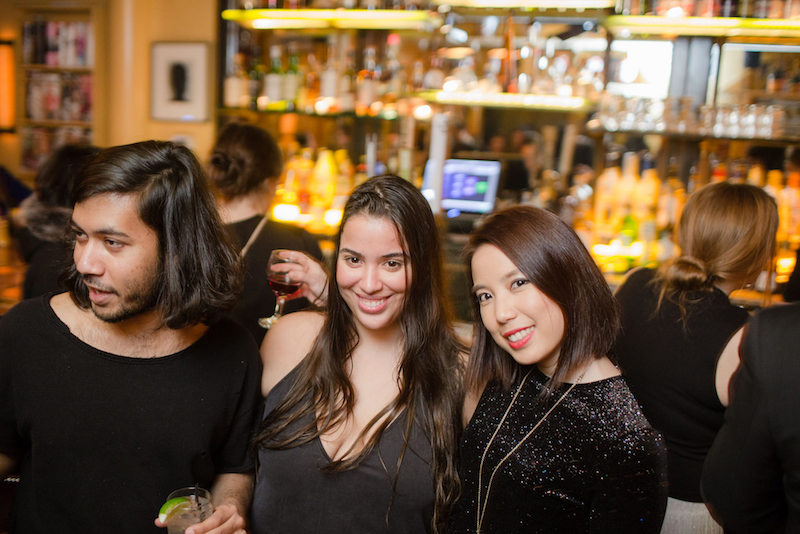 In which the night, like all good nights, ends on a secret

It’s hard to keep people in their seats for two hours, but the 2017 PEN Literary Awards, hosted by Aasif Mandvi, made sure to provide performances to keep us sated and happy, like children who need constant stimulation. When Natalie Scenters-Zapico won the PEN/Joyce Osterweil Award for Poetry, she read one of her poems onstage by a violinist. Preceding Suzan Lori-Parks’s speech for her PEN/Laura Pels Award for Master Dramatist win, Matthew Harris and Tyrone Mitchell Henderson from the Huntington Theater Company performed a transporting scene from one of her plays, Topdog/Underdog. Hamilton Leithauser of The Walkmen also played a Leonard Cohen song.

After an introduction heavy on barroom anecdotes of virtuosic absentmindedness and general ignorance of deadlines, William Nack walked up to accept his PEN/ESPN Lifetime Achievement Award for Literary Sports Writing. “Those are all true stories, I’m afraid,” he admitted. Tarell Alvin McCraney won the PEN/Laura Pels Award for American Playwright in Mid-Career. He’s the writer of In Moonlight Black Boys Look Blue, which the film Moonlight was adapted from, and once he got onstage he joked, “I have to admit I was surprised. . . and you’d think I would be used to surprises by now.” The ceremony was also educational: we learned, via footage from a Politics & Prose event featuring PEN/Jean Stein Book Award finalist Colson Whitehead, that “Giddy up, motherfucker,” is publishing speak for, “That’s a very good idea and we should pursue it,” i.e. what his editor said to him when he told him the idea for The Underground Railroad.

Thanking spouses and editors was the theme of the night, and why not? Writers are famously terrible to live/work/coexist with. Joe Jackson, winner of the PEN/Jacqueline Bograd Weld Award for Biogaphy, thanked his editors, who “quickly realized I don’t understand basic ideas, like maximum word count,” and suggested, “there should really be some sort of prize for writer’s spouses and partners, because they really don’t know what they’re getting into when they sign up.” Suzan Lori-Parks snuck in a thank-you to her husband for being “the best arm candy ever.”

When Rion Amilcar Scott won the PEN/Robert W. Bingham Prize for Debut Fiction, for Insurrections, he took the stage saying, “I didn’t expect to be up here. . . part of me feels like I’m gonna be La La Land-ed.” As the ceremony wound closer to the end, Naomi Jackson, author of The Star Side of Bird Hill, asked if we were all still awake. “If you’re getting itchy for a cocktail—or the subway—this is the last group of awards!” she promised. Mouths began to water, and not for the subway.

Like the ceremony, the reception at The New School was very well-attended. Book Marks editor Dan Sheehan was detailing the American ritual of power hour to a small crowd unsure of why an Irishman knew about this. Rowan Ricardo Phillips was introduced to me as a famous poet and tennis player. “I’m probably a more famous tennis player than poet,” he said dryly. Marisa Siegel, editor-in-chief of the Rumpus, chatted with me about depressing children’s books and rabbit Xanax. I talked to writer Garnette Cadogan, who is very fun at parties, about being fun at parties. He told me that he’s been doing this for a while: by age ten, he was staying out past midnight at the dance halls in Kingston. This would be surprising coming from literally anyone else.

Crystal Hana Kim, who won one of the PEN/Robert J. Dau Short Story Prizes for Emerging Writers for her story “Solee” in The Southern Review, was also the winner of the Best Jumpsuit award (black, wide-legged and cropped, tied with a bow at the waist). We talked about the latest beauty craze of tattooing freckles onto your face. Another PEN/Robert J. Dau winner was Samuel Clare Knights for “The Manual Alphabet” in Fence, who had the best beard in the room (the facial hair kind).

Gabriel Packard, associate director of the MFA program at Hunter, said that he liked that tonight was “an award ceremony that wasn’t an award ceremony,” citing the multi-media aspects. I asked Joel Whitney, co-founder of Guernica, which won the PEN/Nora Magid Award for Editing, what his least favorite thing about award shows was. He said it was his own personal demon: “the division between wanting to go drink and wanting to hear speeches.”

Leslie Shipman, literary program consultant at PEN, was walking around handing out cards for the after party, explaining “I’m the new Paul Morris tonight.” She said she might not be attending said afterparty, which we explained she had to if she was the new Paul Morris. Speaking of the afterparty, it was at Bar 6, where someone who wished to remain anonymous told me that Saeed Jones has the best ass in publishing. It’s always nice to end the night on a secret. 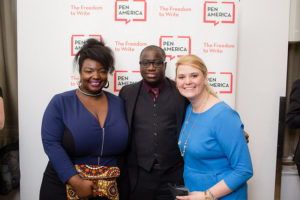 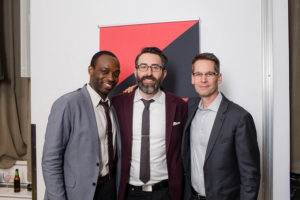 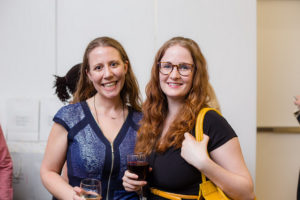 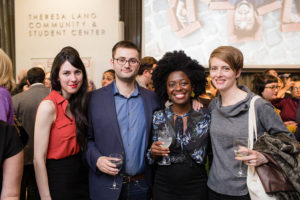 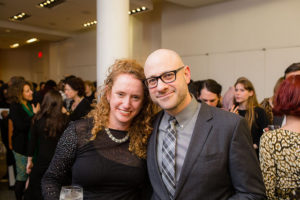 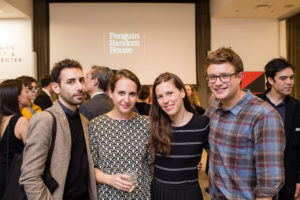 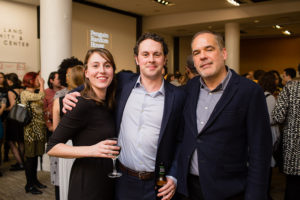 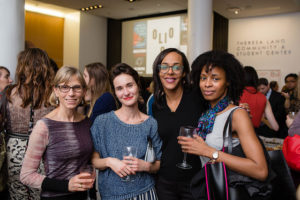 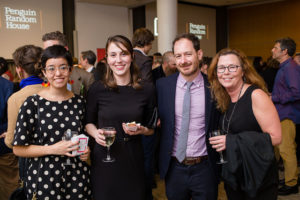 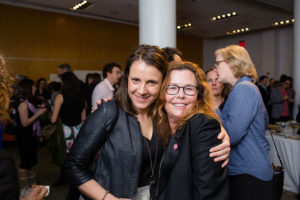 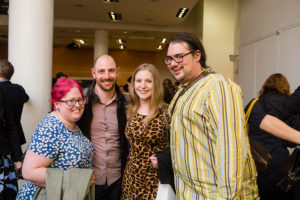 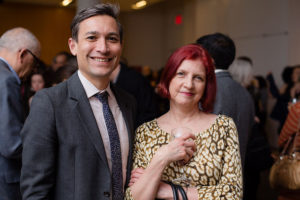 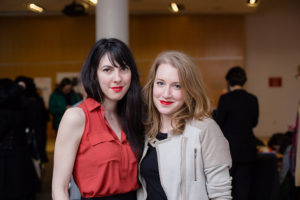 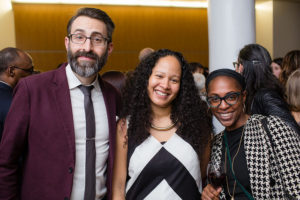 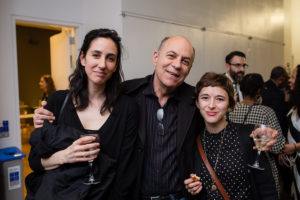 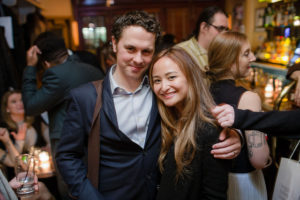 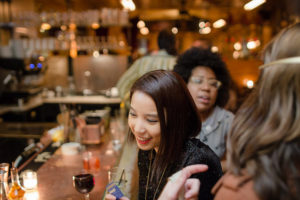 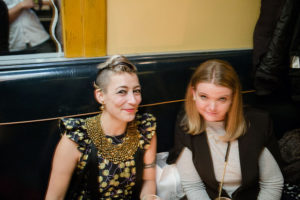 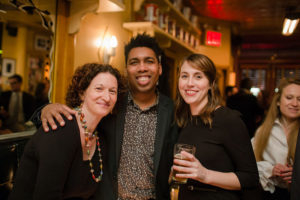 Wait Till You See Me Dance 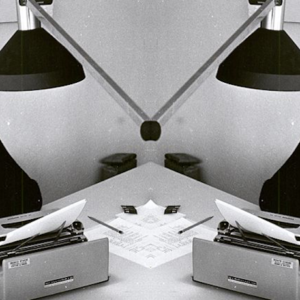