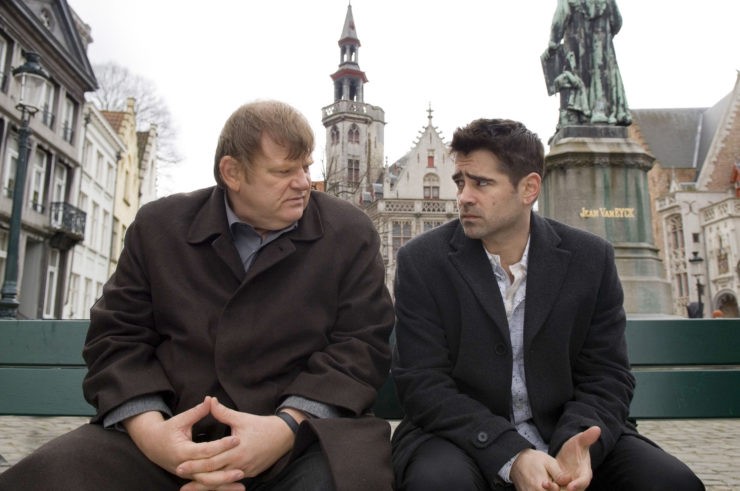 Deadline earlier today reported the truly stupendous news that Oscar- and Tony-winning playwright and filmmaker (and current squeeze of the all-conquering Phoebe Waller-Bridge) Martin McDonagh will soon be reuniting his In Bruges stars Colin Farrell and Brendan Gleeson for The Banshees of Inisheer, a new movie set on a remote Irish island and concerning “two lifelong friends who find themselves at an impasse when one abruptly ends their relationship with alarming consequences for both of them.”

In Bruges, a Guinness-black tragicomedy about two melancholy hitmen laying low in the maddeningly picturesque Belgium city after a botched hit, was the breakout directorial hit for McDonagh, who had already established himself as perhaps the most celebrated young playwright of the late 90s and early 00s when one play after another lit up the West End and Broadway. How celebrated are we talking? Well, in 1997, at the age of 27, he became the first dramatist since Shakespeare to have four works (from both his Leenane and Aran Islands trilogies) professionally produced on the London stage in a single season (he also got drunk at the previous year’s London Theater Awards and told Sean Connery to fuck off, which was arguably even better than the whole Shakespeare thing).

I bring up these twenty-five-year-old plays (raucous, blood-soaked hybrids of Tarantino, Pinter, and John Milligan Synge) for a reason. What Deadline this morning failed to mention (probably because no one really cares…) is that The Banshees of Inisheer is not strictly a new work. In fact, the script—which has achieved a near-mythic status among ardent McDonophiles and contemporary Irish theater fans alike—is the unstaged, unpublished, and long-buried final installment of his Aran Islands trilogy, which McDonagh dismissed as “not very good” way back when but vowed to return to someday.

Today is that day, my friends, and I can think of no duo better suited to bringing McDonagh’s banshees screaming back from the creative underworld than messers Farrell and Gleeson.

I am very excited.