Rebecca Solnit on Plutocracy and Its Paranoias

Ever since Trump was elected, we have been living through things that we would find overplayed and unbelievable in fiction and film and they keep on coming. Sunday night they came in the form of a rich, white sixty-something couple waving deadly weapons at a St. Louis Black Lives Matter march.

The casually dressed personal injury lawyers Mark and Patricia McCloskey looked incongruous in front of their imposing mansion. The mansion—or palazzo as this ostentatious midwestern imitation of Renaissance splendor in Italy is sometimes called—makes a claim to be a pinnacle of civility and culture and graciousness. So a man out front with a semiautomatic weapon and a woman waving a chrome-plated handgun “like it was a garden hose,” as one Twitter commentator put it, were in some ways undermining the claims their house makes. And in some ways reinforcing it. There was the trial lawyer in a pink polo shirt brandishing a black spewer of death next to a grand pale gray urn that made me think of the gardens at Versailles, but is apparently an imitation of urns at the Vatican.

But the lawyer was certainly thinking of Versailles when he told a local television station afterward, “We were threatened with our lives, threatened with a house being burned down, my office building being burned down, even our dog’s life being threatened. It was, it was about as bad as it can get. I mean, those you know, I really thought it was Storming the Bastille, that we would be dead and the house would be burned and there was nothing we could do about it.” If the fortress-prison known as the Bastille is being stormed, you don’t actually have much to worry about unless you’re defending the Bastille or you’re the ancien regime. And if you are, you should probably ask yourself some questions.

Of course McCloskey’s claims seem likely to be fictions or excuses taking place at the intersection of megalomania and paranoia. For the protestors to be threatening his office building they’d have to care who he was and the protest would have to be about him and there would have to be some coherent grievance against him personally. For them to be posing a deadly threat to him personally, there’d maybe have to be a recent history of mobs lynching white people in their homes. But they were just passing by.

They seem to believe the underclass is only held back from sowing chaos and destruction by the state’s threat of violence, and in the absence of that threat all hell will break loose.

They were on a march to the Mayor’s nearby home. People were outraged that she had publicly read off the home addresses of constituents who had written in to her about defunding the police, seeing that gesture as putting people at risk and violating their privacy (their names and addresses may have been on the record, but amplifying their visibility amplified their danger). So the first violation of private space—and the safety that each of us desires it be surrounded by—came from the mayor. As the Washington Post notes, “The public identification, or doxing, of activists is not illegal, but such an act carries a particularly fraught legacy in the St. Louis area: Since Michael Brown was shot by police in nearby Ferguson, Mo., six people connected to the protests that followed in 2014 have been found dead—some of them in violent, mysterious ways, the Associated Press reported.” The palazzo is less than ten miles from Ferguson.

It’s also true that private streets are oxymorons; streets are for walking and the free movement of the public; people should flow down them the way water flows along a riverbed, only sometimes there are dams, which we call gates and gated communities. The vast mansion sits at the corner of a major public thoroughfare and this street and sidewalk privately owned by a group, not by the McCloskeys personally. The protestors on the sidewalk may have assumed it was public; there’s irony in that the imposing palazzo itself looks more like a university or civic structure than what most of us think of as a home.

Ironically enough one of the protestors in the video seen more than 13 million times so far is wearing a “hands up don’t shoot t-shirt,” and the protestors in the footage I’ve seen don’t seem interested in the property, though of course they take notice of the guns being pointed at them. One young man waves everyone on. The Washington Post notes that the female half of the McCloskeys had her finger on the trigger; photographs show her pointing it straight at protestors; others note that the male half’s semiautomatic seems to be pointed at her some of the time. An article about their home notes, “The dining room is a re-creation of a residence chamber in the Palazzo Pitti in Florence, constructed in 1458 by Luca Pitti, though its more famous residents included the Medicis and Napoleon Bonaparte. It took six people an entire year to carefully remove multiple layers of paint glommed over the intricate woodwork.”

Since George Floyd’s extrajudicial execution prompted an uprising, one of the rifts running through American society has become more obvious, the one between those who think a society should rest on a foundation of liberty and justice for all and those who think it should rest on orderly property relations. We’ve seen the latter view often, in this uprising, in which a sector of the population downplayed the violence of the police against human flesh and life and played up the property destruction as the real chaos and crime (or preached that violence against life and limb should be imposed to protect lifeless property).

We saw it in New Orleans in 2005, in the wake of Hurricane Katrina, when wealthy white people sat on their porches with weapons awaiting the mob, according to Michael Lewis, and other white people went further, and in the name of protecting property shot Black men who weren’t actually doing stuff to property. Elsewhere, white vigilantes killed Black men—I wrote about this at length in my 2009 book A Paradise Built in Hell—and police killed other Black people, in one case for suspected shoplifting and in others for being Black people moving freely in a ruined city.

What the lawyers with the midwestern palazzo seem to think is what a lot of elite people and police seem to think: society is basically unfair, and they are willing to go to extremes to preserve that unfairness, since they’re on the winning side of it. They seem to believe the underclass is only held back from sowing chaos and destruction by the state’s threat of violence, and in the absence of that threat all hell will break loose (or you’ll have to walk out in your socks and pink polo shirt yourself and threaten your own violence). That is, to air one of their favorite cliches, that society is a thin veneer beneath which seethe all sorts of Hobbesian nastiness, and the veneer must be kept clamped on by any means necessary. It’s an assertion that other people are ruthless and dangerous, but as a justification for elites being themselves ruthless and dangerous.

Those elites project onto the masses their own ruthlessness and savagery; they fear others on the basis that they may be like themselves.

As Adam Weinstein wrote in the New Republic, “But the entire appeal of the Trump presidency, like Stand Your Ground, has been to flatter the id-impulses of excitable whites when they construct nonwhite people—their existence, their persistent presence, and their agency—as inherent threats to public safety.” This is where the protests began; with the assumption by white supremacy and the police that Black and Brown people are inherently threatening and therefore violence against them, including lethal violence, is inherently justified. They began with a man murdered in public for allegedly passing a counterfeit $20 bill, a small act against proper financial relations for which the penalty was extrajudicial homicide.

Here are elites willing to see others die to preserve orderly property relations—we saw another version of it a few months ago when wealthy and conservative businesspeople started suggesting it would be fine for people, people other than themselves, to die in order for the economy to come roaring back. Those elites project onto the masses their own ruthlessness and savagery; they fear others on the basis that they may be like themselves. I’m sure you want to kill me so I will kill you first.

That’s basically the plot of a movie about all this, Mr. and Mrs. Smith. Some years ago, a while after it came out, I watched it with fascination, convinced it was a biting allegory, not just an entertainment. In it Angelina Jolie and Brad Pitt play two assassins who are hiding their profession from each other while preserving the veneer—and here the word works—of an upwardly mobile young couple with what is supposed to be exquisite taste. Their existence is justified by their good looks, their good taste, and their skill at killing; the McCloskeys are a parody of them, with a lot less grace, good looks, and skill, and a lot more luxury goods. The grand finale is a brawl in their own well-appointed home and then an upscale home-and-garden store, with wreckage of china cabinets and kitchen fixtures galore. The movie seemed to me to be saying that the white upper middle class, when its aspirations were ruthless and its indifference to life was brazen, was no better than mercenaries. And of course there are a lot of literal murderers for hire in the people who decide to perpetrate climate change or push gun sales as gun deaths keep climbing or lobby to dismantle workplace and environmental safety standards. Or open up for business when that’s going to spread the pandemic.

But the white people who saw this as their country—and only theirs—to run are right in one key way: their time is running out. They are not literally threatened by violence, much, but they are threatened by something much more powerful, a revision of who matters and who will run things in the future, which is why BLACK LIVES MATTER is the central affirmation. Even to admit that this change is underway is dangerous, because then you might have to admit that it’s just and fair that others share power and opportunity and privilege. It’s safer for the status quo to imagine that the protests and protestors and uprisings are just violent and criminal, and that’s exactly what the McCloskeys seem to have done—imagined that a march for justice was coming for them directly in their fortress-palazzo. Which was in its own way an admission that they embody injustice. 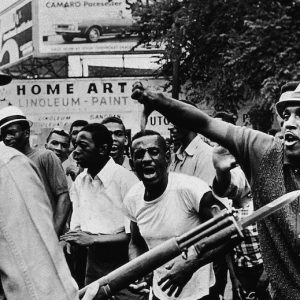 Letter From Newark: I Hated That I Had to See Your Face Through Plexiglass Dear ███, I never told you how we met. On May 11, 2008, as the sun scaled the sky, a New Jersey transit train smashed...
© LitHub
Back to top