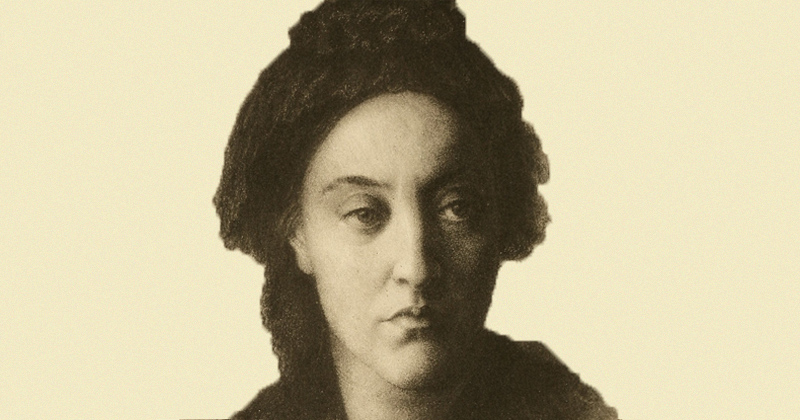 Christina Rossetti once wrote a poem calling out a suitor who would not take no for an answer.

In the late 1850s, the Pre-Raphaelite poet Christina Rossetti wrote a poem about her annoyance with a suitor who couldn’t seem to comprehend the fact that she didn’t want to marry him—despite her telling him so quite plainly. In a move that kind of makes her the Taylor Swift of the nineteenth-century (or really, makes Taylor Swift the Christina Rossetti of the twenty-first), she didn’t simply write about the incident, but included the suitor’s first name and published the poem in her debut collection Goblin Market and Other Poems in 1862. The poem is called “No, Thank You, John.” Which is an excellent title.

Evidence suggests that Rossetti’s poem was indeed based on a real issue she had with a suitor. In his 1908 biography Family Letters of Christina Rossetti, William Michael wrote “John was not absolutely mythical for, in one of her volumes which I possess, Christina made a pencil jotting, ‘The original John was obnoxious because he never gave scope for ‘No, thank you.’”

The poem seems to refer to their specific conversations about her refusal, with lines like “I have no heart?” and “don’t call me false.” And it features some absolutely fantastic punchlines, the best of which is: “I’d rather answer “No” to fifty Johns/ Than answer ‘Yes’ to you.” Damn.

Scholars have debated the identity of the “original John,” with many concluding that it was the Pre-Raphaelite painter John Brett. Rossetti’s biographer Violet Hunt notes that Brett had proposed to Rossetti and was rejected, and in 1858, Brett abruptly stopped work on a portrait he had been painting of her, never to finish it.

According to William Michael, Christina’s brother, the artist Dante Gabriel Rossetti, was probably aware of John’s full identity, and tried to prevent her from publishing the poem about him, claiming that it was “utterly foreign to your primary impulses” (meaning her impulse to write a poetry collection in the first place, which she didn’t decide to do to complain about boys). Her brother’s comment makes more sense if the poem was indeed about his colleague; he was probably worried about awkwardness in their artistic circle if she publicly criticized their colleague, her admirer (to be clear, I’m speculating here).

But her brother was also incorrect in his evaluation of “No, Thank You, John” as irrelevant to her project—even though Rossetti’s poem is a personal reaction to a private incident, its inclusion in her collection is enormously significant regarding the collection’s thesis. Goblin Market and Other Poems is a collection that offered alternate takes on female desire, friendship, love, experiences, and potential. “No Thank You, John” is about a woman who asserts her own desires, knows that she deserves to be happy on her own terms, and speaks up for herself when her choices are dismissed. It is about a woman who grows angry when a man acts as though he is entitled to her love or hand because of a positive rapport they may have had, or, worse, simply because of his own desire to have her, in the first place.

At the end of the poem, she offers friendship to him instead, which is a gesture not only of agency, but also an assertion of equality. Perhaps most effective is the speaker’s tone of weariness at having to break her feelings down to simple bullet-points so that they might finally be understood or accepted, and at having to explain this matter yet another time; few things feel so timeless as women exhaustedly, exhaustively explaining to men that they don’t owe them love.

I never said I loved you, John:

Why will you tease me, day by day,

And wax a weariness to think upon

You know I never loved you, John;

No fault of mine made me your toast:

Why will you haunt me with a face as wan

As shows an hour-old ghost?

I dare say Meg or Moll would take

Pity upon you, if you’d ask:

And pray don’t remain single for my sake

Who can’t perform that task.

I have no heart?—Perhaps I have not;

But then you’re mad to take offence

That I don’t give you what I have not got:

Use your common sense.

Don’t call me false, who owed not to be true:

I’d rather answer “No” to fifty Johns

Than answer “Yes” to you.

Song-birds of passage, days of youth:

Catch at to-day, forget the days before:

I’ll wink at your untruth.

No more, no less: and friendship’s good:

And points not understood

In open treaty. Rise above

Quibbles and shuffling off and on:

Here’s friendship for you if you like; but love,—

No, thank you, John.